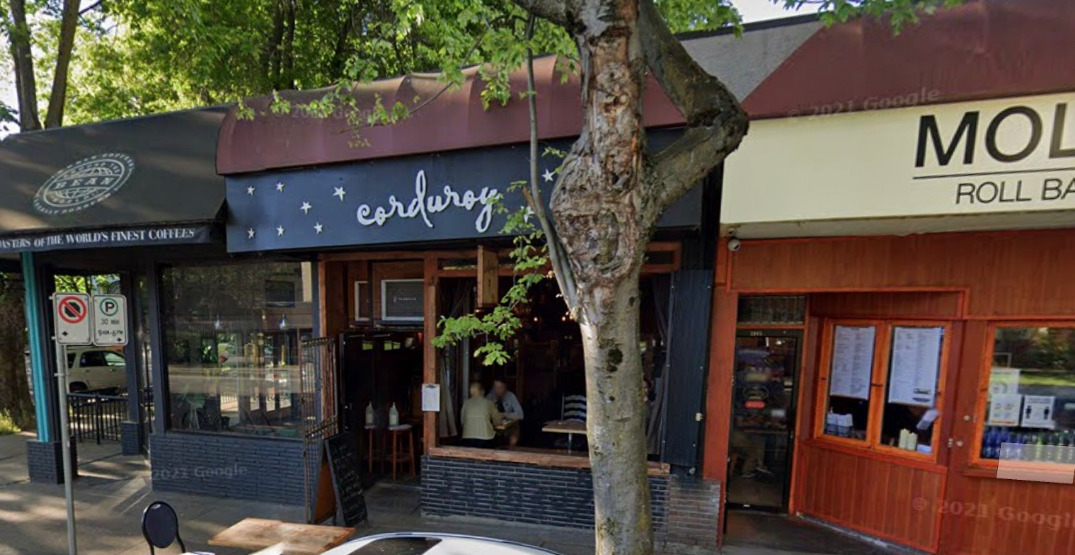 Almost a month after being ordered to close for defying public health orders, Corduroy Restaurant is permitted to operate again, but this time it’s for takeout only.

The Vancouver restaurant, located at 1943 Cornwall Avenue, will be operating cafeteria-style, as patrons are unable to dine-in at this time.

The City of Vancouver shared some information with Daily Hive Dished about the closure and subsequent reopening of the restaurant.

Vancouver Coastal Health issued a closure order to Corduroy Restaurant on October 20. The City followed up on that closure order by suspending the business licence.

At the time of the closure, the City confirmed to Daily Hive Dished that “as a result of the Vancouver Coastal Health (VCH) Closure Order to Corduroy Lounge, the City of Vancouver has suspended Corduroy’s business licence until December 31, 2021.”

Rebecca Matthews, the owner of the Kitsilano establishment, has gone on record numerous times in opposition to the provincial health officials.

In an Instagram story, Matthews suggested the reason they’re prohibited from offering dine-in is due to the fact that several employees have mask exemptions.

“The business licence suspension to Corduroy Lounge was lifted yesterday, November 15, because Vancouver Coastal has approved a revised Permit to Operate. This Permit limits Corduroy to takeout service only, and requires that an approved safety plan is in place,” said a statement from the City.

Daily Hive Dished has reached out to Vancouver Coastal Health for additional information on the restaurant’s partial reopening.