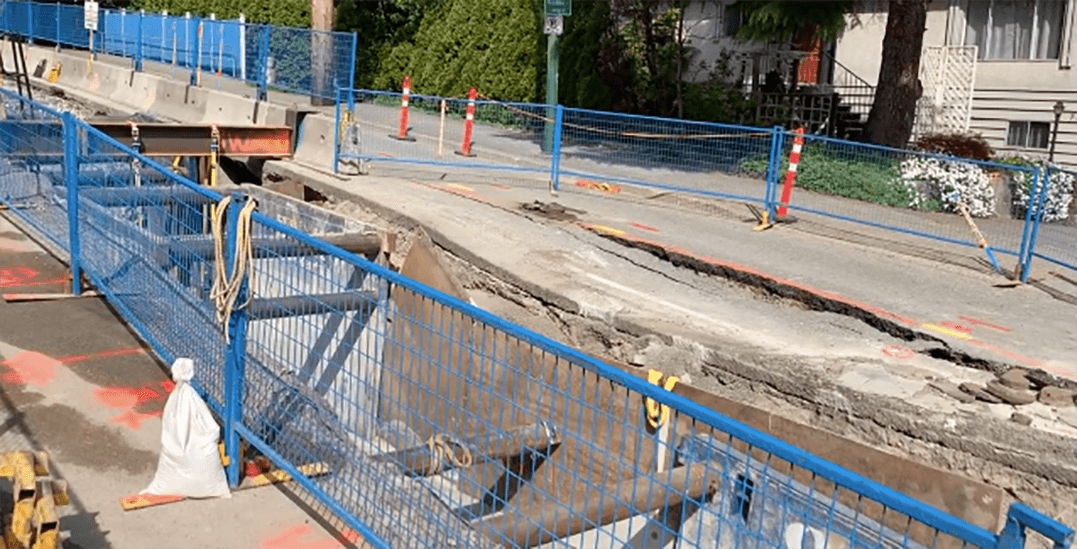 The Mayor of Coquitlam has taken to social media to express his disappointment in Fortis BC.

On Tuesday, April 31, construction crews noticed a sinkhole near the Fortis BC construction site at the intersection of Como Lake Avenue and Banting Street in Coquitlam.

Shortly after the news, Mayor Richard Stewart took to social media to voice his sentiment.

“Como Lake is a major East-West arterial through Coquitlam,” he wrote via Facebook post. “This unintended closure presents enormous challenges for residents, particularly as there are two elementary schools and a middle school along this corridor.”

Mayor Stewart explains that the repairs are also complicated due to the depth of the trench, which is 4.5 metres deep, as well as the settlement being located beside a stormwater main and Fortis BC’s existing 20″ gas main.

“Fortis BC caused a similar roadway collapse on another four-lane arterial in Coquitlam in 2017,” says Stewart. “That phase also resulted in several toxic spills of drill slurry into local creeks, along with unexpected road closures.”

The mayor also explains that initially, the City of Coquitlam had chosen to reject Fortis BC’s work permit on this phase.

One of the major reasons was that Fortis BC, according to Stewart, had intentions of “abandoning” the current 60-year-old gas main, as opposed to removing it during construction.

He says that Fortis BC argued that if the City of Coquitlam wanted the pipe removed, the burden of cost should fall upon the city’s taxpayers.

“That utility space is very important, and shouldn’t be allowed to be expropriated by a private company for the benefit of their shareholder,” says Stewart.

In the end, however, the British Columbia Utilities Commission overruled the City of Coquitlam and allowed the installation to proceed.

Fortis BC notes in a recent statement that they have rigorous operating policies to quickly respond to the situation. An estimated timeline on repairs, however, has yet to be made public.

A spokesperson from Fortis BC stresses that despite the Mayor’s description, the incident is not a sinkhole, rather, ground movement on the construction site.

The section of the road is expected to be opened by early next week.