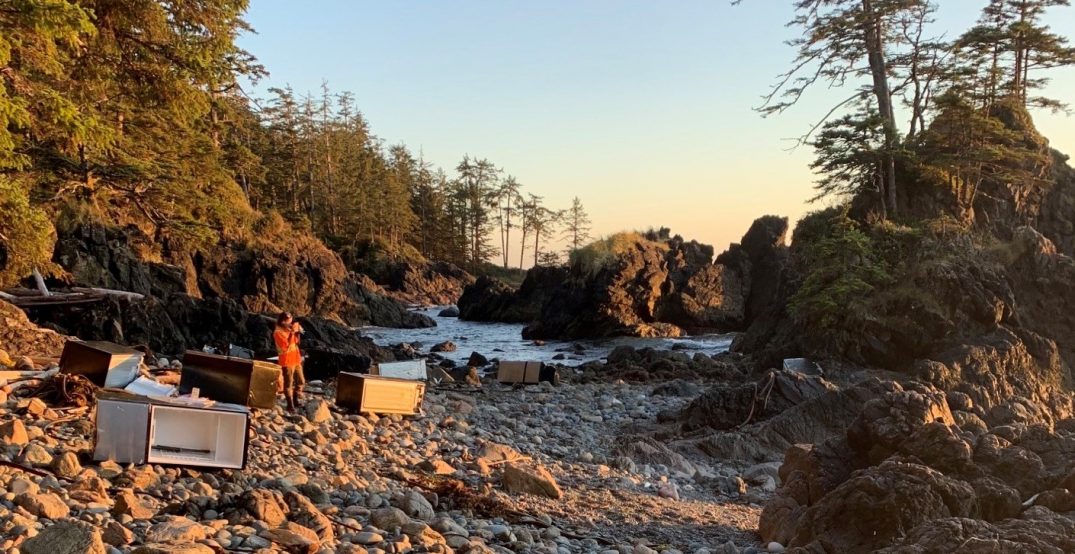 An extensive clean-up is underway in BC and an immense amount of materials have already been picked up off of Cape Palmerston Beach after a container ship’s cargo went overboard.

According to an update from Unified Command, four out of 40 missing containers that fell off the M/V Zim Kingston earlier this month have been accounted for.

They’re still on the beach and are planning to remove them via helicopter soon, although one of the containers is breached and one is damaged.

#CCGLive: The owner of the #ZimKingston has hired a contractor to remove debris from the beach as well as recover the containers. As of this update, no other containers have been found on shore. pic.twitter.com/BaSO6fQsr6

On Friday, October 29, and over the weekend, contractors who were hired by the owner of the M/V Zim Kingston began to organize and remove debris from the containers on the beach.

No other containers have been found as of this update. The initial four containers were found on shore, and only one of these was breached. The search for more containers continues. pic.twitter.com/kfDELhoxIL

Then, by Sunday afternoon, a total of 71 refrigerators, 81 bags of Styrofoam, 19 bags of garbage, and 11 helicopter bags of garbage were flown off of Cape Palmerston beach and into metal bins in a nearby parking lot.

According to the update, responders will continue to clean up debris as the weather permits on remote impacted beaches, including Guise Bay. The Environmental Unit is working with First Nations to identify any resources at risk in the affected areas.

#CCGLive: Shoreline cleanup has begun! Crews hired by the #ZimKingston owners were on the beach at Cape Palmerston yesterday & today to remove debris. 38 bags of Styrofoam were collected yesterday & 40 fridges have been moved above the high water mark for removal. pic.twitter.com/5ZuG3UdZS3

As for the M/V Zim Kingston ship itself, which is still in Constance Bank, efforts to stabilize the cargo continued over the weekend.

Results of an inspection are being reviewed by Transport Canada and the results of a water sampling operation to detect contaminants in the water are expected soon. The Coast Guard is standing by to help support operations.

Our inspectors boarded the #ZimKingston on Friday in order to do a marine safety compliance inspection. We are working with our federal, Indigenous, provincial, municipal & industry partners to ensure the safety & security of the marine environment in BC. pic.twitter.com/6e4yidexgZ

The vessel was originally headed to Vancouver from South Korea when it lost containers at sea and experienced a fire inside some of the onboard containers shortly after. The fire has since been put out, but many containers are still missing.

The Incident Command Post is still looking for floating or beached containers. If you find one, don’t open it and call 1-800-889-8852 immediately.

Daily Hive has reached out to Beecher Bay First Nation and W̱SÁNEĆ Leadership Council for comment and will update this story.