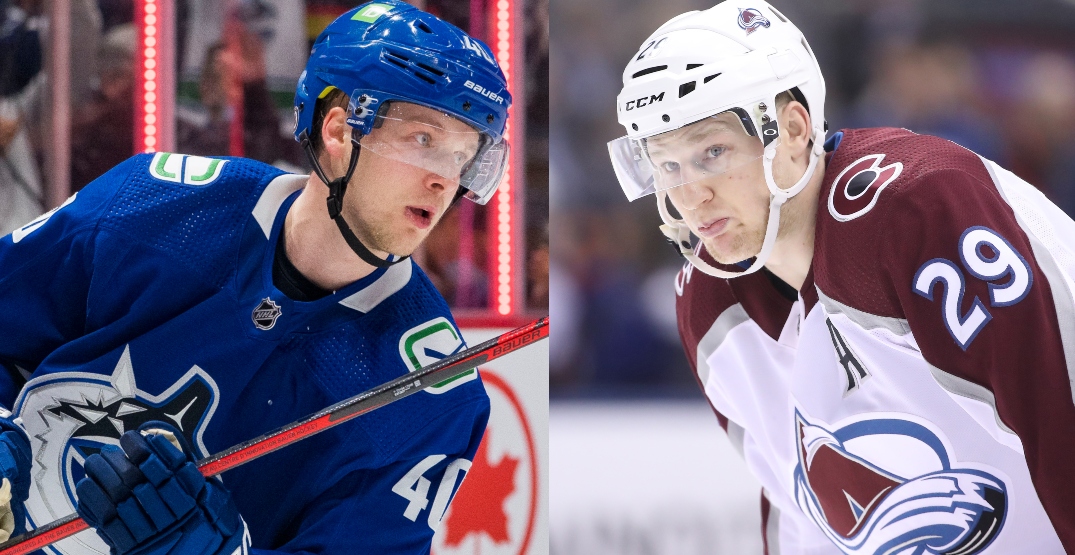 Now in his fourth NHL season, instead of hitting his prime, Elias Pettersson is trending downward.

Through 34 games this season, Pettersson has just six goals and 17 points. That half-point per game average is well below the 0.92 points per contest he posted during his first three NHL seasons.

Pettersson’s current struggles eerily reflect those of another star NHLer.

Nathan MacKinnon has now solidified himself as one of the NHL’s best, but his career arc wasn’t smooth.

The Halifax native won the Calder Trophy as an 18-year-old when he posted 63 points in 82 games. However, he didn’t become a true superstar until his fifth NHL season.

Could Pettersson join MacKinnon on a similar trajectory?

The consensus of MacKinnon before 2017-18

As a first overall draft selection, MacKinnon was touted as a potential NHL superstar.

Four years after he was drafted though, he only had 206 points in 300 NHL games.

His 0.68 points-per-game average aligned more with a second-line player rather than a star NHLer.

It’s important to remember though, that MacKinnon hadn’t even turned 22 years old when his fourth season with the Avalanche came to a conclusion in 2017-18.

Still, that didn’t stop the franchise player from doubting his own abilities.

“I was scared of being a bust,” MacKinnon said in 2019. “I was labelled the next Sidney Crosby my whole life.”

The bust label would have been harsh, even at the time. However, the consensus was that MacKinnon was a streaky player.

The disappointment of MacKinnon’s fourth NHL season had to be the most troubling. He was a star at the World Cup of Hockey before the season started, where he scored unreal goals like the one below.

Despite his World Cup breakout, the Avalanche were historically bad the next season, finishing dead last in the NHL with a putrid 48 points.

Following that disaster of a season, MacKinnon unsurprisingly wasn’t happy with his play.

Differences between Pettersson and MacKinnon

From a Canucks perspective, it’s easy to daydream about Pettersson having a MacKinnon-like breakout during Year 5 of his career.

However, there are some key distinctions that have to be made between the two players.

To help understand those differences, here’s a comparison of Pettersson and MacKinnon’s per-60 even-strength production during their first four NHL seasons.

With these numbers in mind, here are four key differences between the two forwards.

1. MacKinnon was nearly two years younger than Pettersson when he broke into the league

Not many players can bust into the NHL as an 18-year-old and have success. Although his career stagnated for a couple of seasons, you had the sense that MacKinnon could be a special player once he was insulated by a good team.

2. Both played on bad teams going in different directions

The Avalanche had a meteoric rise up the standings after drafting MacKinnon. They finished as the third-best team in the league with 112 points, just one year after being bad enough to land the first overall pick.

Colorado then trended downwards for three seasons before finally hitting rock bottom in 2016-17.

Understanding that helps put MacKinnon’s struggles into perspective. There was less talent around him on the team in Years 3 and 4 of his career, where his even-strength scoring plummeted to a low-end second-line rate.

Pettersson, on the other hand, has been on a squad that’s yo-yoed up and down the standings.

The Canucks overachieved in 2019-20 before drastically underachieving in 2020-21. This season, the fact that they’re sniffing at a Wild Card berth probably reflects their true talent.

You would think that would coincide with more production from Pettersson but clearly, that hasn’t been the case.

3. MacKinnon never had a stretch as bad as Pettersson this season

You can see from the chart above that MacKinnon never posted fewer than 1.63 points per-60 at even strength.

In Year 4 of MacKinnon’s career when the Avalanche were the NHL’s worst team, the youngster still had nine goals and 25 points in 34 games.

In short, MacKinnon was never as ineffective as Pettersson has been this season.

Pettersson’s 0.65 points-per-60 are below replacement-level bad (one point-per-60 is roughly a 4th line rate).

Among 447 forwards to play more than 100 minutes at even-strength this season, Pettersson’s points-per-60 ranks 409th.

Virtually every player down in Pettersson’s tier are bottom-six forwards at best.

4. MacKinnon shoots more than Pettersson… by a lot

Well, not much has changed since.

That’s a career-low for Pettersson, but as you’ll see below, even his career-high pales in comparison to MacKinnon.

In fairness, MacKinnon is one of the highest-volume shooters in the NHL. Over the last three seasons, only five forwards have fired the puck at 5-on-5 with more regularity than the Avs’ best forward.

Pettersson, on the other hand, relies on picking his spots. He ranks 356th among 450 NHLers in terms of even-strength shots per 60 over the last three seasons.

The glass-half-full thinking here is that Pettersson is an elite scorer who has suffered rotten puck luck this season.

When you look at some of the goals he scored previously, that’s easy to believe.

The glass-half-empty approach? Pettersson enjoyed tremendous puck luck during his first three seasons. During that time span, he has the fifth-highest even-strength shooting percentage in the NHL.

No matter which side of the argument you’re on, it’s clear that Pettersson needs to shoot the puck more.

It’s also evident that despite struggling at comparable points in their respective careers, most of the similarities between the two star pivots end there.