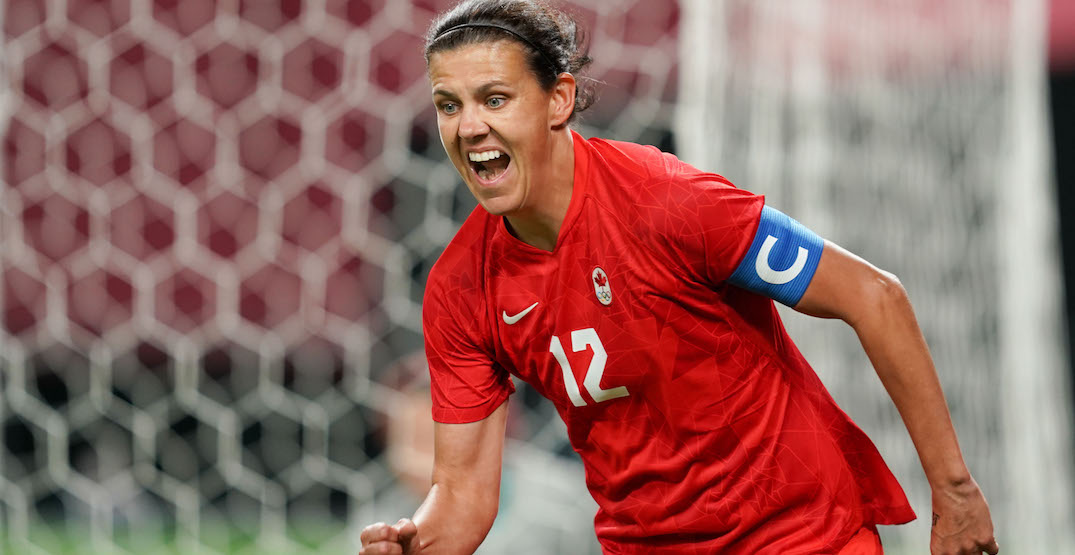 There was a time when Christine Sinclair didn’t think winning an Olympic gold medal with Canada would be possible.

Since 2003, Canada has never been ranked lower than 13th in the world in women’s soccer. Respectable, sure, but gold medal contenders? Well, that was a fairly new development.

“To be honest, I thought I’d be well done in my career before Canada won a gold medal,” Sinclair said from Portland in a video call with Daily Hive. “When I first joined the national team we were losing, like 9-0 to the Americans on a regular basis.”

Sinclair, who made her national team debut in 2000, says the London 2012 Olympics were the turning point. Thanks to one of the greatest Olympic performances in Canadian history by Sinclair, who scored a hat trick, Canada nearly beat the US in the semi-final in that tournament. They settled for bronze.

“London really changed everyone’s perception of what we were capable of,” said Sinclair. “[Four years later] in Rio, I was disappointed that we didn’t win gold.”

The national team program has evolved in the last 10 years, first under the leadership of John Herdman, and then by current head coach Bev Priestman.

In the twilight of her career, the 38-year-old didn’t put the team on her back in Tokyo, but she didn’t need to.

The supporting cast around her was better, allowing her to lead in other ways.

The all-time international goals leader scored in the tournament opener to help earn a valuable draw against Japan, and drew a foul that led to Jessie Fleming’s PK in the gold medal match.

Sinclair put the team above herself, telling the coach that she was no longer the team’s best PK option.

“I missed [a PK] against Brazil and I told our coach that the person stepping up has to be 100% confident and I wasn’t there in that moment.”

Fleming went four-for-four on penalties in the tournament.

“Thank god I said something to the coach,” Sinclair said.

After being subbed off in the final, Sinclair was forced to watch the penalty shootout just like the rest of us.

“I think Desiree Scott and I had a heart attack on the bench… That shootout was the biggest roller coaster of emotions in the span of like 10 minutes.”

COVID-19 made things difficult for Sinclair and her teammates — there were cancellations, matches in empty stadiums, and countless COVID tests.

But if there was one silver lining, it was that the Olympic bubble allowed her and her teammates to celebrate as a team.

“There are so many moments I’ll never forget,” Sinclair said.

“I’ll never forget, obviously in the locker room with the champagne to celebrate with the team. Then the bus ride back to the athlete’s village. That night was just chaos… The next three days we just celebrated as a group, which we hadn’t had a chance to do in the past.

“Those are the moments I’ll never forget.”

The party when the Burnaby native returned home in August was pretty special too.

Sinclair said the hardest part of this gold medal journey was being apart from her family. She stars for the Portland Thorns, which during normal times is a relatively short drive from home.

But border restrictions meant that Sinclair didn’t see her family for nine months.

“I think like the hardest part for me, being in the US, was just the inability to see my family. I’m such a homebody and I love my family so much,” she said. “I went like nine months without seeing them.”

“They’re my biggest support. Not being able to see them on a regular basis, not being able to come down here because of restrictions, that for me was the most difficult part.

When Sinclair returned home from Tokyo, friends and family threw her a surprise party, while following COVID protocols.

“It was supposed to just be, I thought, like myself and a couple aunts and uncles and cousins, a little get together barbecue. And then I had friends from elementary school show up. It was unexpected — incredible… With the pandemic, I hadn’t seen some of my family for like a year and a half, so that was special.”

Prior to Rio 2016, I foolishly asked Sinclair if it would be her last Olympics.

I didn’t ask the same question this time, but I did want to know what fuels her to keep going. Sinclair said she wants to keep playing as long as she can, and that ties in well with a new partnership she has with Get Cracking.

“A lot of people ask me about my career, and the longevity of it and how I’ve been fortunate to play as long as I have, and I think nutrition for me is one of the vital parts of my daily routine,” she said. “Even before this partnership, I eat eggs every morning for breakfast. It’s just part of my routine and so this partnership is perfect for trying to stay healthy as long as I can.”

“Our national program will get left behind”

Through all the joy and excitement of Canada standing at the top of the podium in a global sport like soccer, there are warning signs that this may not be sustainable.

Sinclair was among the players sounding the alarm about the sport in this country.

It’s telling that in the days that followed the gold medal triumph, that Sinclair used her platform to raise awareness about the lack of support top level women’s soccer players get in Canada.

Not only does Canada not have a professional women’s league, our country doesn’t even have a franchise in the American-based NWSL.

“I think it’s important for people to know that of the top 10 or 12 ranked teams [in the world] on the women’s side of the game, Canada is the only country that doesn’t have a professional environment for their women to play. As Canadians, we pride ourselves on equality. If you’re going to say it, you actually have to do it.”

If things don’t change, Canada risks falling behind on the world stage.

There are three MLS teams based in Canada, as well as the Canadian Premier League, for men’s players. Someone was willing to task the risk to make those teams a reality, and the same needs to happen for women’s sports in this country, Sinclair says.

“We’re just missing out, as a country. But honestly, it’s just the right thing to do.”