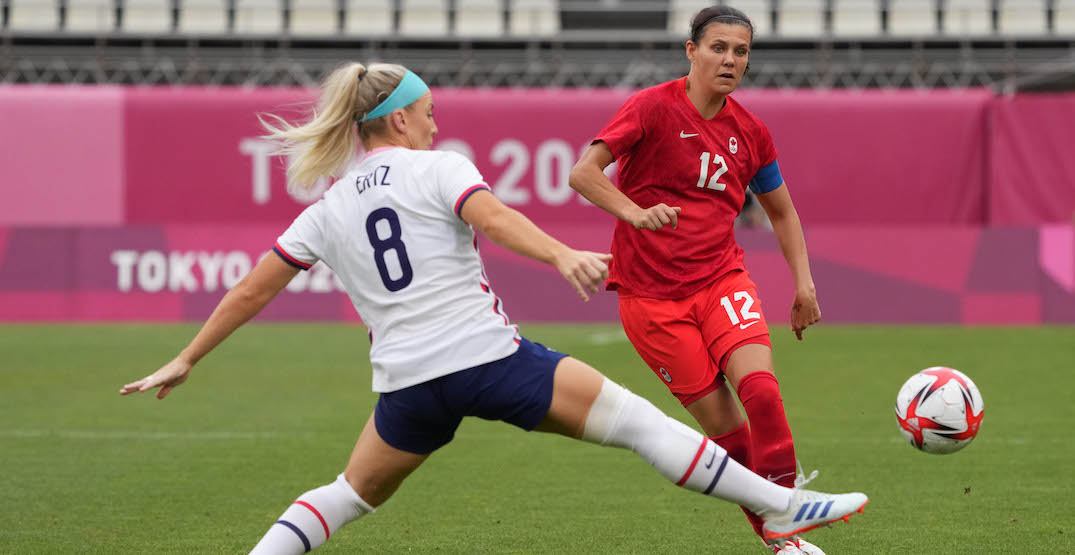 Christine Sinclair is hoping Canada’s historic gold medal victory at the Tokyo Olympics will provide new opportunities for women’s soccer across the country. Since winning gold, Sinclair has been among the players using her voice to call for bringing women’s pro soccer to Canada.

Elite-level Canadian soccer players currently have to play in the United States or across the pond in Europe.

Once a player climbs through the youth ranks, there is no option to play professionally at home. Sinclair has played for the NWSL’s Portland Thorns since 2013, for instance. Nearly half of Canada’s Olympic gold medal winning team play their club soccer in Europe. None of them play professionally in Canada.

Canada is the only FIFA top 10 ranked country without a pro women’s soccer league, and Sinclair wants to see that change.

“We’ve been saying it for a long time,” Sinclair explained to the media via Zoom recently. “We’re hoping that this platform will give us the opportunity to start that change and plead to Canadians that have the ability to make the difference to invest in women. The young little kids, they deserve to be able to go watch their heroes on a week-to-week basis and not [just] every four years.

“That’s the next goal, to get professional soccer in Canada.”

Stephanie Labbé broke it down and talked about having a women’s soccer league, or at least professional teams in Canada ⬇️

“To be Olympic champions [and] to not have a professional league, that’s something we have to go towards,” Canadian goalkeeper Stephanie Labbe told CBC television. “We need young boys and girls to see us to see us on TV. [For] older generations to be able to go to a bar, go to a club, see our games on the TVs, have a beer with each other, celebrate around it. The fact that we don’t have that right now is unacceptable and we want to continue to be visible, we want to continue to be role models, but we can’t do that once every four years during a World Cup or Olympics.”

Sinclair wants to see more funding and investment in women’s soccer. Whether it’s from big businesses, or a wealthy individual, the all-time international goals leader wants to see a potential ownership group take the necessary steps to bring an NWSL team in Canada.

“I think the short term goal should be NWSL,” Sinclair explained. “Similar to how it was with MLS bringing franchises to Canada. It seems like the easy logical step. It just takes some wealthy individuals within Canada willing to invest in women’s soccer… Companies do that on the men’s side all the time and are willing to lose millions of dollars. I think within Canada, it’s people willing to do that for the women’s game. Some people with some deep pocket books willing to take a chance.”

Reminder to everyone in Canada, women athletes are calling for professional leagues. And have been for a LONG time. You do not get to celebrate their #Olympics wins and then ignore their requests for support and sustainable leagues. That is not how this works. #CAN

Bringing an expansion team to a city in any type of sport isn’t as easy as it may sound. There’s a lot of important details to take into account and they all cost money. That includes finding an ownership group, stadium and practice facilities, navigating roster regulations, finding club staff, having a devoted fan base and dedicated media coverage, there’s a lot of  hurdles and requirements.

“First of all it starts with great ownership and ownership that is invested in the long term,” Baird explained. “I think that with ownership there has to be a stadium solution. We’re lucky enough to have a good collaborative relationship with MLS. Creating synergy with an existing MLS owner who wants to own a team or whether it’s a specific NWSL owner that wants to create a partnership with a stadium, that’s a second element. It’s ownership, and stadium solution.

“The third part of it is the fans. One of the things I monitor is what are local journalists writing about the NWSL in markets where they don’t have a team. That element is what bodes well for long term success, the investment of the community at large, including journalism.”

The interest generated following Canada’s triumphant gold medal win at the Olympics has been substantial. Over 4.4 million Canadians tuned in to watch Canada win gold, despite the early-morning start time for parts of the country.

The primary focus for the NWSL still seems to be on growing the game in the United States. Heading into the 2022 season, the NWSL will expand to 12 teams with Los Angeles and San Diego getting new NWSL teams.

Baird would not say whether or not there has been any new interest from potential Canadian investors since Canada won gold.

“I’ve heard from fans in Vancouver, Toronto and other places that they would love to have a team,” Baird explained. “It’s certainly something that I and the ownership will seriously consider as we finalize our expansion plans.”