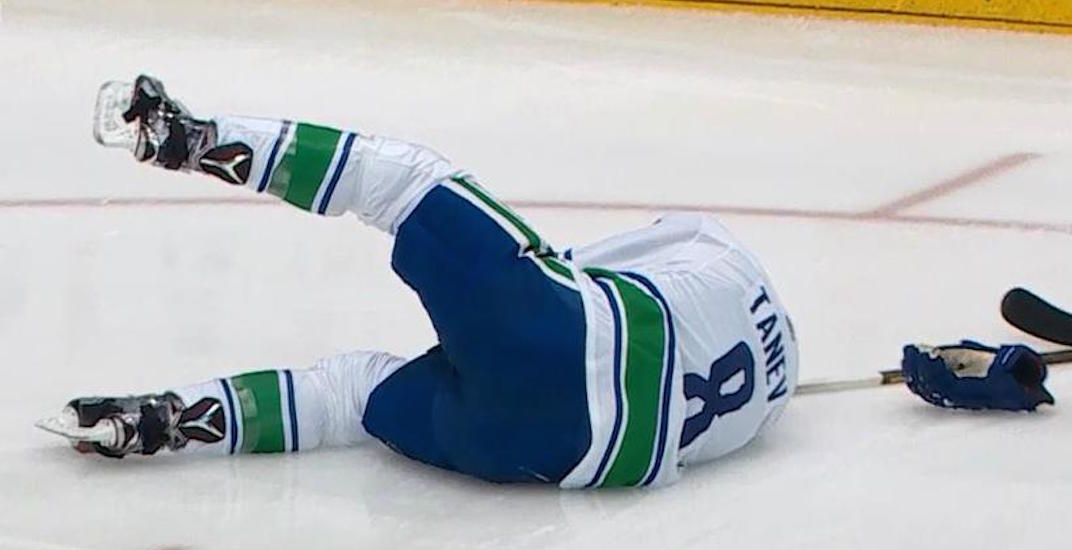 Chris Tanev is a warrior.

The lanky blueliner plays all the tough minutes against the other team’s best players, and has been the best Canucks defenceman for a few years now.

But man has he been hurt a lot.

Whether it be bad luck or a product of the rugged style he plays, Tanev is routinely on the shelf with injury. Too bad, because he’s one of their most reliable players when he’s in the lineup.

Tanev’s latest injury though, may be his most gruesome one.

The 28-year-old took a Morgan Rielly point shot in the mouth on Saturday, causing him to lose blood – and some teeth.

Michael Del Zotto had to go searching for chiclets because of it.

If that doesn’t make your stomach queasy, I don’t know what will.

And it gets worse.

not only did Tanev get teeth knocked out last night, some that remained in his mouth were embedded in his tongue. #canucks

While losing teeth makes my stomach turn, that wasn’t the biggest injury concern. Hockey players are tough, and losing a few pearly whites alone wouldn’t necessarily keep him out of the game. Sportsnet’s Dan Murphy reports that Tanev rode a stationary bike in full gear during the first intermission, staying warm just in case he got medical clearance to return to the game.

No Tanev for #canucks tonight. Nothing broken but will need surgery on gums. Hopes to play in WSH, CBJ + MIN then have surgery in bye week.

Luckily for Tanev, he didn’t suffer a broken jaw or a concussion. He’s with the team in Montreal, but won’t play in Sunday’s game given just how much damage there is to his mouth.

He was eating yogurt for lunch.