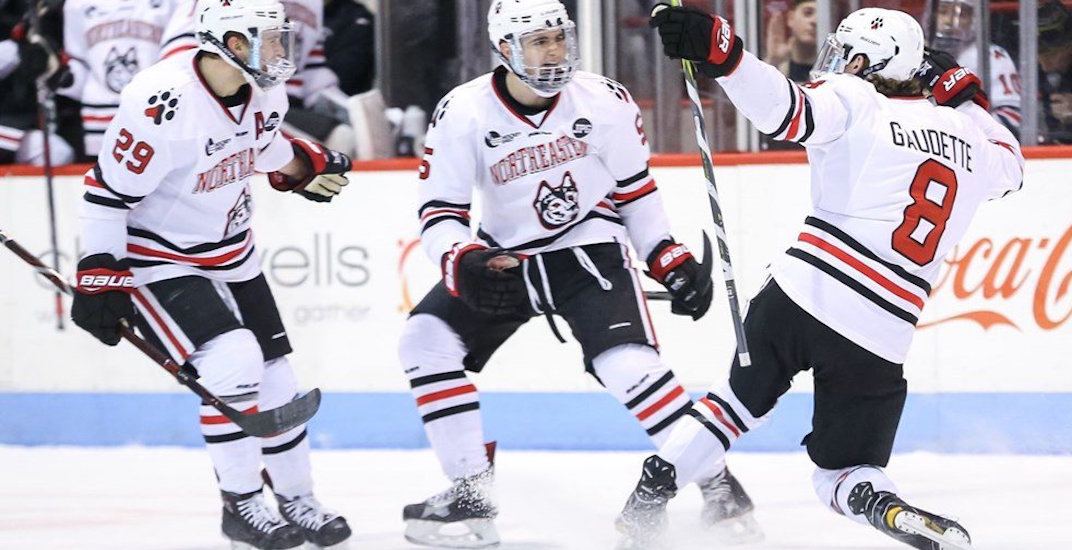 Picked in the fifth round of the 2015 draft, Adam Gaudette wasn’t supposed to be a top prospect.

Unlike players picked in the first few rounds, Gaudette didn’t get to put on a Canucks jersey on the draft floor of an NHL arena. Instead, the Braintree, Massachusetts product found out while with his family in a backyard.

My how times have changed.

Gaudette has been excellent since joining Northeastern University after he was drafted, scoring 30 points in 41 games during his freshman season before adding 52 points in 37 games in his sophomore year.

He’s been even better this season.

With two goals and two assists on Saturday, Gaudette has pulled into a tie for first in NCAA Division I scoring. The 21-year-old centre now has 30 points in 20 games, pulling even with Henrik Borgstrom from the University of Denver, in one fewer game.

Here’s a look at his first goal:

The 6-foot-1, 183-pound forward is on a six-game point streak, scoring 12 points during that span. Like his first goal on Saturday, he followed up his own rebound to tickle the twine for his second.

Here is Adam Gaudette's second goal from tonight – stopped on the first chance, follows up to put it home#Canucks pic.twitter.com/WwHSQ6MGrd

An NHL career might not be far away for the youngster – maybe as soon as a couple of months from now.

Like Brock Boeser last year, Gaudette is eligible to join the Canucks after his college season ends. He could join the team for the tail-end of Vancouver’s schedule like Boeser did, which would ensure he doesn’t to return to Northeastern for a fourth year of NCAA hockey.

Should he play out his senior year, Gaudette could become a unrestricted free agent in the summer of 2019.

In an interview with TSN 1040 in November, GM Jim Benning said that Gaudette could fit into a fourth-line role to start, and work his way up the lineup.

That’s what Bo Horvat did to start his career, and certainly if Gaudette can come close to that level of play, the Canucks will have indeed found a diamond in the rough.