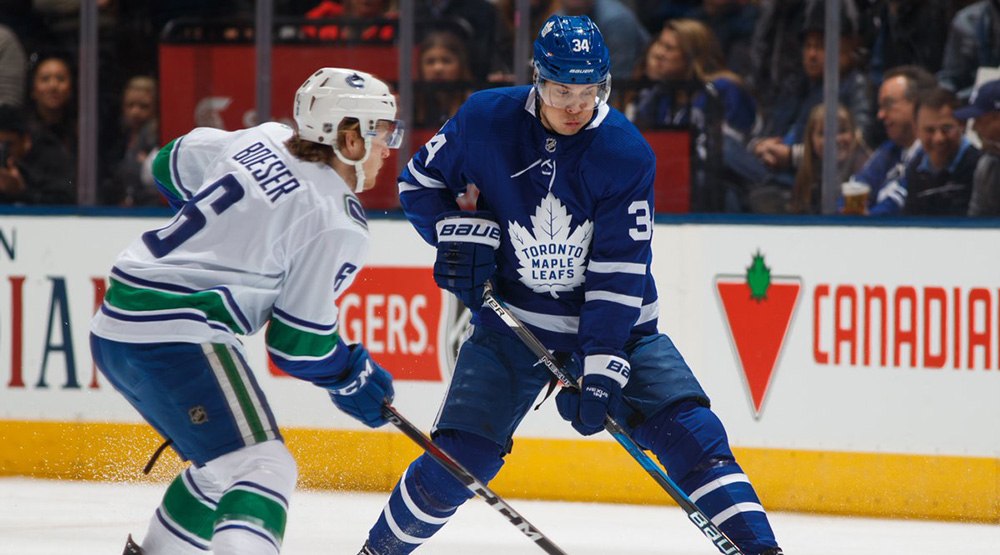 That was about all Canucks fans could ask for.

Aside from the Tanev injury, that is – and I’ll get to that later.

First, Boeser was amazing. He scored, he played well defensively, and he came closer to winning the game in overtime than Gordon Bombay when he hit the post with the triple deke.

Third, the Canucks lost, which you know if you’re really being honest with yourself is best for them in the long run.

And fourth, Don Cherry lit a fire under the Gudbranson to the Leafs rumours and maybe even made Leafs fans want him.

So yeah, Vancouver lost 3-2 in the shootout. But again, with the way they’ve been playing the last few weeks, it was a win. Need proof of how low the bar’s fallen?

Green: “We come out and play a great hockey game. We lose in a shootout. That’s just reality, someone’s going to lose. I’m really happy with our effort tonight. Don’t get me wrong I hate losing but you have to be realistic with your group.”

You have to be Realistic.

Hey, it’s better than Compete is in our Nature, isn’t it?

I heard Boeser went a few games without doing too much while I was off. I’m happy to report he ended that against the Leafs on Saturday. Happy because, let’s be honest, Boeser is almost the only reason Canucks fans are tuning in anymore.

What’s better is seeing the coverage he’s starting to get across Canada. CBC gave Boeser the red carpet treatment and as he always seems to do, he showed no signs that he’ll ever wilt under pressure. It wasn’t just goals and offence either.

First shift of the game, here was Boeser taking on Auston Matthews, and winning.

Later in the first, check out his steal as Toronto was about to break out.

There was offence too. The Boeser-Gagner-Vanek line was buzzing all night, ending the game as by far the team’s most potent line with a plus-five shot attempt differential. Toronto was playing Boeser tight and giving him no space, and it took a broken play he created himself for him to score.

You know the old saying: give Boeser an inch, he’ll get a goal.

Checking out how much time the puck spent on his stick after Vanek’s perfectly placed pass, you see he wasted no time and placed it perfectly.

I also mentioned how he came as close as humanly possible to winning the game in OT. He came so close to scoring, it actually fooled the referee, who signalled a goal for the Canucks.

See what I mean?

One last Boeser thought: this tweet is from the Athletic’s Dom Luszczyszyn:

The world is noticing, you see?

Hey, what’s MDZ up to here…

Del Zotto says he picked up four of Chris Tanev’s teeth off the ice. #Canucks

Oh… that does not sound nice.

It’s confirmed then – that was not nice.

Tanev got hit in the face with that shot early in the game and Vancouver went with five D for the rest of the game.

Tanev won’t be back after taking puck in face. Canucks biggest fear will be broken jaw like Beartschi.

Sadly, that’s a description that can be used for both Tanev and the entire Canucks roster this season.

You probably already heard Don Cherry’s take on what Toronto would have to give up in a trade for Gudbranson. I tweeted it out during the game, but I still had to go back and make sure I wasn’t just imagining things.

“Ooo do I like that guy (Gudbranson). He played for Kingston, Ontario. You would love him to come here but you’d have to give up a guy like Brown or Marner or something like that… they’ll pay dearly for him, but I like him. He was at the prospects game, he got his ear all cut.”

Anyway, back to reality – Gudbranson was the worst Canucks skater with a minus-6 shot attempt differential.

He also made the kind of play on a 2-on-1 you often see at Stick and Puck at UBC arenas.

At his presser during the week, Linden was asked if Benning needs to move a defenceman in order to make the number of players Vancouver has on the back end more workable:

“We’ve finally gotten healthy on the back end and that’s creating a bit of a logjam right now. Obviously the play of Derrick Pouliot has been good and even Alex Biega’s come in and pushed hard for a spot so it’s created some challenges there, but those are good problems to have.

“We’re not in any rush to do anything. If something comes our way that makes sense that makes us better, we’ll look at it, but we’re not looking to move anyone out.”

No rush? Something tells me if the Leafs offer Marner or Brown, he’ll be in a rush.

Asked if the Canucks have had any discussions with Gudbranson about re-signing him:

“We haven’t really had discussion on re-signing him yet. Obviously we’ve been in contact with his agent throughout the year and we’re in a situation where we’re just going to see how these next 6-8 weeks unfold.”

Look, it’s early to have had conversations on re-signing Gudbranson – he just became eligible for an extension on January 1 – still, if Guddy’s extension depends on the way he plays the next few weeks, it’s not off to a good start.

Not that that’s a surpise.

I’m sure there’s a ton of confirmation bias involved in the way we’re all watching Edler now. Every time he has the puck on the power play we’re just looking for him to pass on passing it to Boeser.

Still, there’s something there.

During a first period power play, Boeser was just begging for a pass here.

This last one wasn’t even Boeser he ignored, it was Gagner, which supports my theory…

Edler has one goal this season and hasn’t scored on the power play since last season. To me, his unwillingness to pass to Boeser is actually just an extreme desire to keep shooting the puck every chance he gets and to try to get himself a goal.

He led the Canucks in shot attempts against the Leafs with 12. Next highest for the Canucks was Boeser with 6.

Edler is shooting the puck every chance he gets. Sadly, it’s often coming at the expense of Boeser’s obviously more lethal and accurate shot.

The last thing we shouldn’t overlook from Saturday’s game against the Leafs is the role Markstrom played in nearly getting Vancouver two points.

He was dialled in all game long. Here he was early.

Here he was doing Marky things.

Which meant Canucks fans should get nervous as the inevitable softy approached, obviously…

Didn’t see it? Neither did Markstrom.

Luckily for Vancouver, the goal was called off after a review showed Toronto was offside. And that was it for softies. Unfortunately Matthews and Bozak got the best of him with quality goals in the third period.

While I was off, I also missed Linden’s address with the media on January 3.

The biggest talking point was obviously regarding Jim Benning’s future.

Here was Linden’s answer when asked if there’ve been any talks on re-signing Benning.

“I’m not going to get into that at this point. I think it doesn’t serve anyone any purpose. I think we’re focused on having a good second half here. I know Jim’s focused on that

“I think he came into a challenging situation and I think we’re trending in the right direction. I like the job Jim’s done, but beyond that, I think we’re focused on the next couple months and the deadline and then finishing and having a good season.”

Is that the vote of confidence you’d expect from Linden on the GM he picked?

I’m just going to show you what Linden said when he was asked on March 1, 2017 if Vancouver would be re-signing Willie Desjardins:

“I think we’re going to take our time and look at our options at the end of the season and I’ll have to do a full assessment of our organization as I always do and we’ll move forward from that point.”

Sounds eerily similar to my ears is all I’m saying…

BONUS. Benning’s future: the jury’s out

Halfway through the season, with the GM still unsigned, you know we’re going to be talking about his future every week from here on out.

So where’s the discussion at now?

Many are against it. Taj is the loudest, but he is definitely not alone.

How can any human being with a brain think Jim freakin Benning is the best they can do for GM. This shouldn’t even be a discussion. Embarrassing for the market that it’s a debate.

But hey, Benning has supporters too. At least one anyway.

seen at #Canucks practice in TO pic.twitter.com/7NYjg4Dlwu

When Canucks ownership asks Jim Benning why he should be given a new contract, all his answer has to be is “Brock Boeser and Elias Pettersson.” Benning’s made some mistakes as GM, but those two make up for most of them.

This take from Squire is a bit nuts, though. Benning makes decisions on the team every single day, and he makes hundreds of important, team altering decisions every season. I’m not going to get into all of them here – we have plenty of time to do that – but using two positive draft picks to represent four years of work?

If you’re doing that why not take the Virtanen and Juolevi picks as representatives?

Truth is, Squire’s not alone in giving Benning a ton of credit for the two picks, and re-instilling a seed of positivity in this market. Now, when you consider Vancouver’s scouting staff is made up of a group of individuals, with one of them titled “Head of Scouting” does it really make sense to give one guy all that credit?

And, this is an assessment for ownership and the president to make, but will that scouting not be able to do the same job without him there? He has been focused on the many other aspects of being a GM since he got the job in Vancouver, after all.

Brock’s Army will do anything for him. They’ll even risk their lives to see him play. Look at this member. 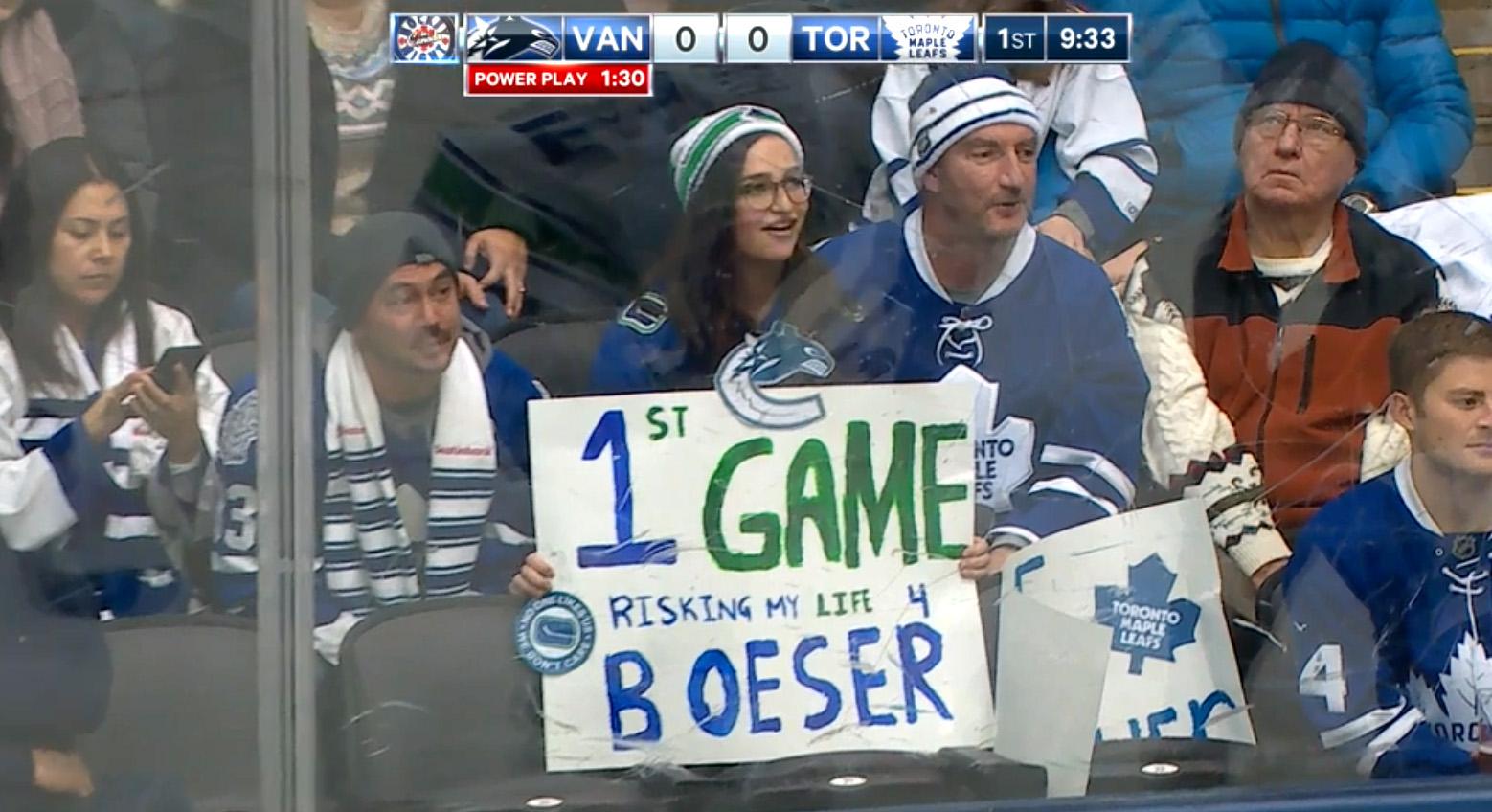 Crazy how she just took life into her own hands here. Hope she survived.

Note: Thanks to Ryan Biech for his help with some of the gifs in this post