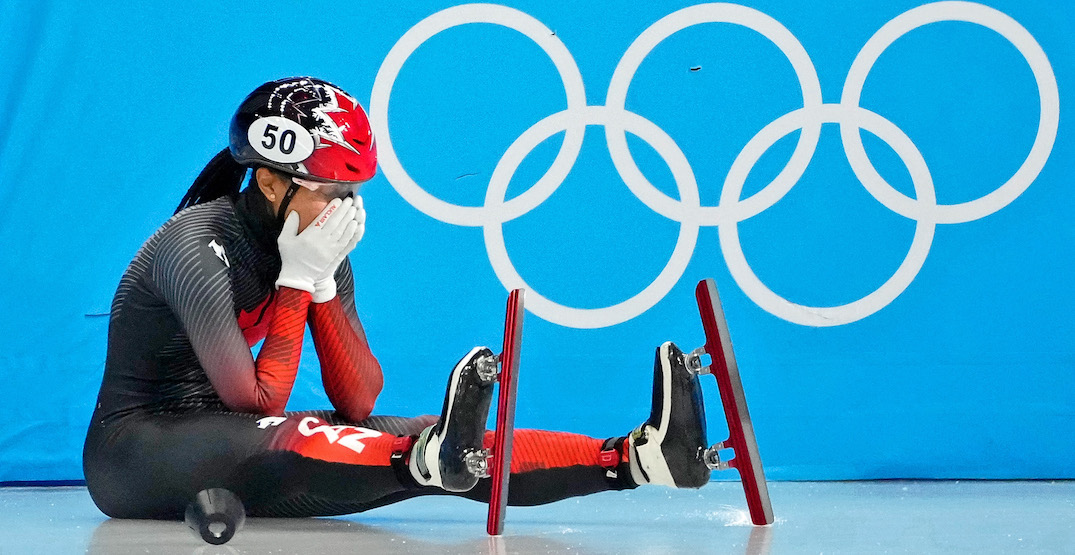 With skaters jockeying for position while travelling at high speeds, crashes are inevitable.

But one race in particular on Day 3 of the Winter Olympics in Beijing looked rather suspect.

During the quarterfinal of the women’s 500-metre race, Chinese skater Fan Kexin flicked a marker into the skates of Canadian Alyson Charles.

The act came midway through the last lap as the Chinese skater was trailing Charles, who was in second place. The top two skaters from the race were guaranteed a spot in the semifinals.

Charles fell and crashed into the boards. She looked devastated, as you can imagine.

The question is, did the Chinese skater trip her on purpose?

Was this speed skating sabotage, or merely incidental contact in a high-speed race?

Many people online think the former after watching the slow motion replay.

Canadian skater Florence Brunelle was wrongly DQ’d in the Women’s 500 metre short track semi. You can clearly see it was the hand of the Chinese skater Fan Kexin that pushed the marker that caused the spill. Bad call. #TeamCanada #Olympics pic.twitter.com/6mbwUo3pwz

Kexin didn’t end up gaining an advantage, as she tripped over the fallen Canadian.

Kim Boutin went on to win the race, with her Canadian teammate Florence Brunelle finishing second. Brunelle was disqualified by the judges though. That meant that Italian Arianna Valcepina, who was in last place prior to the crash, took second spot and qualified for the semis.

There was some justice, however, as Charles was allowed to advance given she was in second place before falling and the crash was not her fault.

Boutin went on to win the bronze medal, while Charles and Valcepina failed to advance to the final. The Chinese skater officially finished third, and didn’t advance.