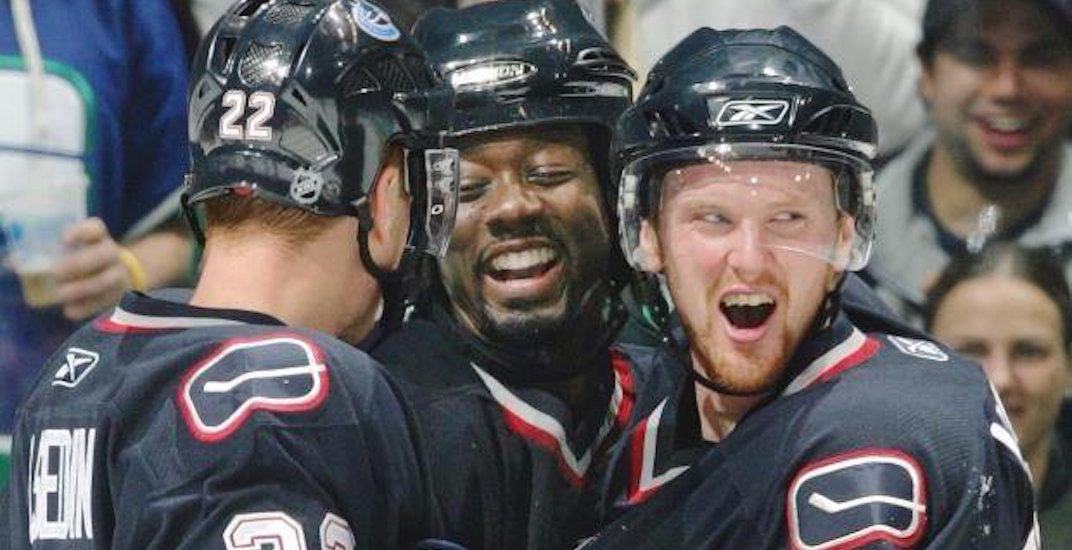 Anson Carter had a short, but successful season during his lone year with the Vancouver Canucks.

Playing on a line with Henrik and Daniel Sedin in 2005-06, Carter (ironically) scored 33 goals and 22 assists, in what was a breakout season for the twins.

But then after the season, he was gone.

In a candid interview with Hockey Central on Sportsnet 590 the FAN radio in Toronto today, Carter said the colour of his skin played a factor in why he wasn’t able to stick around longer.

Prior to signing with the Canucks, Carter was coming off a down year which saw him rack up just 28 points split between the New York Rangers, Washington Capitals, and Los Angeles Kings in 2003-04. Following the lockout-cancelled season, the Canucks signed him to a one-year deal worth $1 million in 2005 (for reference, the salary cap was $39 million in 2005-06, less than half of the current $81.5 million cap).

That was a rather large pay cut for Carter, who made $2.8 million on his previous contract, even when taking into account the 24% salary rollback on all NHL contracts with the implementation of the salary cap.

Carter told the Hockey Central hosts he “loved” his season in Vancouver, but was perplexed when his agent told him the team was more interested in signing the Sedins than him. Henrik and Daniel were coming off 75- and 71-point seasons, respectively, and were pending restricted free agents.

Carter, who fans named the “Most Exciting Player” that season, says he was offered only a “slight bump” in his $1 million salary, which he recalled being around $100,000.

“It’s funny, all the people in Vancouver ripped me for being greedy, and they don’t know, said the Toronto native. “They never really offered me a raise there.”

Having just turned 32-years-old that spring, Carter said he would have accepted a three-year deal worth $2 million per season from Vancouver. Instead, he had trouble getting a contract in unrestricted free agency, not signing a deal until September 12 — a one-year, $2.5 million deal with the Columbus Blue Jackets.

“We had great chemistry and no one was afraid to admit that,” Carter said of how he clicked with the Sedins. “And I really believe that if I was a different colour hockey player, and I’m going to say it, I really believe I would have been looked at a lot differently. I really do.”

It didn’t go well for Carter in Columbus, scoring 10 goals and 27 points in 54 games before he was traded to the Carolina Hurricanes. When things didn’t go according to plan in Carolina either, Carter found himself playing in the Swiss league the following season before retiring.