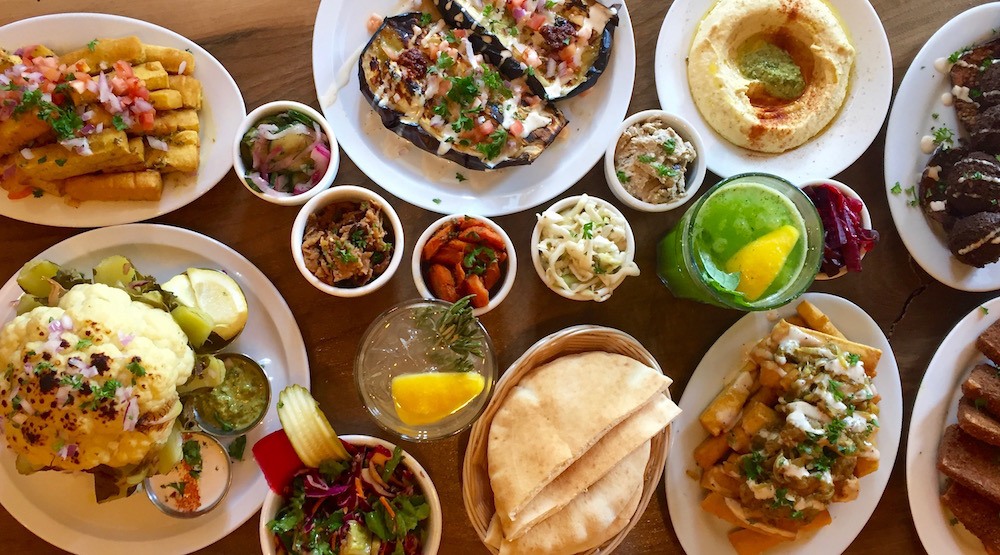 If you liked the food truck, believe us when we tell you, you are gonna be obsessed with the restaurant.

Chickpea has really nailed it with their brick and mortar space.

Located at 4298 Main Street, this spot is opening soon – no official date yet – but you can expect to see an announcement via the eatery’s social channels in the very near future.

To top off the excitement of the new space, the plant-based Mediterranean spot also just announced they are officially 100% vegan – both on the truck and in the restaurant. 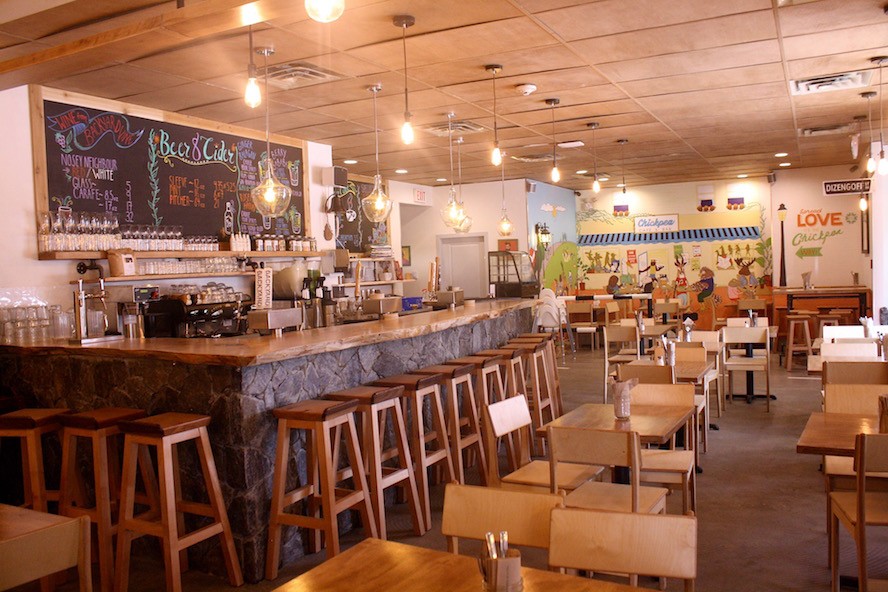 Coming in at well over 2,000 square feet, there’s a ton of room to sit in the outside-meets-inside themed room. The bar in the middle of the restaurant can sit over 12 people alone – and after checking out the beverage menu, they’ll definitely need the space come opening.

Wine on tap, craft beer and cider, ginger beer, turkish coffee, and Milano coffee are just a few of the options here, but it’s the cocktail program that’s really caught our attention. 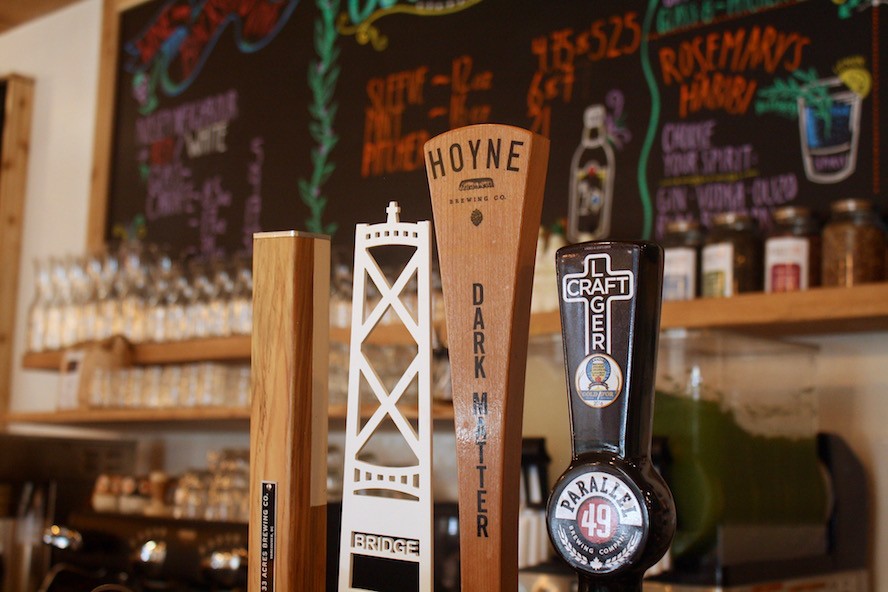 The cocktails include creations such as the Ginger Balagan, Berry Sababa, Rosemary’s Habibi, and Spiked Limonana. All of these can be crafted using the spirit of your choice (rum, vodka, gin, bourbon, and ouzo are a few options).

The best part? As long are you’re not riding solo, you can order these house creations in pitchers for $28. 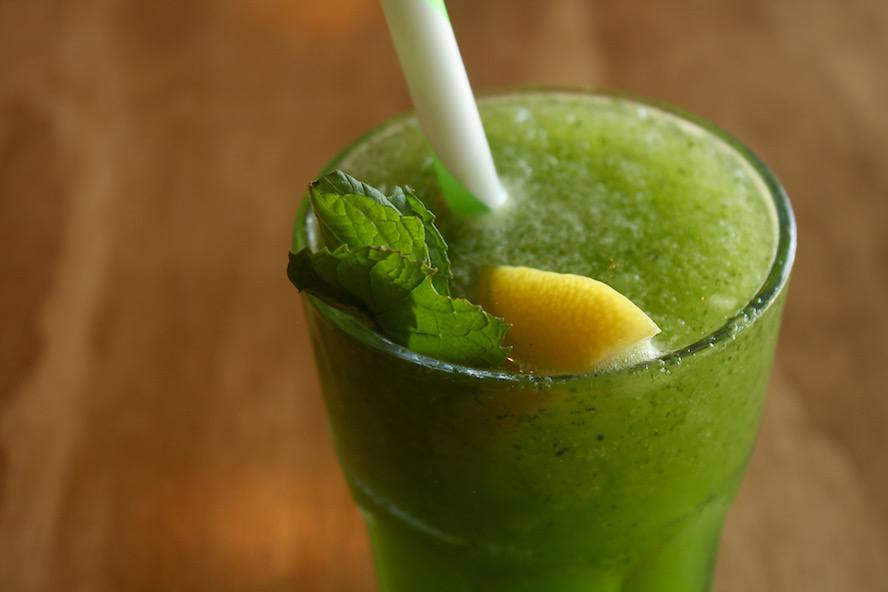 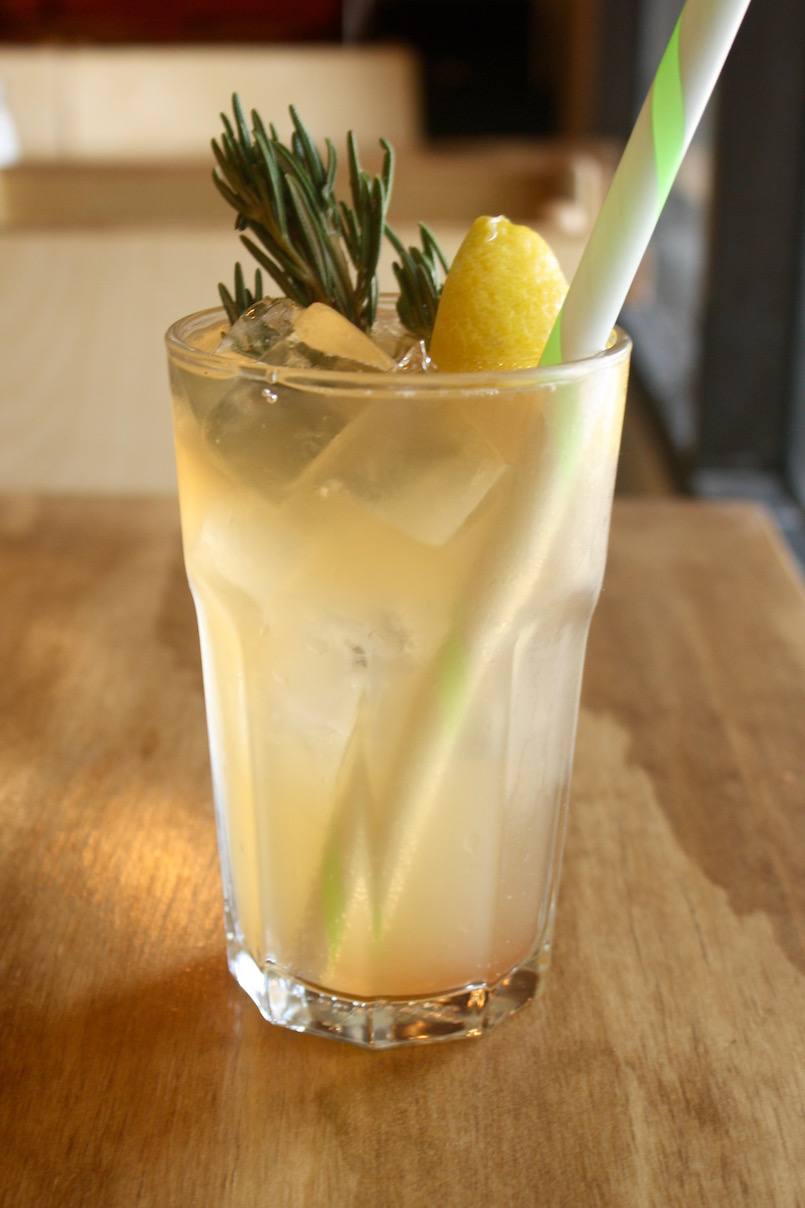 The owners of Chickpea, Rotem Tal and Itamar Shani, have made this spot a total family affair by integrating old passed-down recipes, as well as making the space incredibly kid-friendly.

Benches with toys, colourful imagery on the walls, and menus that are presented to you inside covers of popular kid’s picture books are some of the touches that will make even the hangriest customer crack a smile. 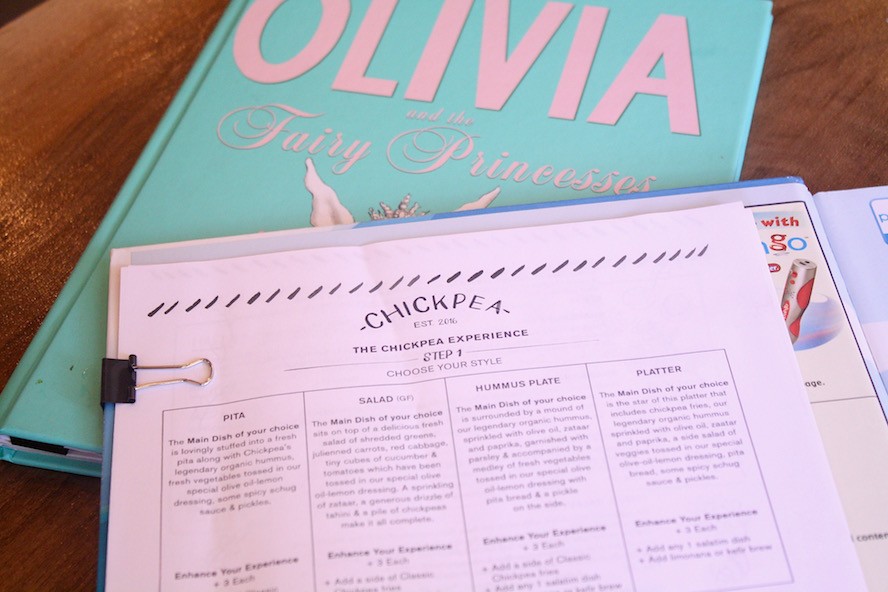 It’s easy to feel overwhelmed when you first see the menu. It’s sheets and sheets of vegan-goodness, all of them drool-worthy options, but you’ve only got one stomach, so you need to be strategic. That’s where the Share Hafla comes in.

This option is a great place to start if you want a taste of everything, and it’s a fabulous to share the Chickpea experience with a group.

For $20  person, you get one main dish of your choice, plates of hummus, Israeli salad, and pita, along with a signature array of salatim including red beet salad, matbukha, tangy Moroccan carrots, pickled veg, marinated cucumber, cabbage, hatzilim, and baba ganoush.

Chickpea will replace hummus and pita free of charge, and if you need a second helping of your main it’s just $5 with the Hafla. 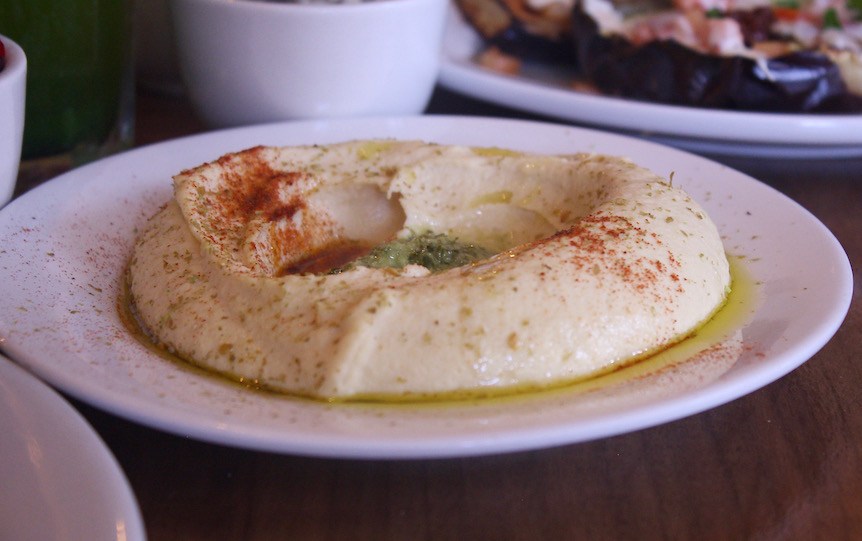 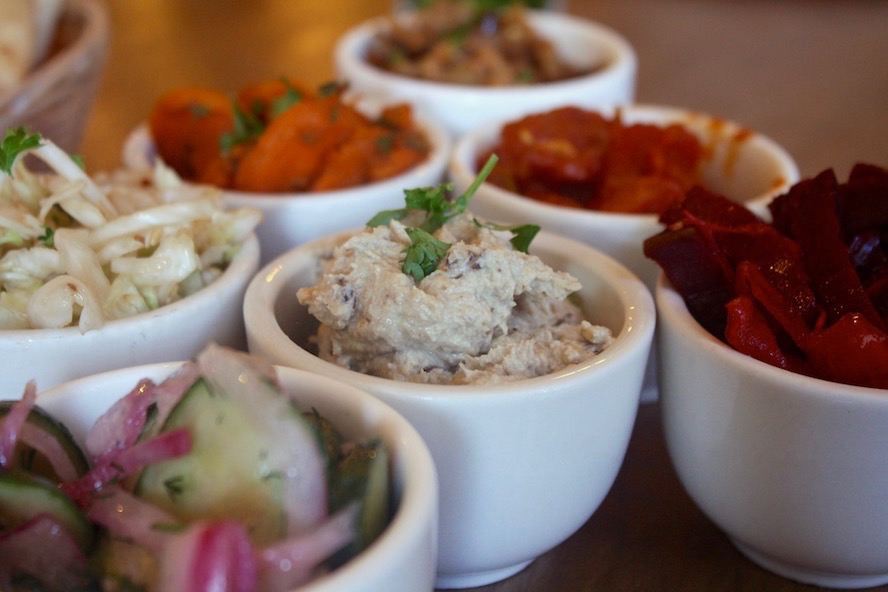 The main dishes Chickpea offers are hearty, filling, and flavourful.

Choose from a list of classic dishes with a twist, or completely new items from the kitchen of Chickpea. These dishes include offerings such as the Cauliflower of Life (a whole roasted head of the veggie), Hatzil Baladi (flame-charred eggplant), Shnitzelonim (crispy battered smoked tofu), Shwarma (thinly-slice marinated tempeh), and Falafel to name a few. 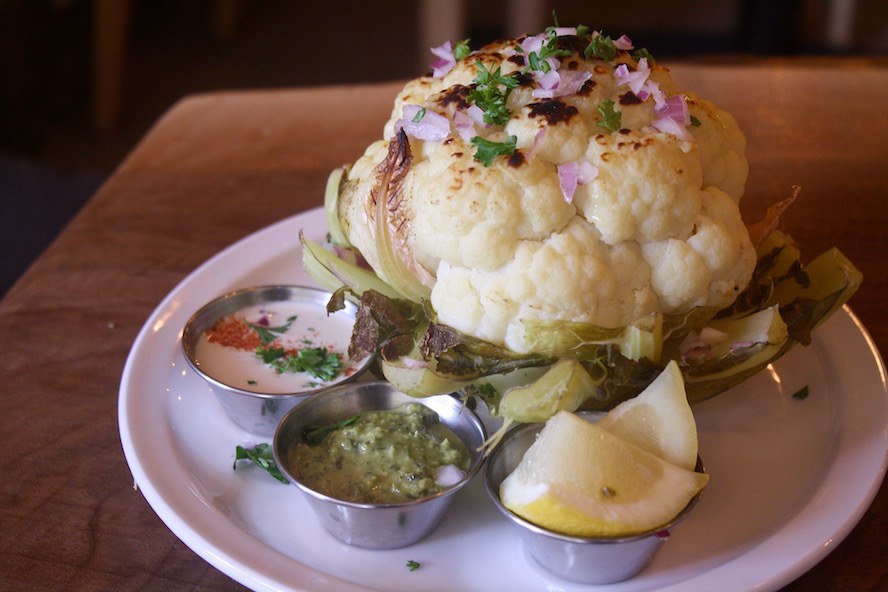 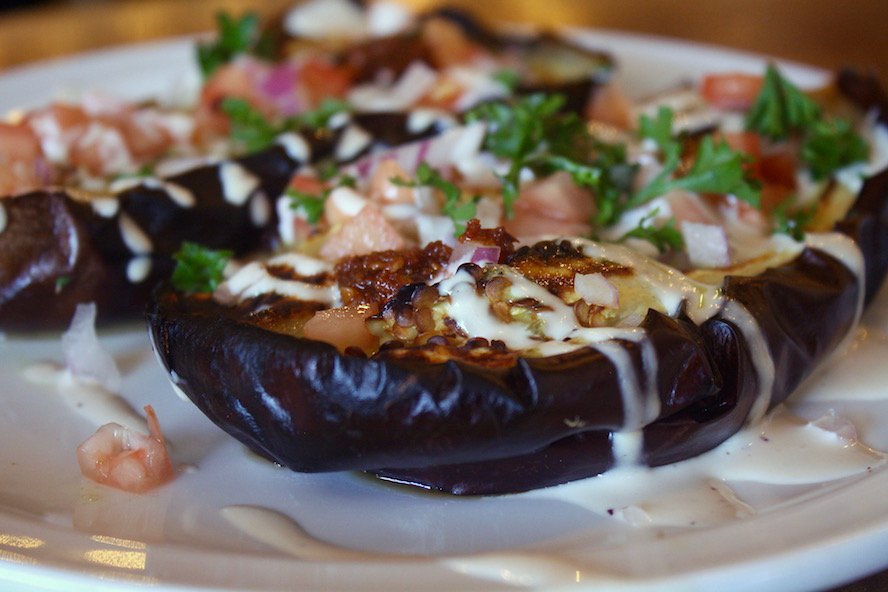 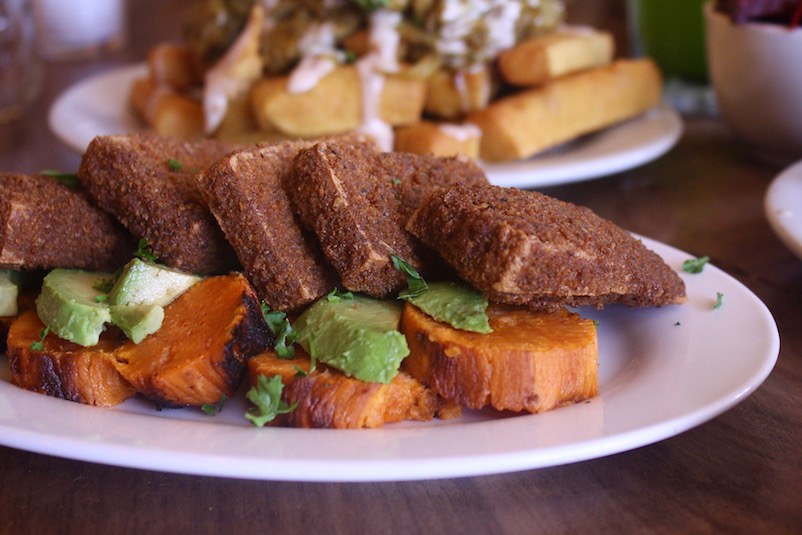 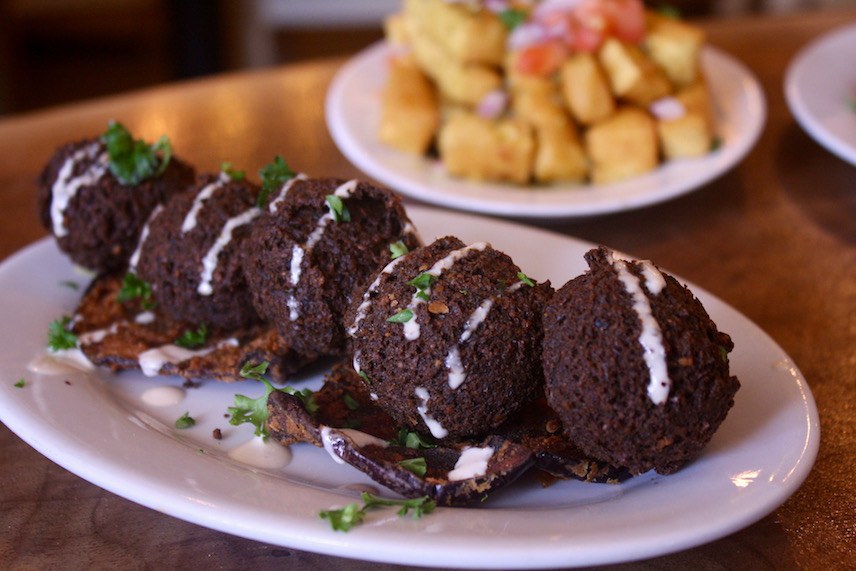 But how could you dine at Chickpea without opting for an order of the epic fries that made the truck a massive hit in Vancouver? Choose from Classic, Fresh , Shawarma , Kasum, and Shakshuka Fries. 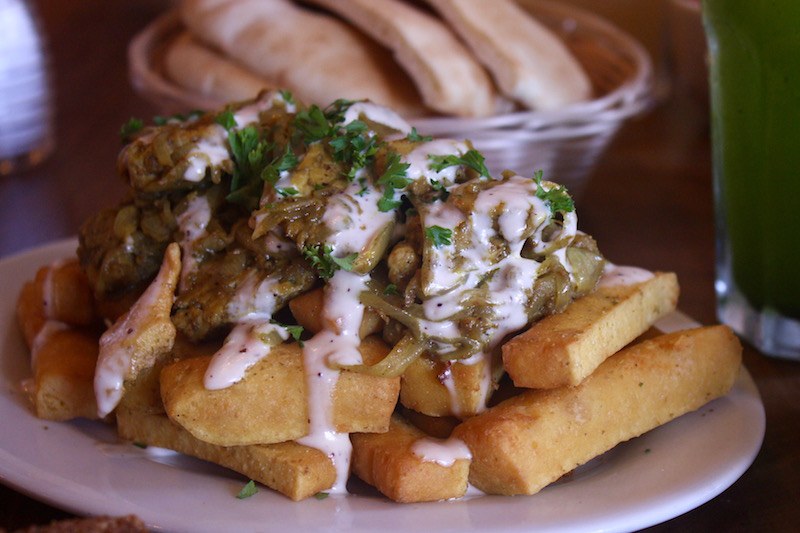 Pro tip – Chickpea also offers over five different varieties of tahini, that means you can mix and match to find the perfect side for your fries, which we highly recommend. 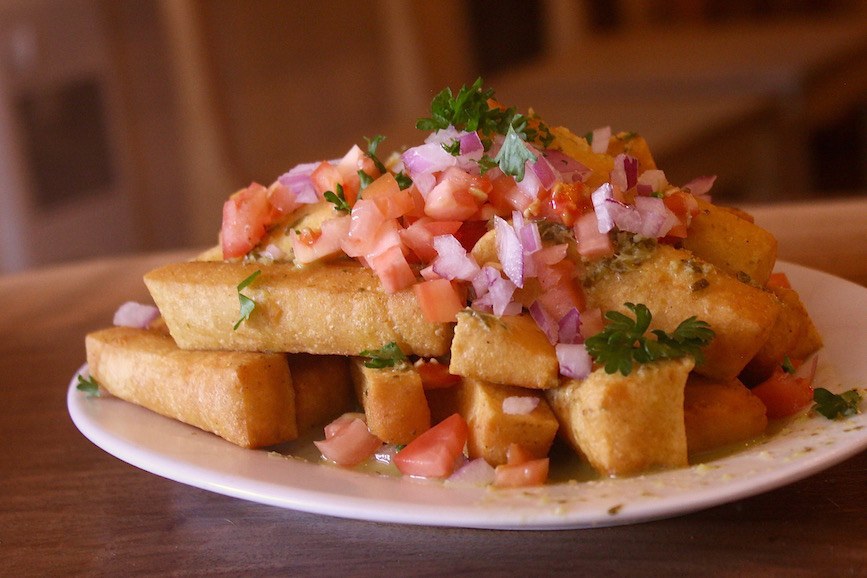 Piping hot and perfectly crispy, a standout on the menu has to be the Zucchini and Dill fritters, Chickpeas’ take on traditional latkes. This is a must-order during a meal here. 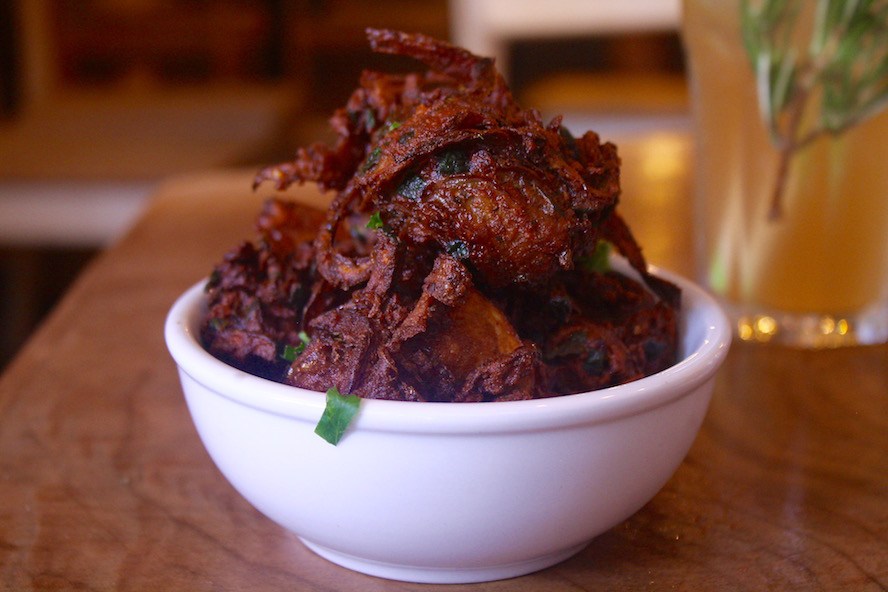 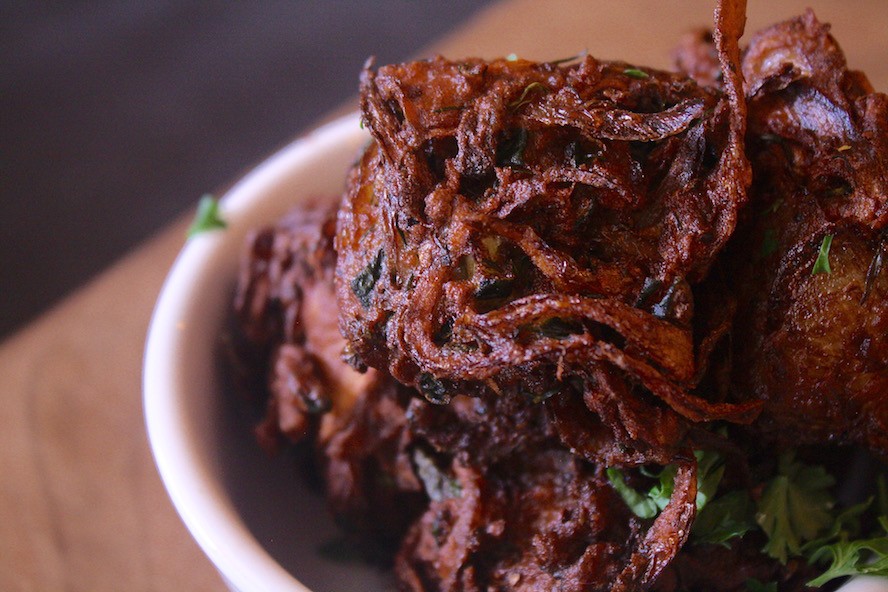 Aside from this insane spread of options for lunch and dinner, Chickpea will soon be offering an All Day Breakfast menu and a brunch service to come.

Dessert too, doesn’t disappoint. With family recipes such as Safta’s Secret Carrot Cake (AKA Shani’s mother-in-law) and classic Baklava paired with Say Hello Sweets’ vegan ice cream, it’s a difficult course to pass up, no matter how full you may be. 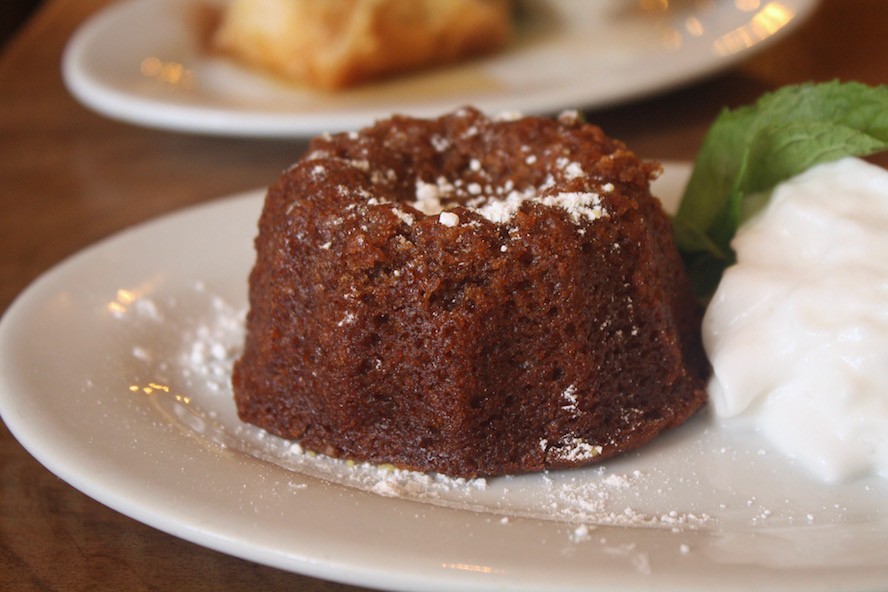 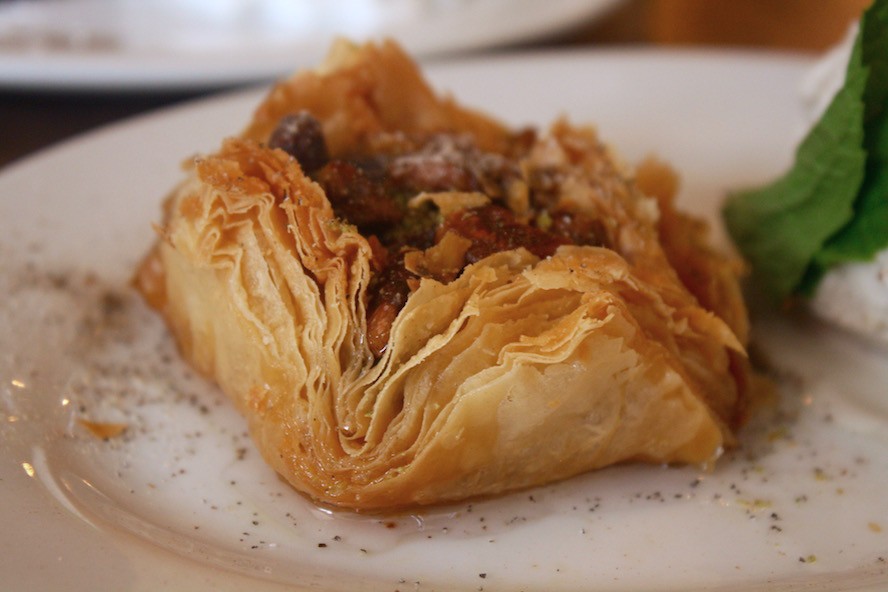 So believe us when we say, when you come (and you will come) – arrive hungry, and don’t plan a slew of activities afterwards – the vegan food coma is real.

Chickpea Restaurant has not yet announced official hours. 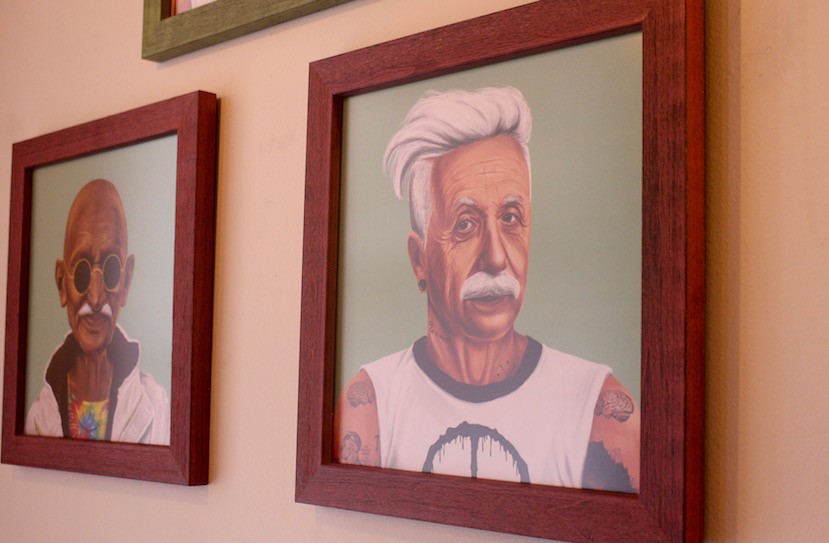