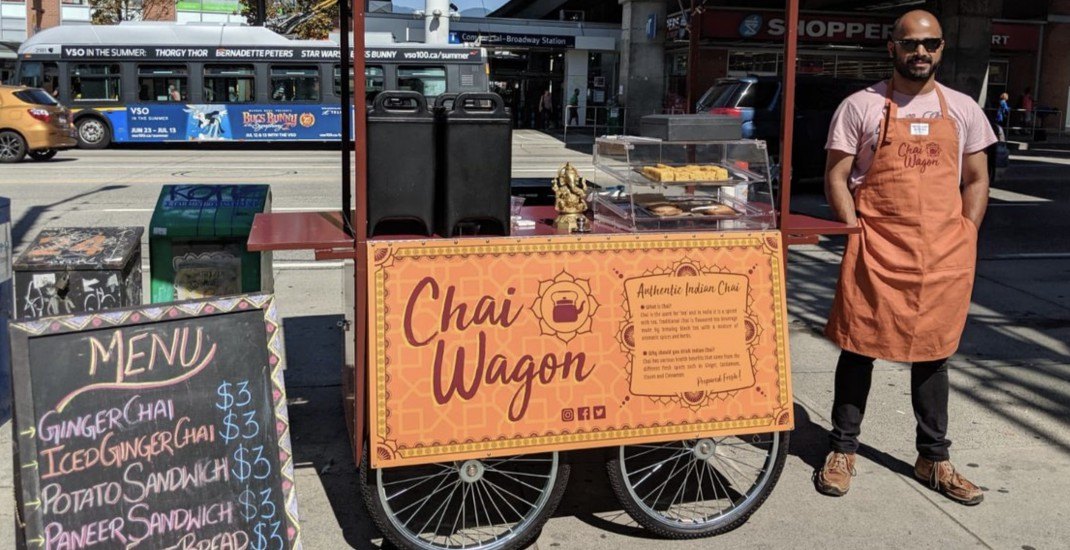 For little nearly a month, Shivam Jaiswal has been operating the Chai Wagon at Commercial Broadway Station, serving up warm cups of the traditional Indian tea.

His passion for the tea comes from his home state of Haryana, India, where drinking multiple cups of chai is part of nearly everyone’s daily routine.

In fact, that’s the case in much of India, where chai (also called cha in various parts of the country) can be considered the lifeblood of the nation.

Unlike like North America, where coffee chains reign supreme, India is all about its chai.

“I don’t drink coffee and when I was growing up too, I never had coffee because that was never in the culture,” Jaiswal told Daily Hive.

When Jaiswal moved to Vancouver from Winnipeg two years ago, he was hoping to find an authentic cup of chai.

With Vancouver’s diverse, multicultural background, he was sure traditional chai would be sold in at least a few cafes or coffee shops. But he was left disappointed.

“When I moved here, I was in search of a good cup of chai. I went to all these cafes because those were the most accessible ones to try a cup of chai and then I tried almost everywhere in Vancouver [..] and to be honest I couldn’t find a good cup of chai,” he said.

“There’s this perception of chai being defined by Starbucks’ chai [tea latte]. That’s what made me really sad.” 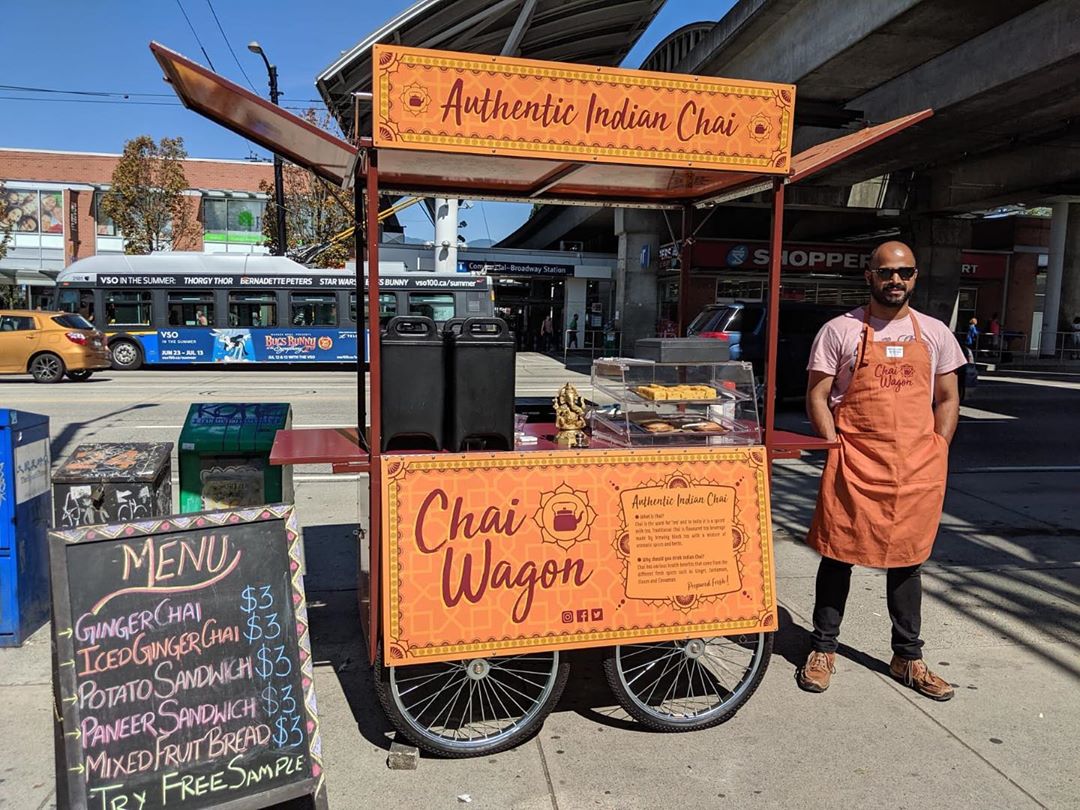 That’s when Jaiswal had the idea to start his own chai wagon in Vancouver.

A year ago, Jaiswal began testing his concept at a Granville Island farmer’s market with the help from Groundswell, a community-based organization that assists local entrepreneurs with building their businesses.

Jaiswal’s test runs were successful and he officially opened the Chai Wagon in late August 2019.

Currently, Jaiswal operates the wagon from Monday to Saturday outside of Commercial Broadway SkyTrain Station and makes the chai fresh on site. He also serves snacks – fruitcake and spiced potato and paneer sandwiches.

Jaiswal sets up the Chai Wagon at 7 am and waits for the morning rush to come through. Things pick up again in the afternoon when commuters start heading home. 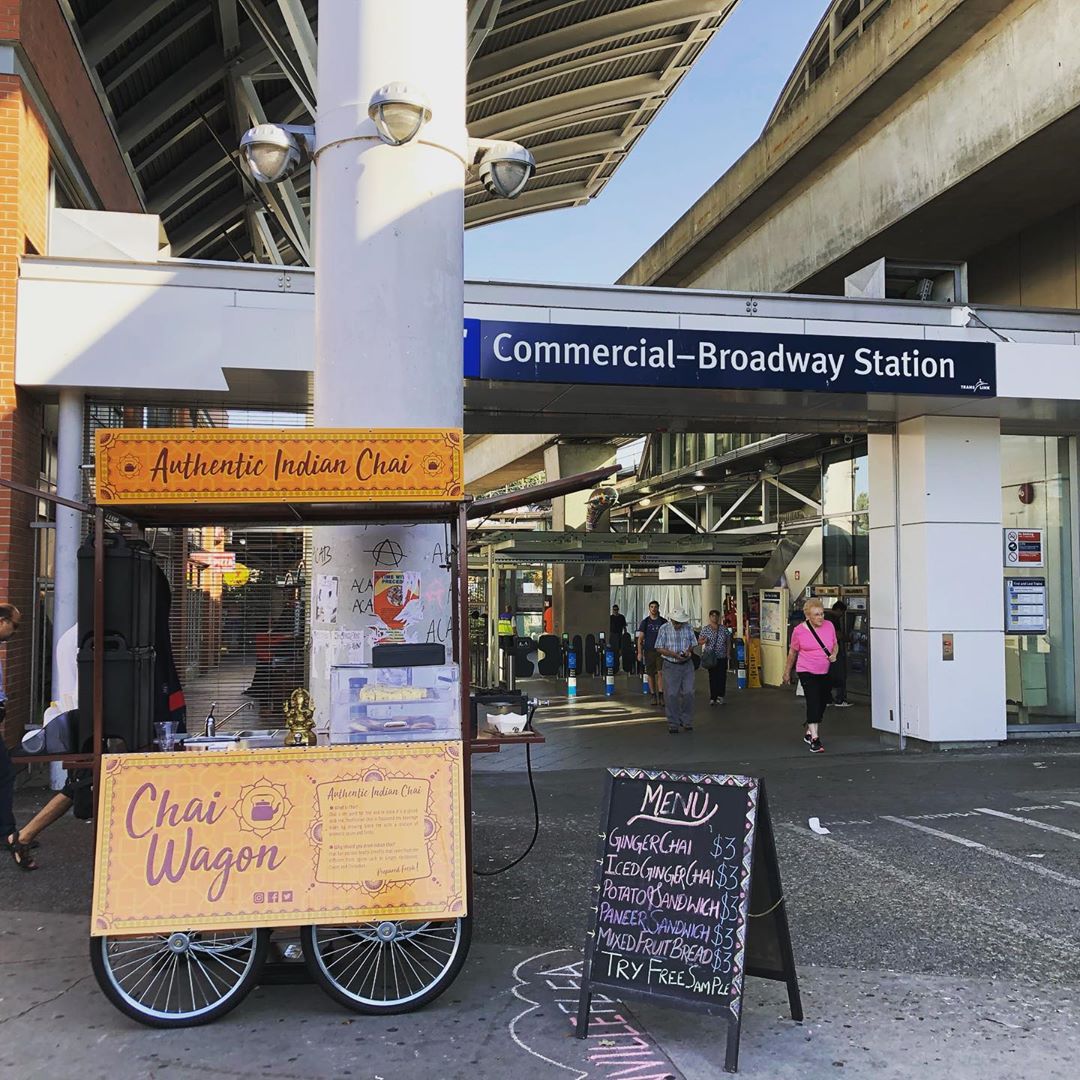 The recipe for traditional Indian chai is quite simple.

Jaiswal adds freshly grated ginger, crushed cardamom pods, loose black tea, and a hint of sugar to a pot of water, brings it to a boil, and then adds milk.

“There’s this huge misconception about chai that it’s a complex drink. I find that it’s the easiest process,” he said.

Within a few weeks of being in operation, Jaiswal says he has about a dozen repeat customers coming through to order a cup of chai every day. His goal is to build a relationship with each and every one of them, over a cup of chai.

In India, drinking a cup of chai with a colleague, friend, or family member is a way to keep those human connections alive.

“India is such a diverse country. Like every 60 kilometres you travel, the dialect is different, the food is different, but chai is something that unites 1.4 billion people. Because you’ll find chai everywhere,” he says.

“Canada is the most amazing country… but the one thing that I am noticing it misses, is the people are hesitant to talk to strangers.”

For Jaiswal, building relationships is important, and that’s what he has been able to do with the Chai Wagon.

“Even my non-Indian customers who have travelled to India, they come up and they have this conversation with me and that’s the most satisfying part of my job. When, you know, I’m trying to know my customers and I am having a conversation.”

Find the Chai Wagon outside the Commercial Broadway SkyTrain Station Monday to Saturday from 7 am to 2 pm.