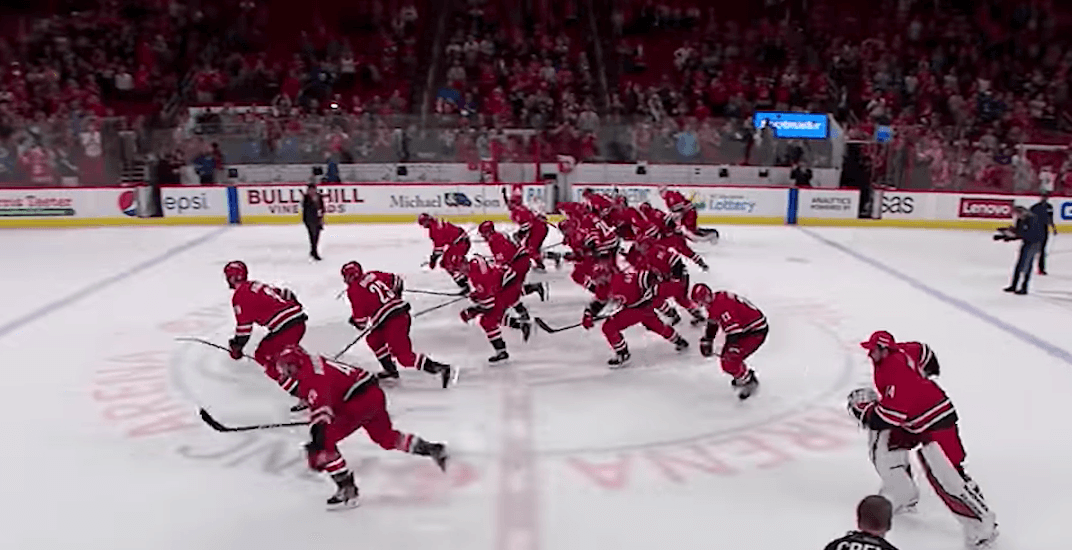 After scoring a 5-3 win over the Vancouver Canucks on Tuesday, the Carolina Hurricanes were sure having lots of it.

The Canucks exited the ice immediately following the loss, as the obnoxiously loud goal horn sounded in Raleigh. The Hurricanes stayed on the ice to congratulate their goaltender, Curtis McElhinney, as is tradition in hockey.

After that, they did something different.

The Hurricanes showed off their new home ice victory celebration, and it involves many random components.

Lining up on the blue line, former Flames winger Micheal Ferland led the team in a Viking clap. Hurricanes players then raced down the ice together, as if the coach was bag-skating them, before leaping into the end glass.

Yes, this is their new tradition:

“We thought of something we could do after the game to have a little bit more fun,” new Hurricanes captain Justin Williams told ESPN.

“We want to have fun when we win,” said new Canes head coach and former captain Rod Brind’Amour. “The game should be fun. We want the players to enjoy winning and the fans to enjoy being here.”

If the NHL has been guilty of one thing, it’s avoiding fun at all costs. “The code,” is often in opposition to showmanship, so it’s a breath of fresh air that teams like the Hurricanes are blazing a new path.

Old school hockey men like Don Cherry have been praising players for subdued celebrations for years.

“I’m not sure coaches [back when I played] would have allowed it, but we’re living in a different time,” Brind’Amour told Sportsnet, adding that players used to go out and “have a good time.”

The Hurricanes have used their new celebration just twice, debuting it after their first home win against the New York Rangers on Sunday.

The Canucks actually have a recent history with the Viking clap, getting ‘Johnny Canuck’ to lead the crowd on the big screen at the home opener. It has a little more power when the players on the ice are leading it though.

Attendance in Carolina is always a struggle and just 11,932 showed up at PNC Arena on Tuesday. The new tradition, along with scoring goals (13 in the last two games) and winning hockey games (3-0-1 record to start the season), should help fill seats.