The Canucks will do better than last year’s performance of 69 points?

Declaring the Canucks will be better this year is about as bold as saying the number of bike lanes in Vancouver is excessive. That’s because like Gary Bettman’s popularity, the team’s results can’t possibly go down any further.

We have reasons to make such audacious claims though. And some actual reasons to be optimistic.

While scoring and coaching are always more popular to talk about, defence is still the most important skater position. With that in mind, we look at the Canucks’ defensive depth chart at the start of this season versus that of last season. 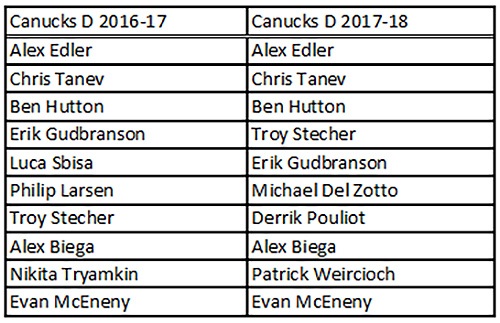 If you’re like me, the names Philip Larsen and Luca Sbisa will jump off the page when you look at these lists.

Those two played a lot of minutes in the six-man defensive rotation, and they were about as solid as Cam Newton’s understanding of what it takes to understand a route.

You can see here that Sbisa and Larsen were Vancouver’s two worst defencemen in terms of shot-attempt differential.

You’ll also probably notice Tanev was the third-worst on this list.

Yes, Sbisa was so bad that he even managed to tank Vancouver’s best defenceman’s numbers.

Removing those two from the lineup, moving Stecher up to a top-four role, and installing Erik Gudbranson and Michael Del Zotto as solid third-pairing guys will make the defence more reliable.

While there have been significant changes to the roster, the most impactful off-season change will be coaching.

A couple months into the season, this gif was becoming a staple in our post-game SixPacks:

Wasted late game power plays, missed chances at using offensive-zone faceoffs to Vancouver’s advantage, excessive use of defensive players late in games – these were just some of the costly deployment decisions costing the team valuable points.

By the end of the season it’s not a stretch to think coaching cost the Canucks 5-10 wins or over 10 points in the standings.

With the Sedins not having much time left in the NHL, fans may have been more upset about the wasting of what few seasons they have left.

And when TSN’s Bob McKenzie posed the following question to Jim Benning in September: “Fill in the blank – the Canucks will be successful this season if…?”

Benning answered: “We have four scoring lines that can contribute to the offence.”

Clearly the team went after that depth scoring coming into this year.

One problem: depth can only take you so far.

In the article, Luszczyszyn uses a statistical model to assign “star points” to all players in the NHL, and looking over the past seasons, he determined that a team needs 14 of his star points to be a Cup contender.

The important thing to note is his “star points” are assigned based on recent, not historical play. So while the Sedins are legitimate NHL superstars, they no longer received star points based on their past few NHL seasons.

In fact, the Canucks roster had zero star points on it last season.

It’s hard to say if that will change this year, but we do know Bo Horvat will improve and Brock Boeser has definite star potential. The change these two bring to the top-six – who play the most minutes in every game – plus the improved power play should certainly add goals, and hopefully wins for this team.

Looking at the success rates of the penalty kill and power play last year, it’s no surprise to see that Vancouver was at the bottom of the league for both. 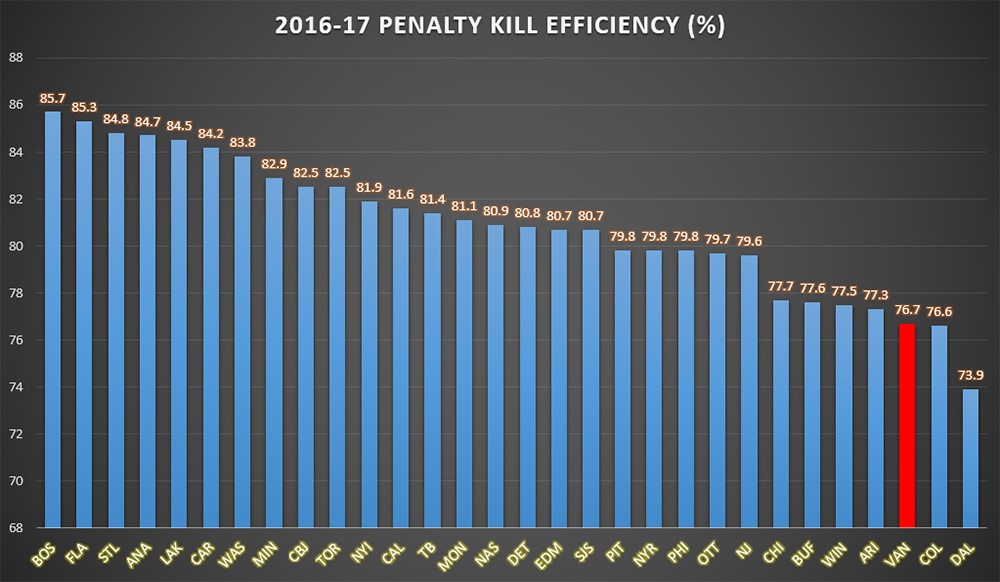 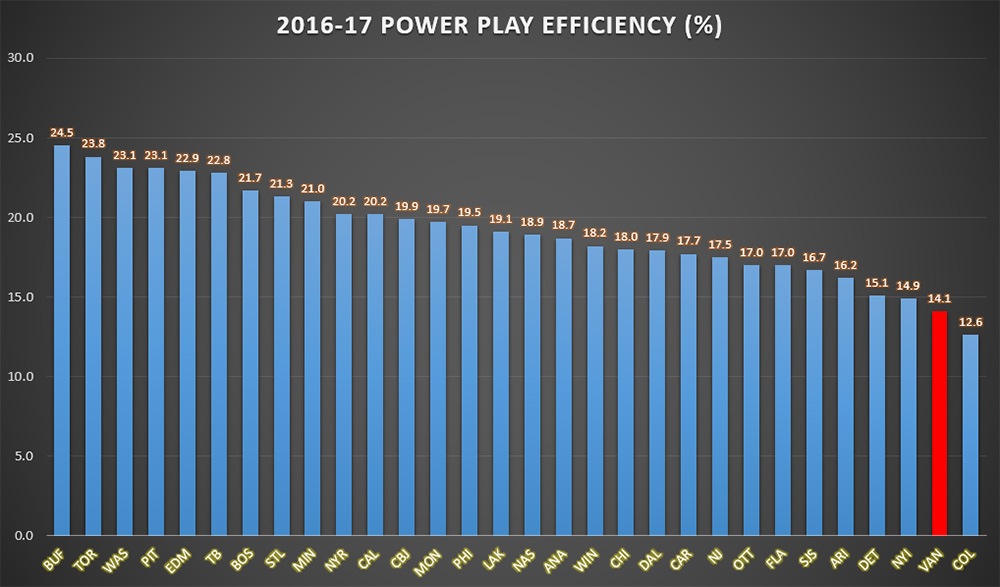 If you look at the underlying data, it’s a bit surprising to see the penalty kill wasn’t as porous as the results showed. 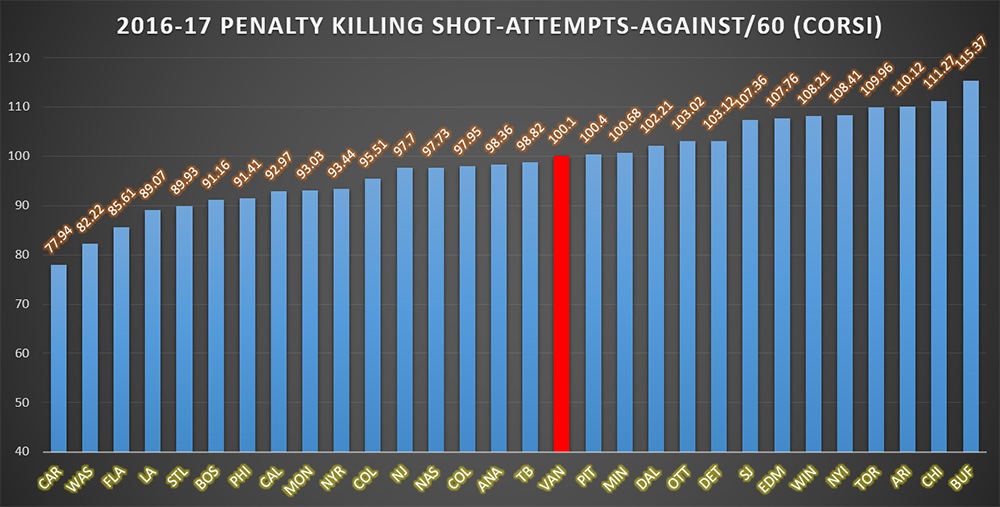 That just means they gave up more goals a man down than their quality of play should’ve allowed. This could have been caused by mistakes, goaltending, or open passing lanes that cause shots to be more difficult to save.

The power play on the other hand – it was terrible by all measures.

All this to say both special teams should improve.

With the new, more solid defensive core that is coached to move the puck out faster, the PK will be more effective.

And the power play – like the Canucks in the standings, it can’t fall any further.

While the new depth forwards may not move the needle much at five-on-five, Vanek, Burmistrov, and Gagner should help the power play significantly. So will the new coaching staff, including assistant coach and power play specialist Newell Brown, who won’t hesitate to change things up if they’re not working (instead of riding it at 12 percent…).

One more reason for optimism: even if none of this works and Vancouver’s results are no better than they were last season, they will be more entertaining to watch.

Travis Green on Sportsnet 650 “Speed is a big part of what I want in my team.” #Canucks

Travis Green’s system allows quick transitioning of the puck and activation of the defence at the offensive end.

Brock Boeser and Jake Virtanen will play a lot, and we’ll likely see Nikolay Goldobin and maybe Jordan Subban and Thatcher Demko with the team if injuries strike.

Hey, if we can’t have playoff hockey in Vancouver, at least we’ll have more youth and speed to enjoy watching. Those should carry us to the highlights of a Canucks season these days: the trade deadline, draft lottery, and draft day.

And there you have it – it is possible to be optimistic about the Canucks.