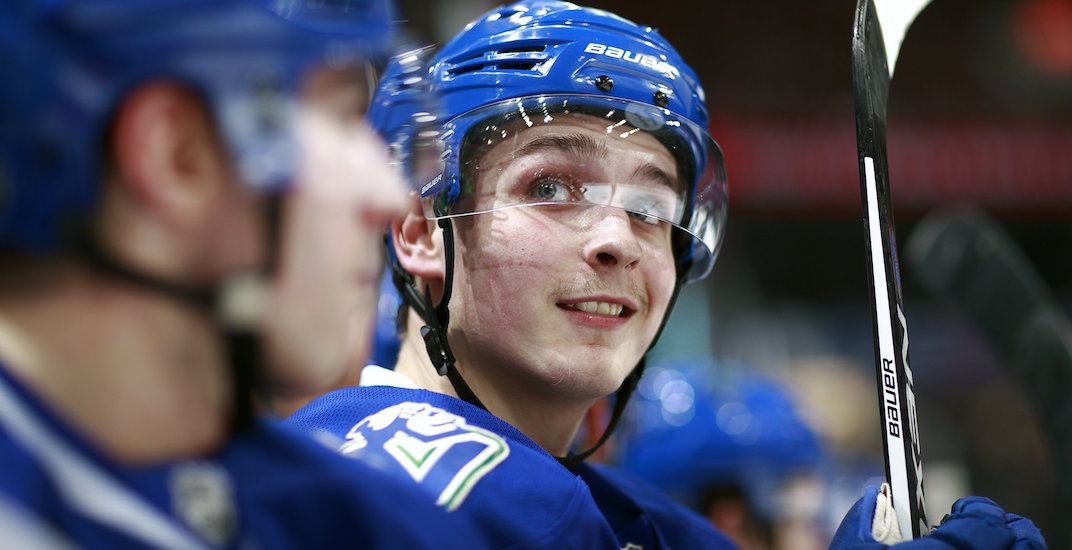 Playing in a strong hockey market has its share of ups and downs. If you’re lucky enough, you can connect with the fans, or make a memorable high stakes play, or simply perform at a high enough level that people are legally required to adore you.

People will chant your name at the laundromat, name their pets after you (Pavel Purr-ey), and offer you their spot in line at Tim Hortons. It’s a pretty good way of life.

Or you can make one mistake, have a stretch of bad hockey, or have a last name that sounds eerily similar to “pizza”, and the people will turn on you. Your statues get torn down, fans write haikus about your inability to play hockey, and some people name their fantasy hockey teams after you in a disparaging way. RIP “Semin Stains”, circa 2014.

Virtanen arrived in the Canucks market as the sixth overall pick in the 2014 NHL Draft. This was around the time the competitive flames of the 2011 core had been extinguished in Vancouver, and Jake was seen as the start of the next group to lead the Canucks in their eternal quest for the Stanley Cup. At sixth overall, it was the highest draft pick the Canucks had had since they selected the Sedin twins at No. 2 and 3 in the infamous 1999 draft. Needless to say, that added a lot of extra hype and speculation to whomever the Canucks were going to take.

Virtanen was also the first draft pick made by the super scout himself, new-to-the-job Jim Benning. Benning was sold to the market as the ultimate scout, a guy who would finally rebuild the Canucks prospect depth, a depth that many people felt was crippled under the Gillis regime. This meant there were a lot of eyes on this pick, as it would be one of Benning’s first big stamps on the team, setting the future course for the franchise.

And amongst those eyes were a lot of data driven eyes. After all, Vancouver is the birthplace of the ‘Computer Boys’, gentlemen who now have their hands in the Florida and Toronto hockey organizations. This market is generally very ‘woke’ when it comes to analytics, and has a very strong connection to them.

This is why a lot of people in Vancouver had approached the 2014 draft with some trepidation.

You have to remember, the Canucks were still trying to move on from the shadow of previous Canucks GM Mike Gillis at this point. Gillis, for all his success, was seen by some as arrogant at best, and dismissive at worst, when dealing with the media and the fans. It was fine when the team was winning, but after several years of failure, the act was starting to wear thin in Vancouver. I am sure we can all fondly remember Gillis fighting on air with Blake Price to the bitter end.

Add in the disaster that was John Tortorella (he was like a manic rebound guy your mom dates a month after her divorce with your dad is finalized, who tries too hard to be your best friend but was stealing money from your mom the entire time), and the Canucks seemed very intent upon making the Canucks feel approachable again.

Bring in the golden boy in Trevor Linden, get a real salt of the earth guy like Jim Benning, and all of a sudden, you’re the good ol’ Canucks again. Just one of the family. No arrogance here, no sir, no ma’am, we just want to watch a game of hockey with you and the family. Hey, did you hear about the local kid we just drafted? Remember Jake Virtanen? Didn’t he used to mow your lawn as a kid? Gosh your dog sure is cute.

Picking the local kid from Abbotsford fit right into that new culture. The guy who could snipe corners, skate fast, and crunch some bodies. The kind of local talent that became almost mythical during Lucic’s peak with the Bruins. “Why can’t the Canucks ever see the talent in their own back yard??” was a common refrain in Vancouver.

And to be fair, there were some people who loved the idea of a Jake Virtanen. Because on paper, yes, who wouldn’t want a kid who can skate like the wind, has a big frame, can score goals top cheese and can kill people with bodychecks? Raffi Torres played a handful of games like that in 2011 and he was the stuff of legends for that run. Imagine a young kid doing that year in and year out? That was a huge draw to many people, especially people who viewed the Canucks as a soft team.

The problem was the Computer Boys raised some issues about drafting Virtanen at the six spot. Going into the draft there was a lot written about how Virtanen’s goal totals (45 goals in 2013-14 with the Calgary Hitmen) and lack of assists (26 assists in 2013-14) was a possible red flag. No one denied he had talent, but the argument was there was better talent to be had at the No. 6 spot. We all know the names on the lips of Computer Boys everywhere, they were of course William Nylander and Nikolaj Ehlers (taken eighth and ninth by the Leafs and Jets respectively).

As Canucks Army’s Rhys Jessop argued at the time: “Drafting Jake Virtanen isn’t just about getting Jake Virtanen in your organization. It’s also about passing up on the opportunity to draft some other guy who is the best available alternative to Virtanen.”

Fast forward to this past off-season, and Rhys’ words rang clear through the air when looking at the 2016-17 hockey seasons point totals:

Jake Virtanen had fallen from “can soon can he play on the top line” to “can he be an elite third liner” to “will he even make the NHL”.

Compared to the two names attached to his name forever from the 2014 draft, it generated a lot of criticism. Criticism at the Canucks for drafting him, criticism at Virtanen for not taking being a pro seriously, criticism at everything to do with the situation, some of it valid, some of it not.

The end result was that Jake Virtanen had been written off before this season began.

Struggling to produce in the AHL is never a good omen for an aspiring NHL player, and it seemed like the young man from Abbotsford might end up in the same group as Nathan Smith, Cody Hodgson, and countless other failed first rounders from the Canucks past.

Except a funny thing happened this year.

Virtanen came to training camp this year ready to play. And he had himself a hell of a camp to the point where people even pondered if he deserved an NHL spot over Prince Charming himself, Brock Boeser.

Virtanen worked his way into getting a spot on the opening roster, primed to show the NHL what he can do. It seemed like his year with Travis Green had paid off as Jake looked better on the ice than he had in any of his previous camps.

As always, there is caution to be handed out. We’ve seen Steve Kariya, Fedor Fedorov, and Sergei Shirokov have strong preseasons, only to flame out in the regular season. No one is suggesting Jake Virtanen is on the cusp of a 60-point season. But Virtanen has shown signs of being an NHL player.

And here’s the thing about Vancouver. Sure, the fans and media can be critical; sometimes to the point where it borders on being mean spirited. But underneath all of it, people genuinely want to see players succeed in this market.

Virtanen took a lot of lumps from people over the last few seasons, and the line of ‘fair criticism’ blurred as everyone piled on. But as we’ve seen in the past, being a scapegoat in Vancouver puts you on a weird fulcrum that sometimes tips over into support.

We saw some of that with Luca Sbisa, who by the end of his time in Vancouver was regarded much more fondly than his first season here. We saw it with Keith Ballard who struggled to stay in the lineup in Vancouver, was a head-case on the ice by the time the 2011 Cup Final rolled around, but ended his time in Vancouver as a mini fan favourite.

There is something to be said for players who fight through the white noise of a hockey market and continue to work hard to improve and adapt their game that gets you a lot of support from the fans.

Which is where Virtanen finds himself right now. He stands at the brink of a season where he can become a fan favourite. Everyone loves a comeback story.

People want the local kid to succeed and love seeing a guy pick himself up off the mat and prove people wrong. If Jake Virtanen plays a physical game, scores some goals, and continues to improve, he will be beloved in this town. With the Sedins’ careers almost over, this team will need new personalities to fill the void, and Virtanen could be arm in arm with the Boesers and Horvats of the new core.

Or it could be another case of the illusion of preseason hockey, whispering sweet nothings in your ear, only to disappear quicker than Brian Savage after October.

So while picking Jake Virtanen at sixth overall might never be viewed favourably, 2017 might be the start of the redemption of a local kid from Abbotsford. You know Jake, right? Didn’t he used to mow your lawn?