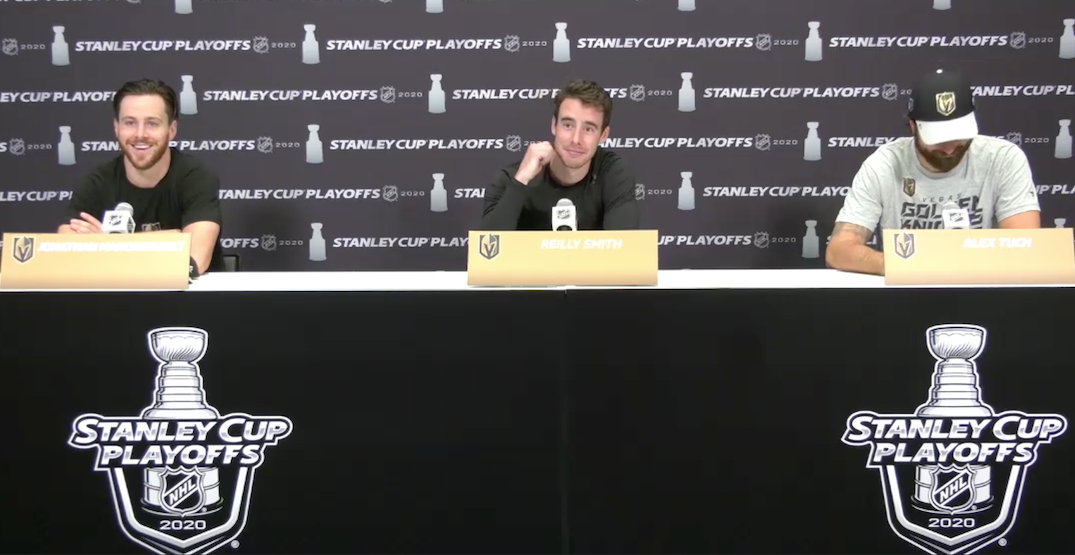 The term “laugher” is often used to describe a blowout in hockey, but it’s rare to see a team literally laughing at their opponent. But that’s what happened in the Vancouver Canucks’ 5-0 loss in Game 1 to the Vegas Golden Knights on Sunday.

In a game where nothing went right during the run of play, the sideshow that was Antoine Roussel versus the Golden Knights also blew up in the Canucks’ faces.

It began in warmup, when Roussel was seen talking to Golden Knights goaltender Robin Lehner. That brought Vegas rough guy Ryan Reaves into the series right away, which was something he appeared to relish.

Antoine "i will cause problems on purpose" Roussel pic.twitter.com/LiHFze95zl

Reaves later made chicken noises at Roussel while having a good laugh at the Canucks forward’s expense.

Ryan Reaves made chicken noises at Antoine Roussel and the on-ice mics picked it up 😂 pic.twitter.com/danm3ut5FF

While you have to appreciate Roussel’s win-at-all-costs mentality, the wisdom in trying to agitate the entire Knights roster seemed misguided. Vancouver’s best chance at beating Vegas in Game 1 was to surprise them with their speed, skill, and will to win. That’s what they did against the St. Louis Blues.

Trying to get in the head of their goalie was never going to intimidate a team that’s bigger, meaner, and, let’s be honest, better than this young Canucks team.

An upset was and is possible in this series, but not like that.

“He’s running around out there. I don’t think he’s really distracting anyone but himself,” said Smith, who cracked a smile at the mere mention of Roussel’s name by a reporter. “I don’t think he changed the game at all tonight. If that’s the way he wants to play the remainder of the series, I think he just hurts his own team.”

“I don’t think anyone was bothered about it,” added Marchessault. “That’s why we pay Reavo the big bucks! He’s going to take care of him and we’ll do our thing.”

Marchessault’s answer had the other two players at the podium, Smith and Alex Tuch, bursting out laughing.

Marchessault: That's why we pay Reavo the big bucks. pic.twitter.com/0611jlz967

Let’s be clear here, there were many reasons why the Canucks lost Game 1, and Roussel’s act was well down the list. But it didn’t help.

For Game 2 on Tuesday, the Canucks will need to make adjustments, and hopefully they use the Golden Knights’ mockery of their teammate as motivation.

Roussel is given a 10min misconduct for… hugging? 🤗🤣#NHLonSN pic.twitter.com/2RGEFuqp5I

Ryan Reaves smiles and waves at Roussel in the box 🤣#VegasBorn pic.twitter.com/Q2M431yZT3

When #Canucks Antoine Roussel exited the penalty box, Ryan Reaves and the #VegasBorn bench gave him a great applause. 🤣 pic.twitter.com/mT1CKaJ88u

"im straight up not having a good time " – Roussel pic.twitter.com/kDNggBC77B