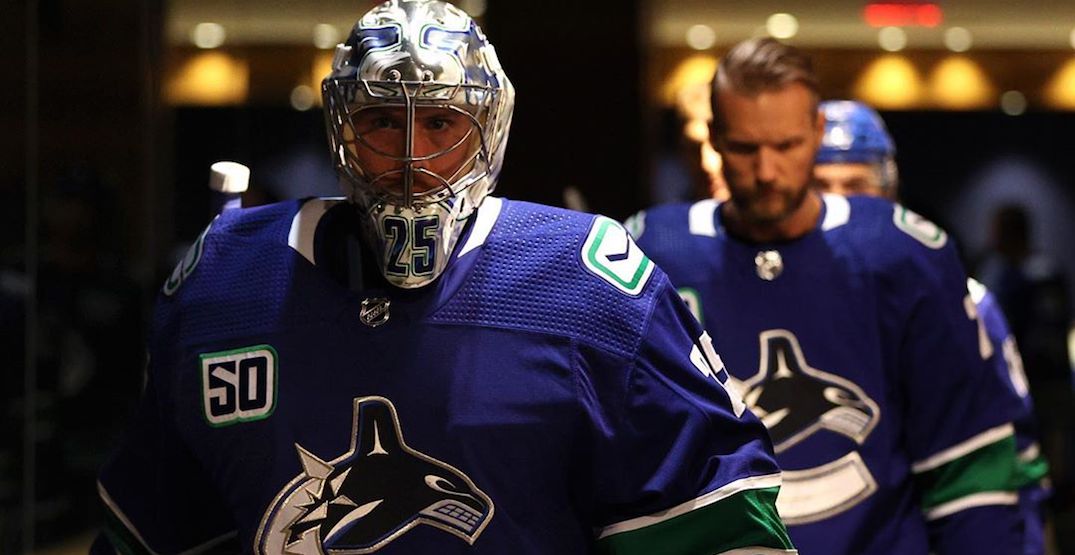 The Vancouver Canucks have surprised fans at every turn this postseason, but their next opponent is the toughest yet.

In Round 2, they’ll face off against the powerhouse Vegas Golden Knights, one of the league’s best teams, who have emerged as possible Cup favourites.

Most prognosticators believe that the Knights will make quick work of the Canucks, who have been underestimated by most of the out-of-market media throughout the postseason. The truth is that the Canucks have a real shot to win this series if they stick to their game plan.

We’ve seen major upsets in the playoffs before, and this series is no different.

Defeating the Golden Knights in a best-of-seven series is going to be a tall order, but it’s still possible to draw up a blueprint for how it can be done.

With that in mind, here’s everything the Canucks have to do to have a shot against one of the league’s best teams, ahead of the series starting tonight at 7:30 pm PT.

Markstrom has to be lights-out

While the production of players like Elias Pettersson and Quinn Hughes has gotten most of the attention, the single biggest factor in the Canucks’ success thus far has been Jacob Markstrom.

The Canucks have posted the worst share of expected goals and second-worst shot share among teams remaining in the playoffs. Most teams would struggle to get the better of their opponents with an underlying profile like that, but the Canucks happen to own the sixth-best team save percentage in the playoffs, and the second-best save percentage on shots from high-danger areas.

The team’s offensive explosion may have been the biggest story of the playoffs so far, the truth is that the series between the Canucks and Blues essentially came down to one thing: Markstrom was very good, and Jordan Binnington was very bad.

The Canucks will look to repeat those circumstances against Robin Lehner and the Vegas Golden Knights, and the good news is that there are plenty of reasons to believe they can win the goaltending battle again in the second round.

In contrast, the Golden Knights’ tandem of Robin Lehner and Marc-Andre Fleury have struggled mightily to keep pucks out of the net. Fleury posted a paltry .868 save percentage in his two line starts while Lehner hasn’t been much better at .904.

Fleury has traditionally had the Canucks’ number, but he’s been in the midst of a rapid decline all season.

@walsha why did you delete this tweet? Your job is to advocate on behalf of your client and your doing a fine job. Please continue beating this drum for the next 10-14 days. pic.twitter.com/MOgUhsyet1

Once again, the Canucks find themselves in a position to take advantage of a difficult situation in net for their opponents. If the Canucks can chase Lehner from the net early on like they did with Binnington, they may find themselves facing off against a cold, aging, and bitter Fleury. Or better yet, Peter DeBoer could be reluctant to turn to Fleury after the controversy, and stick with Lehner even if he struggles.

Rattling Lehner seems possible given how he performed against them this year. It’s an absurdly small sample, but in his one game against the Canucks this season he allowed six goals and posted a .833 save percentage.

If the Canucks are going to beat the Golden Knights, the simplest path forward is to create a goaltending controversy, and that means that the game plan has to be to hit Lehner early and often with everything they can.

While the Canucks have found ways to win without necessarily getting the better of their opponents at even-strength, the reality is that to advance to the Western Conference Final, they’ll still have to play better at evens in Round 2 than they did against the St. Louis Blues. They currently own the worst rate of even-strength shots on goal of the remaining teams in the playoffs, which could spell disaster for them against a suffocating team like the Knights.

The good news is, there’s reason to believe they can improve. The Canucks were actually one of the league’s better shot-attempt generating teams at five-on-five. They just struggled to hit the net.

Travis Green has out-coached his opponents in two straight series thus far, however, and he can do it again. He’s been keen to switch up his lines throughout the playoffs, and the Canucks as a team have placed greater emphasis on getting shots down low from their forwards as opposed to from their defencemen in comparison to their approach in the regular season. These adjustments should theoretically help improve their overall shot volume.

To exploit the Knights’ goaltending, they’ll need to get as many pucks on net as possible at even-strength. The Canucks have emphasized shot quality this postseason, but that won’t be enough against Vegas. Luckily, there’s enough evidence to suggest they can find another gear.

It won’t be easy, but it is possible.

Heading into the series, Vegas has been far and away the better team at even-strength, posting the best 5-on-5 share of shot attempts and expected goals of any team in the playoffs by a wide margin. If this series comes down to which team plays better at evens, the Knights will almost certainly win the series.

On special teams, however, the Canucks have an advantage. While both teams have fared fairly evenly on special teams in the playoffs, the Golden Knights were awful on the PK in the regular season, killing off just 76.6% of their penalties and putting them at 27th overall in the league. Meanwhile, the Canucks had the league’s fourth-most lethal power play at 24.2%.

While the Knights’ power play was quite good this year as well and the Canucks’ penalty kill was only middling, the stage is still set for them to win the special teams battle. If the Canucks can get good goaltending and play disciplined enough hockey to keep the Knights contained at 5-on-5, we could see an upset.

Draw a lot of penalties

It won’t be enough for the Canucks to simply be better than the Knights on special teams, however.

For Vancouver to really have a shot, they’ll have to tip the scales in their favour by playing as little of the game as possible at 5-on-5. It’s a strategy that already worked against the Blues, as the Canucks spent a whopping 66:18 on the power play, the most of any team aside from the Philadelphia Flyers. The Canucks are currently tied with the Colorado Avalanche for most power play goals (11) in the playoffs.

To be effective at this stage in their development, the Canucks need to get opportunities on the power play, and to do that, they’ll need to draw as many penalties as possible. Luckily, they have an asset on that front in Elias Pettersson, who was adept at drawing penalties this season and is tied for second, with four other players, in penalties-drawn since the start of the playoffs.

While the Golden Knights were the better team this season and throughout the playoffs, they still have weaknesses the Canucks can exploit. In all likelihood, they’re going to get outplayed at 5-on-5, but with great goaltending, a hot power play, and a bit of luck, another series win is within reach.