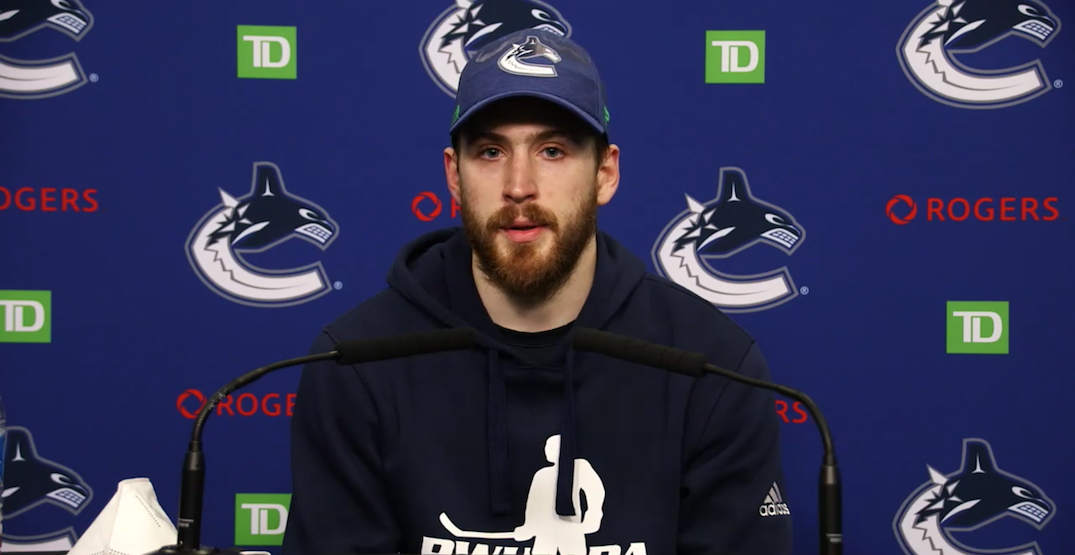 Women’s hockey has an ally in Tyler Motte.

It’s been nearly two years since the Canadian Women’s Hockey League folded, with the league claiming “the business model has proven to be economically unsustainable.”

Weeks later, more than 200 players banded together, threatening to boycott professional hockey until a viable league was created.

“We will not play in ANY professional leagues in North America this season until we get the resources that professional hockey demands and deserves,” the players announced in a statement at the time. “We cannot make a sustainable living playing in the current state of the professional game.

“Having no health insurance and making as low as two thousand dollars a season means players can’t adequately train and prepare to play at the highest level.”

Many players followed through on that promise.

Canucks players were rocking their PWHPA merchandise for International Women’s Day on March 8, but Motte clearly feels a responsibility to help the cause beyond one day a year.

“I think it’s crucial,” Motte said, responding to a question from Daily Hive about the importance of NHL players supporting women’s hockey. “We can’t just support on the men’s side, we support the women as well. There’s a lot of talented women out there, through the college game all the way up into pros, and little things like this is something easy that we can do to show our support for them.

"It's crucial. We can't just support the men's side, we have to support the women as well." – Tyler Motte speaks on the PWHPA pic.twitter.com/KaEKC7YUpX

“We’ve seen some games this year that have been pretty exciting. We see the skill, we see the speed. They can play the game, absolutely.

“Just showing our support in simple ways I think goes a long way, and hopefully we can kind of keep that snowball effect rolling for them and continue to show our support.”

While the National Women’s Hockey League (NWHL) is still in operation, and expanded to Toronto last year, many players have chosen not to play in the league.

“There’s not much to say,” Canadian Olympic star Marie Philip-Poulin told the CBC’s Andi Petrillo last year. “I don’t know if it’s professional. I think there’s a reason why many of us are not playing in that league.”

“We’re not asking for millions like the NHL guys, just something [where] we can wake up every day and go to work. Just having that dream job,” Poulin said. “We work as hard [as the men].”

The PWHPA has instead organized a number of events and exhibition games, and participated in the last two NHL All-Star Games.

Many people have called for the NHL to step in and form a women’s league, similar to what the NBA did with the WNBA in 1996.

“I believe we need the NHL’s infrastructure to push us to that next level,” Cassie Campbell-Pascall told Daily Hive earlier this month.

That hasn’t happened yet, but at least until then, players like Motte are helping to continue to shine a spotlight on the women’s game.