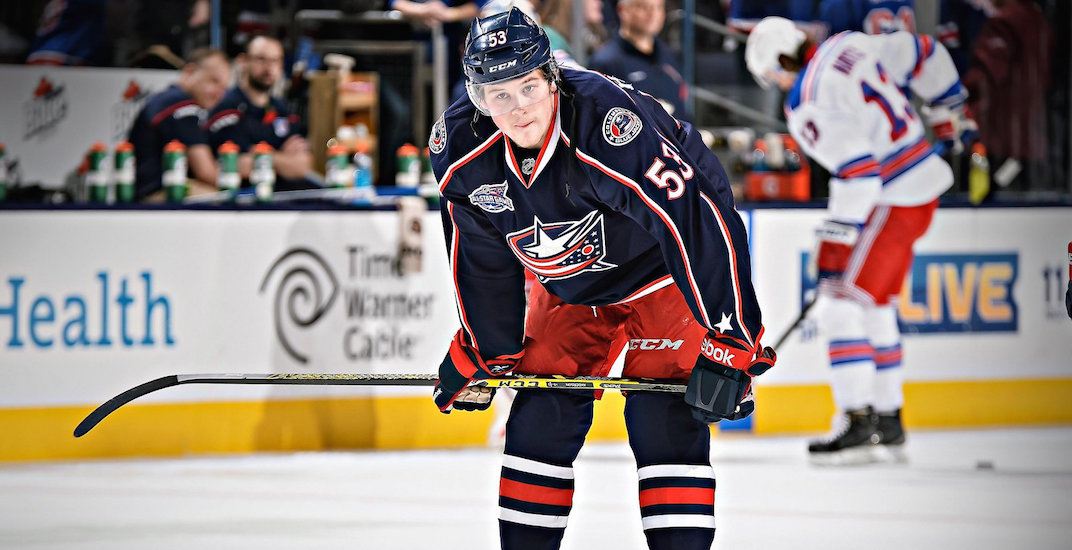 The season hasn’t started yet, but the Vancouver Canucks are already talking trade.

Hearing #Canucks gm Jim Benning has called Columbus to inquire about Josh Anderson who Elliotte Friedman reports has asked for a trade.

According to a report from News 1130’s Rick Dhaliwal, Canucks general manager Jim Benning has reached out to the Columbus Blue Jackets about restricted free agent Josh Anderson. The 23-year-old right winger is currently in a contract dispute with the team, and has reportedly requested a trade.

Anderson played his first full season in the NHL last year, scoring 17 goals and adding 12 assists in 78 games with the Blue Jackets. The 6-foot-3, 221-pound winger added 89 penalty minutes, including five fights, while receiving 12:01 of ice time per game, primarily at even strength.

Looking at his advanced stats, he didn’t rank well in Corsi, finishing second-last among Blue Jackets forwards with a CF% of 46.97.

Here’s the scouting report on Anderson, courtesy of The Hockey News:

Versatile, he was a big scorer in the junior ranks but also an accomplished role player. Works hard and isn’t shy about playing a physical brand of hockey. Owns terrific size, too.

The reason for the Canucks’ interest in Anderson is obvious. He’s an aggressive, big body who can add offence. That’s something the Canucks are lacking at the moment.

Derek Dorsett provides toughness, but he’s getting older. The three PTO invitees still at training camp – Scottie Upshall, Ryan White, and Darren Archibald – all play a similar style. Perhaps that’s showing the Canucks’ cards a little, as to what they’d like to add to their lineup.

If Columbus is open to trading him, you’d have to think they’d want a player that can contribute right away in return, as opposed to a draft pick or prospect. The Blue Jackets had a breakout season last year, finishing with the fourth-best record in the NHL.

So who could they offer?

Purely speculation, but perhaps Brandon Sutter would interest them, as a versatile forward. With Sam Gagner, Alex Burmistrov, and Markus Granlund in the fold, the Canucks have other options to centre their third and fourth line.

Maybe they have room on their defence for Erik Gudbranson, who the Canucks reportedly tried to trade in the offseason. Surely he would be a favourite of Columbus head coach John Tortorella.

If Columbus is willing to take on a prospect that’s close to making it in the NHL, perhaps Nikolay Goldobin would intrigue them.

Whatever the case, it’ll be interesting to see where this goes.