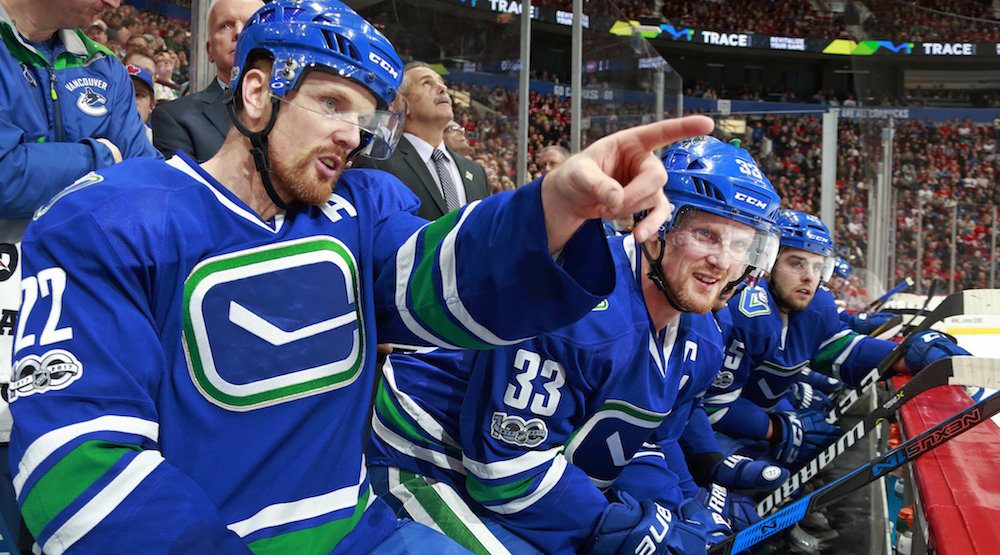 They say you can’t teach an old dog new tricks.

Henrik and Daniel Sedin, who turned 37 years old today, certainly are old dogs. While they’ve been coming up with new tricks for years, after 16 years in the league we ought to have an idea of the optimal player to play alongside them.

With respect to Trent Klatt, Magnus Arvedson, and Jason King, the first truly successful Sedin linemate was Anson Carter in 2005-06.

Carter was a right-shot, who knew how to get to open spaces and could score goals.

The Sedins went on to have success with Alex Burrows and Jannik Hansen – two-way players with speed and puck retrieval abilities. Radim Vrbata and Mikael Samuelsson – two snipers more along the Carter mold – also enjoyed limited success with the twins.

Henrik and Daniel have certainly slowed down over the years, so they’ll need a bit of speed on their wing. They’re also in danger of becoming somewhat of a liability defensively as they slow down, so finding them a defensive conscious makes sense.

If head coach Travis Green can find the right fit for the twins, it could go a long way into prolonging their careers. Henrik finished last season with just 51 points in 82 games, his least productive season since 2003-04. Daniel, who had just 44 points, scored fewer goals (15) than he did as a 20-year-old rookie (20).

Plenty of people have tried to come up with the secret sauce to identify what works with the Sedins, but the reality is that many different types of players can work with them, provided they know how Henrik and Daniel play.

They need someone who ‘gets’ them, and that takes longer for some than others.

The twins play unlike any other two players in the league, so playing with them is easier said than done. They need a winger that is quick on the forecheck and can join in on the cycle, but also someone that knows when to get open in front of the net and convert on their wizardry.

That’s something Steve Bernier couldn’t do.

The Sedins started training camp with Nikolay Goldobin on their wing, before Sam Gagner began riding shotgun on their line for the games in China. With the team back home, Brock Boeser appears next up, as he was lined up with them at practice on Monday.

Boeser could be a fit like Carter, Vrbata, and Samuelsson, but that might be a tall ask for the rookie.

If Boeser figures out how to play with the twins while figuring out his game at the NHL level, it could work. But shouldn’t the coach choose someone that already knows how they operate?

Markus Granlund is the obvious choice, given he had success with the twins late last season, after watching them from the bench for three-quarters of a year. He’s fast, defensively sound, and can score – as evidenced by his 19 goals in 69 games in 2016-17. Could he be a Finnish version of Jannik Hansen, getting in quick on the forecheck and potting goals?

Players like Boeser, Gagner, and Goldobin make sense in theory, and maybe they’ll have success with the twins down the road. With just two games remaining in preseason and the Sedins pointless in the exhibition season to this point, the time for experimenting is over. What’s needed now is a player who can jumpstart the Sedins’ game and get them off to the right start.