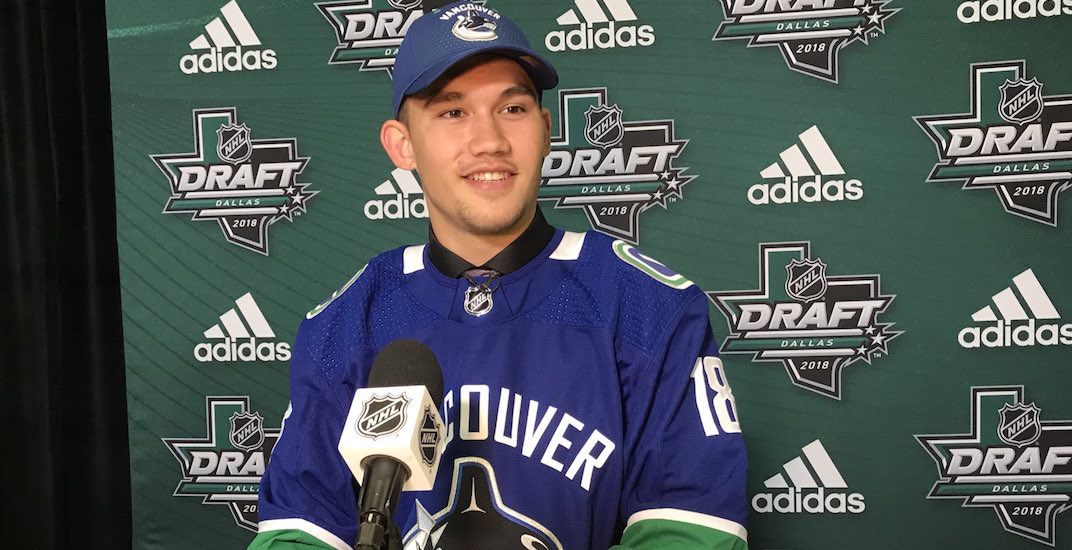 He may not be the best player in the draft, but he certainly has the best name.

After selecting defenceman Quinn Hughes with the seventh overall pick on Friday, the Vancouver Canucks took another step towards building their back-end, picking Jett Woo with their second-round selection.

“I’m still shaking,” Woo told reporters in Dallas. “There are no words right now. This is incredible.”

A 6-foot-0, 205-pound blueliner, Woo was Vancouver’s choice with the 37th overall pick. The 17-year-old scored 25 points in 44 games with the Moose Jaw Warriors last year.

The Winnipeg native had an injury-plagued season, missing six weeks early on with a separated shoulder, before missing a month with a strained oblique muscle and hip ailment.

And yes, his parents named him after actor Jett Li.

“It’s pretty cool. My parents know the full story, but I think my grandparents were going to host Jet and that’s where the connection came from.”

A right-shot defenceman, Woo is a physical player. He was a fan favourite in Moose Jaw, with fans giving him a Ric Flair style “woo!” after big hits.

“If you don’t have your head up, look out,” said John Williams of NHL Central Scouting. “He reminds me of former St. Louis Blues defenceman Barret Jackman. He usually gets one or two big hits every night, but his skill level has improved this season. He has a good shot, makes plays, and his skating has gotten considerably better.”

Woo wore No. 4 because of Bobby Orr, but says he looks up to Shea Weber.

“I feel having that extra grit kind of helps me in the game,” said Woo in an interview with NHL.com before the draft. “I always bring it back to Shea Weber. One time I watched a game of his and a player was coming down on his side but cut across to the other defenceman and I think it was because he didn’t want to take Shea Weber 1-on-1. That’s something I want to bring to the game; be that guy that opponents are scared to play against.”

The Canucks hold four more draft picks in the draft, which they’ll make on Saturday morning in Dallas.