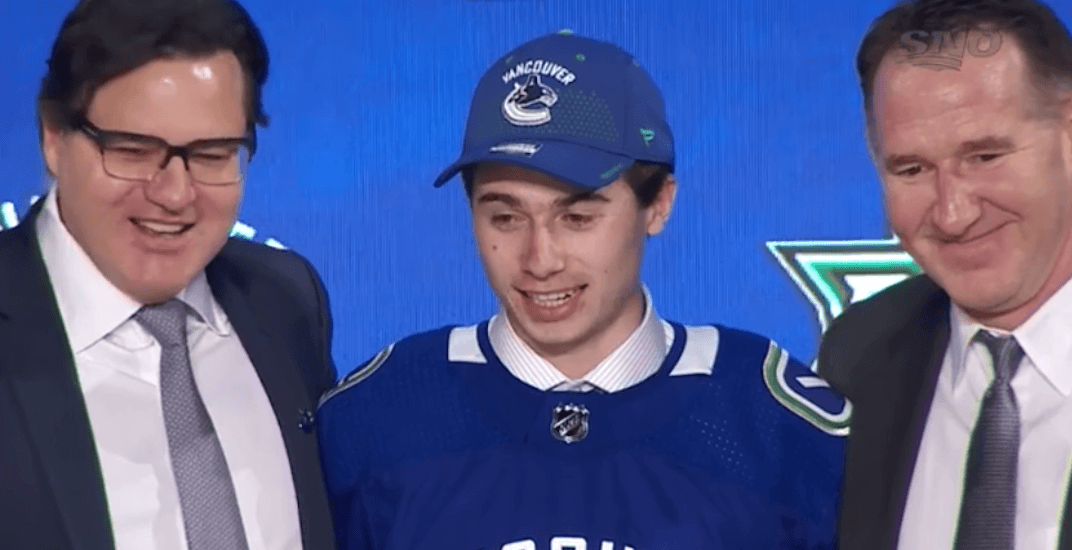 The Vancouver Canucks got their defenceman.

Quinn Hughes is the newest member of the organization, after GM Jim Benning selected the dynamic, offensive University of Michigan defenceman with the seventh overall pick.

Hughes fell to the Canucks after Arizona, and to a lesser degree Montreal, went off the board with their picks. It left Vancouver with their choice of every defenceman in the draft, save for Rasmus Dahlin.

“We love Quinn Hughes. I love the way he skates,” said Benning, beaming in an interview with Sportsnet immediately after making the pick.

"I didn't think he was going to be there, but I'm so happy that he was."

“I’m so excited for our fans right now. I didn’t think he was going to be there, but I’m so happy that he was.

“I’m over the moon right now.”

I’m not sure I’ve ever seen Benning so happy. I also can’t remember the last time the Canucks caught a break in the draft.

Hughes is a smooth-skating blueliner, with tremendous offensive instincts. He projects to be a top-pairing defenceman that can run a power play. In other words, he’s exactly what the Canucks need.

Here’s how TSN’s Craig Button, who compared his game to Morgan Rielly, described him:

He plays a go-go-go offensive game, at times more like a rover than a defenceman. He’s fearless, not afraid to make high risk, high reward but also high danger plays.

He’s a little undersized for his position at 5-foot-10 and 174 pounds, but that didn’t seem to matter in the NCAA last year.

Hughes scored 29 points (5-24-29) in 37 games in his freshman season with Michigan. He was named to the Big Ten All-Rookie Team and Second All-Star Team.

Born in Orlando, Florida, he scored three points in seven games for Team USA at the World Juniors and was the only only teenager selected to play for his country at the World Hockey Championships, playing alongside players like Patrick Kane and Johnny Gaudreau.

“I’m very excited,” said Hughes in an interview with Sportsnet. “I thought I had really good interviews with Vancouver, it’s obviously a hockey market. I don’t really know what to say right now, I’m excited to get started.”

Quinn is the first of three brothers expected to play in the NHL. His brother Jack is the early consensus No. 1 pick in next year’s draft, which will be held in Vancouver. His other brother Luke is only 14, but has already committed to play at the University of Michigan.

Though Quinn was born in the United States, he is a dual citizen, and says he developed his passion for hockey while living in Canada.

Quinn’s father, Jim, played NCAA hockey in the 1980s and has coached professionally. His mom, Ellen, played hockey, lacrosse, and soccer at a collegiate level and is a member of the New Hampshire Athletics Hall of Fame.

With all due respect to Olli Juolevi, Hughes is now the most promising defenceman prospect in the Canucks organization.