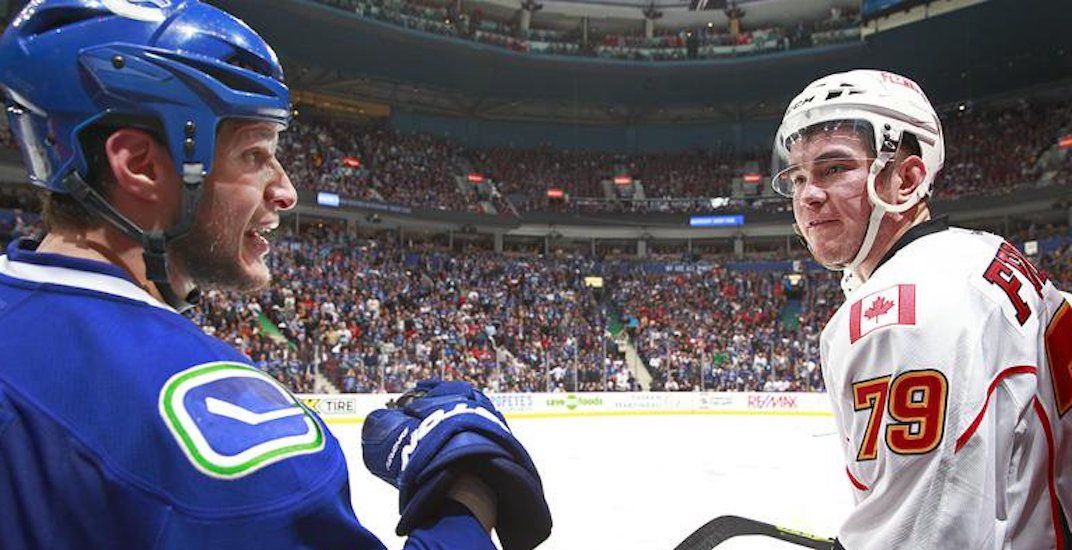 Micheal Ferland is on the trade block and the Vancouver Canucks are interested.

Sportsnet insider Elliotte Friedman dropped that nugget of information in Wednesday’s edition of his popular 31 Thoughts column, with the Boston Bruins, Edmonton Oilers, and Pittsburgh Penguins, among others, also interested.

Now with the Carolina Hurricanes, Ferland is well known around these parts, as he was enemy No. 1 for Canucks fans during the 2015 playoffs while with the Calgary Flames. A rookie at the time, Ferland was a physical force and had an ongoing feud with Kevin Bieksa during the six-game series with the Canucks. He hit the scoresheet too, scoring four points in the Flames’ series win, including two goals and an assist in the clinching game.

Following a career-best season in 2017-18 where he scored 21 goals and 41 points, Ferland was included in last summer’s blockbuster trade that also included Dougie Hamilton, Noah Hanifin, and Elias Lindholm.

The 26-year-old is scoring at an even better pace this season, notching 13 goals and 25 points in 38 games for the Hurricanes.

The 6-foot-2, 208-pound left winger is in the last year of a contract carrying a $1.75 million cap hit and is due for a big pay day. Friedman reports that the both sides are far apart in contract negotiations, so with Carolina seven points back of a playoff spot, it certainly makes sense to get something for the pending unrestricted free agent before next month’s trade deadline.

Despite the fact the Canucks are in the mix for a playoff spot, they should still be considered a rebuilding team. They shouldn’t have an appetite for dealing draft picks for the rugged winger. They’re also not in a position to trade for a player that they could potentially lose in free agency.

Meanwhile, the Hurricanes are set on defence, dreadful in goal, and could use help at forward.

Expect the rumours and speculation to intensify as we get closer to the February 25 trade deadline.