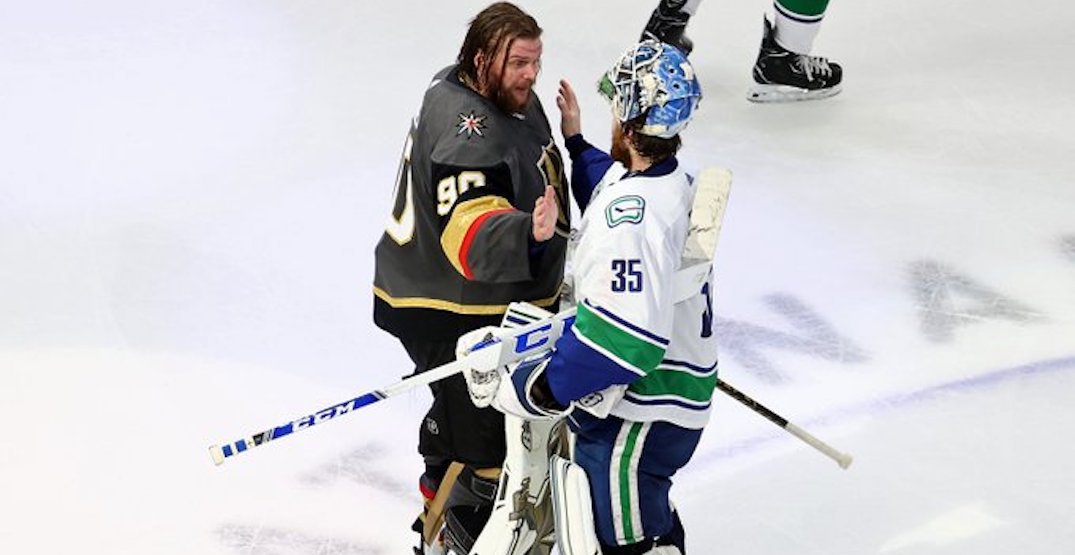 With their impressive performance this postseason, the Vancouver Canucks have officially arrived as one of the NHL’s brightest young teams.

While they ultimately couldn’t hold on against a superior Golden Knights team, the series served as a great opportunity to see how far the Canucks have to go to become a real Stanley Cup contender.

If this series was any indication, the Canucks are still a long way away from reaching that goal, but are also probably a lot closer than most observers thought they would be at the start of the season.

As always, the Canucks can take away a lot of lessons from their series loss against Vegas. Here are a few of the biggest.

1. They still have a long way to go

The Canucks had the offensive talent and goaltending to beat up on weaker teams this season, so it was revealing to see how they stacked up against stronger teams in the first two rounds.

They performed admirably against the Blues and held on for dear life against Vegas, but at the end of the day, they still posted the third-worst shot and expected goal share of any team in the postseason, besting only the lowly Arizona Coyotes and Chicago Blackhawks. Talent and goaltending can get you a long way, but if you’re getting consistently outshot and out-chanced, those chickens will eventually come home to roost as they did against the Golden Knights.

While the Canucks clearly exceeded expectations this year, it would be naive to think it will be a straight shot towards Cup contention from here on out. They barely have the money to keep this roster intact, let alone improve.

With their cap situation, the Canucks could easily spend the next few years treading water. At the same time, their best players are 20 and 21 years old, and still have a lot of room to grow. They were able to take one of the best teams in the league to the brink of elimination with no prior playoff experience.

Imagine what they could do with a couple more years under their belts.

When I laid out all the things the Canucks had to do to beat Vegas in a best-of-seven series, getting good goaltending was at the top of the list.

I’m not sure many had Thatcher Demko pegged as their potential saviour at the beginning of the series, though.

Throughout the playoffs, the Canucks were able to find success by routinely winning the goaltending battle. Jacob Markstrom stole multiple games for Vancouver, particularly against the Blues, and posted a very respectable .919 postseason save percentage. But that was only a warm up for an even more astonishing performance. When Markstrom was unable to suit up for Game 5, Demko stepped in and put on an absolute clinic, stealing two games and allowing just two goals in 185 minutes of postseason play en route to a superhuman .985 save percentage.

Demko struggled at times during the regular season, so it’s difficult to say whether or not he’s officially arrived as an NHL-caliber starting goalie, but his performance definitely makes the situation in the Canucks’ crease more interesting. Markstrom’s contract is set to expire and he’s due for a hefty raise, and the Canucks will be forced to make a decision in short order with the expansion draft looming.

There’s going to be a lot of temptation to roll with the hot, young, unproven goaltender given that the Canucks don’t exactly have a lot of cap space, but ultimately it’s unwise to hitch your future to a goalie with a spotty NHL record because of his performance over a three-game sample size.

Don’t be surprised if they come back with both goalies next season and wait until the end of the season to make a decision on which one to expose in the expansion draft.

Any time an underdog team with a narrow path to victory manages to play exactly the way they need to to win, the coach is going to deserve some credit.

The Canucks were outmanned, outshot, and overwhelmed for most of the series and still managed to win three games. Green had the Canucks playing a very disciplined brand of hockey and made a number of key adjustments during and between games to keep them competitive.

Sat talking about how Demko's style doesn't mesh with the Canucks normal style (points to Valiquette's numbers) and that's why they had to play the park the bus style. Doesn't think Green will play that style long-term.

Sat thinks they should sell high on Demko. #preach

Green reportedly spent the entire break heading into the series against Minnesota working closely with the team’s analytics department on improving the team’s defensive results, which really appears to have paid off.

He also took advantage of the unique circumstances of bubble life, coming up with increasingly creative and bizarre ways to keep his lineup a secret. It’s unclear how much of an impact it had, but it’s admirable that he left no stone unturned when it came to finding ways to gain a competitive advantage.

Green will be entering the final year of his deal and if the team’s performance against better opponents is any indication, the Canucks should be working overtime to get him locked down for the foreseeable future.

4. Overpaying for depth is unnecessary

If you had told most Canucks fans at the beginning of the season that not only would they knock off the Cup champs in Round 1, but that they’d also take one of the best teams in the league all the way to Game 7 in the second round, I doubt many of them would have believed you.

How the Canucks managed to do it, on the other hand, is a bit less surprising. All season long, the Canucks were carried by their goaltending and the top of their lineup, and it was more or less the same story in the postseason.

The Canucks have spent a lot of money over the past few years on depth players in the hopes that their grit, character, or intangibles would pay off in a tough playoff series, but in the end, they got completely outclassed.

For the cap-heads out there: the Canucks spent $24,096,667 (or 29.56% of their cap space) on players who suited up but did not register a point over their seven-game series with Vegas

The Canucks bottom-six combined for one goal (Jake Virtanen) and two assists (Brandon Sutter and Tyler Motte) over the course of the series, and only Adam Gaudette and Tyler Motte managed to keep their share of expected goals north of 30%.

In other words, the Canucks didn’t exactly get a great return on their expensive depth players this postseason. Sutter and Motte each had a couple of strong showings in Round 1; but the two marquee free-agent signings, Tyler Myers and Loui Eriksson, each played 10 games and combined for zero points. This offseason, getting more out of their depth (and spending more wisely on that depth) will have to be a top priority if this team wants to be more than just a flash in the pan.

5. The defence needs an overhaul

One of the biggest struggles the Canucks faced in this series was entering the offensive zone cleanly. Their breakouts were ugly and they were routinely forced to dump the puck in, which played a large role in their inability to generate zone time against a two-way powerhouse in the Golden Knights.

Obviously, breaking the puck out starts with the players on your back end, and for most of the series the Canucks’ defenders looked completely outmatched. Alex Edler and Troy Stecher managed to fare reasonably well (in a relative sense) in terms of fancy stats, but the rest of the defence failed to keep their shot or expected goal shares above 40%.

Even Quinn Hughes struggled towards the end of the series, although rumours have persisted that he was battling injuries for much of the postseason. At any rate, the good news is that Hughes is only 20 years old and has nowhere to go but up. The same can’t be said of most of the rest of the Canucks defence. Aside from Stecher, every Canucks defender will be over 30 at the start of next season, which makes them unlikely to perform even at the level we saw during the playoffs.

The Canucks will likely have a roster spot opening up this season on the right hand side, with both Chris Tanev and Stecher’s contracts set to expire, but it’s unclear whether or not they have a player in their system that’s capable of stepping into a full-time role in the NHL. How they decide to deal with their back end is liable to be one of the biggest stories of the offseason, and if this series was any indication, only Hughes is untouchable.

6. They could still use some help on the wing

While many of the Canucks’ wingers made strong cameo appearances for a game or two this postseason, their top two centres were their only consistent offensive producers. The Canucks only managed to score eight goals against the Knights over the course of the series, and half of them came from Pettersson or Horvat.

While Brock Boeser, Tyler Toffoli, and particularly J.T. Miller all had strong performances for the Canucks at certain points this year, the offence dried up in Round 2 and the team simply didn’t have a lot of other options when it came time to mix things up. They couldn’t get much out of their hodgepodge of middle and bottom-six wingers, with only Virtanen managing to pot a goal over the course of the series.

While Tanner Pearson certainly looked electric alongside Bo Horvat at times this season, it’s clear that he won’t be enough on his own to make the second line a consistent offensive threat. The elusive winger for Horvat remains on the Canucks’ wish list. Though at this point, most fans would probably be thankful just to never have to see him with Eriksson again.