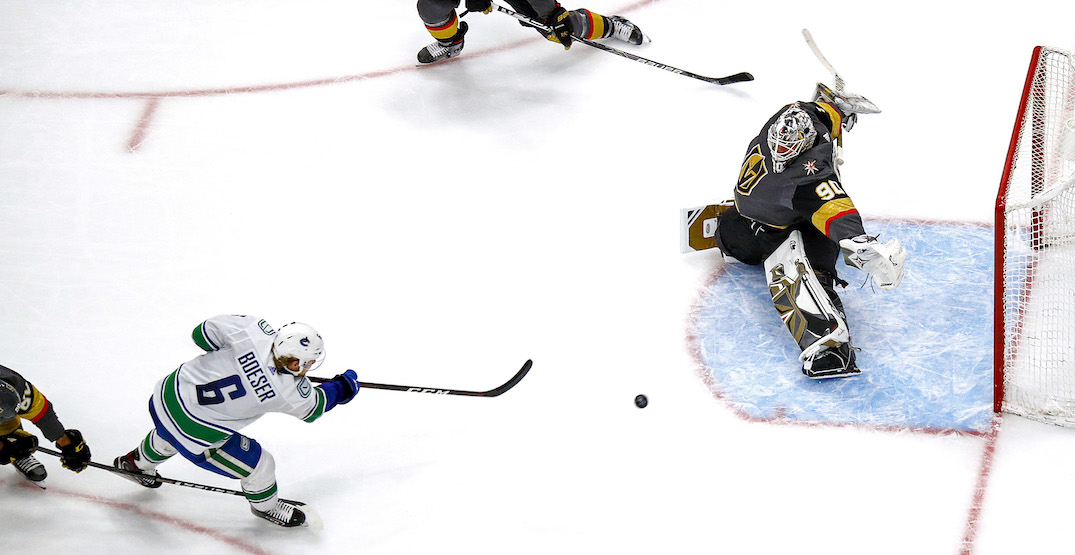 It was a great run, but the Vancouver Canucks have been eliminated from the Stanley Cup Playoffs.

Thatcher Demko did everything in his power to carry his team to the Western Conference Finals, but the Vegas Golden Knights eventually got a puck past him, then added a pair of empty netters to shut out the Canucks 3-0 and win the series in seven games.

Theodore's shot goes off the post and in and #VegasBorn take a 1-0 lead on the #Canucks pic.twitter.com/hyQuQk5rfU

The Golden Knights completely dominated possession in this game right from the opening face-off. Had it not been for Demko, Game 7 would’ve been a blowout.

The back-to-back certainly didn’t help matters, but the Canucks looked like a team with nothing left in the tank, generating just 15 shots in the game.

Demko made 33 saves, many of which were high quality chances for Vegas.

The puck somehow stayed out in this mad scramble in front of Thatcher Demko #Canucks #VegasBorn pic.twitter.com/4lE0BVqQCM

Even with Demko’s masterful performance, the best save in the game may have come from Robin Lehner.

Brock Boeser had a fantastic chance to open the scoring in the second period, but Lehner came up with one of the greatest saves of the playoffs.

The Canucks had another massive opportunity to score when Ryan Reaves was assessed a five minute major for a hit to the head of Tyler Motte.

But the Canucks responded with a pitiful power play, mustering just one shot and struggling just to maintain zone time. Despite eleven minutes of power play time in the game, they didn’t really generate any good looks on the man advantage.

The Golden Knights had dominated possession in other games in the series, but Game 7 was on another level. You have to wonder how much fatigue played a factor, the Canucks were worn down by a relentless Vegas forecheck for seven games, five of which were played in the last seven days.

Handshakes between the #Canucks and #VegasBorn after Game 7 pic.twitter.com/IA9TGizxJo

Demko’s three-game playoff stint was nothing short of remarkable. The 24-year-old had a .985 SV%, 0.64 GAA, and one shutout. His 9.07 GSAA was the best of any goalie in the playoffs despite him only starting three games, and his high-danger SV% of .973 was in a league of its own.

Despite an underwhelming Game 7 performance from pretty much any Canuck not named Demko, it shouldn’t tarnish the progress they made this season.

“I think there’s a lot to be proud of,” Brandon Sutter said after the game. “The guys that were experiencing this for the first time, they showed a lot. To get a taste of being in the playoffs again, to see the energy the young guys brought to our team, it was awesome. Proud of the way we played”

The Canucks gained a ton of valuable playoff experience. They beat Minnesota after losing the first game of the play-in series, then went on to take down the defending Stanley Cup champions, before battling back from a 3-1 series deficit to push one of the NHL’s best teams to a Game 7.

“I don’t think many people thought we’d be a goal away from going to the semi-finals,” said Travis Green. “What our team has gone through… it’ll help our group. It’ll help next year, it’ll help in five years. Gotta fall and get up, fall and get up, and learn how hard it is.”

The core players proved they could produce in the playoffs. Elias Pettersson and JT Miller led the team with 18 points each in 17 games, while Quinn Hughes broke records as a rookie defenceman and Bo Horvat’s 1o goals leads the NHL.

With the playoff run over, the Canucks will now get to work on planning out a crucial offseason. There are a number of players with expiring contracts, and they’ll also be able to negotiate with Pettersson and Hughes on new deals.