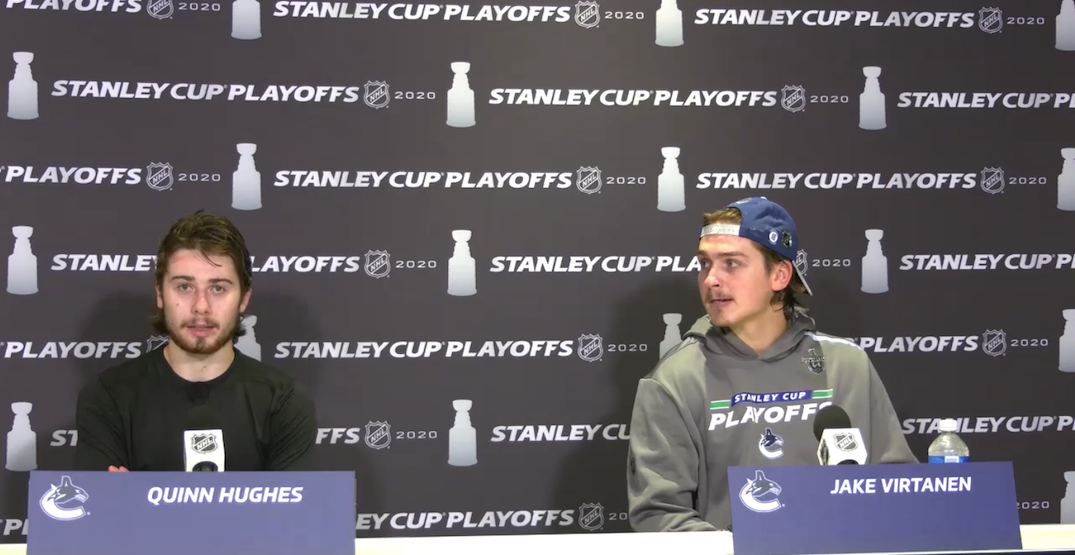 It sure sounded like the Canucks rookie defenceman let that slip during his post-game media availability after an improbable 4-0 win in Game 6.

Hughes was asked by Sportsnet’s Iain MacIntyre if he feels like he’s playing better now than at the start of the series.

This was the 20-year-old’s response:

“Umm yeah, I don’t want to disclose anything but, definitely feeling better now after a couple of off-days. Yes, I feel good right now, and the back-to-back tomorrow will be tough on everyone, but I think we’re excited for it.”

I’m not sure how often hockey players use the word “disclose,” but it’s certainly used often when talking (or not talking) about an injury or some other ailment.

It’s the playoffs, so teams aren’t disclosing anything, but if Hughes was indeed slowed by an injury, it would explain a lot.

After a sensational series against the St. Louis Blues, Hughes wasn’t at his best to start the series against the Vegas Golden Knights. He struggled at times, which is understandable given Vegas is game-planning against him, but it’s also unusual given how well his rookie season has gone.

But after posting just one assist in the first three games, Hughes now has five points in his last three, heading into Game 7.

Hughes said he feels good right now, and certainly he looked as good as ever when he set up JT Miller for the 2-0 goal in Game 6.

The man they call “Huggy Bear” added a goal for good measure, and if he really is “feeling better,” that’s a terrifying proposition for the Vegas Golden Knights.

Also feeling better is Jake Virtanen, who scored the game-winner on Thursday and shared the podium with Hughes after the game. Virtanen looked like he may have picked up an injury late in the game when he was rocked by Vegas defenceman Brayden McNabb.

Virtanen tries to avoid McNabb and ends up going hip on hip. Stays down and appears to injure his hip/leg. #Canucks pic.twitter.com/tDkWOe3eBI

The fact that Virtanen spoke at the podium was a good sign he’ll be okay to play in Game 7, as were the words he used to describe his condition.

“[McNabb is] a big solid guy back there, just trying to make a hit,” said Virtanen. “He caught me with my head down but other than that, feeling good. Just lost my wind there.”

At this point in the season everyone’s playing with bumps and bruises, and it’ll take a lot to keep anyone out of a Game 7. It’s just the 12th Game 7 in franchise history, and the team has an opportunity to go where only three Canucks teams have gone before: to the Conference Finals.

It all gets going at 6 pm PT tonight.