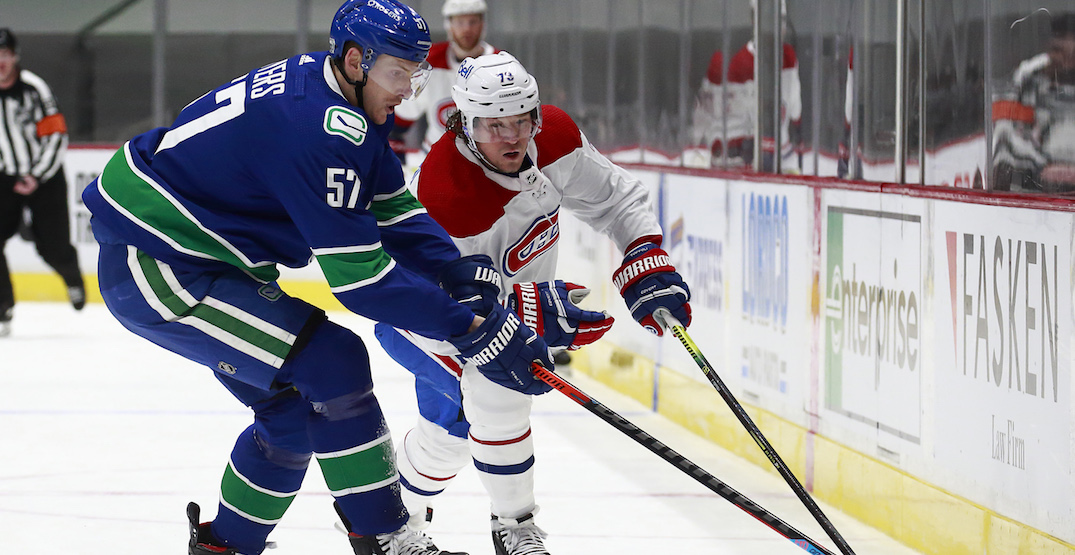 The Vancouver Canucks have had an alarming start to this season, to put it mildly.

While it’s still early, after six games, a number of worrying trends have emerged. The most troubling trend has to be the Canucks’ leaky team defence, which has been among the worst in the league.

The Canucks have now given up at least three goals in every game, including 5+ goals on four occasions. Their goals-against average is now 4.67, which ranks second-last in the NHL among teams that have begun their season. They’ve given up 37 shots-against per game, the third-highest so far.

That’s not a recipe for success, leaving the Canucks with the worst winning percentage in all-Canadian North Division, even trailing the lowly Ottawa Senators.

It is early, so that’s the good news, but they have now played more than 10% of their schedule in this shortened 56-game season.

The Canucks have just two wins, and only one in regulation, which came on opening night. The poor penalty kill drew much of the attention early, and for good reason, but their problems extend beyond the PK.

While Braden Holtby and Thatcher Demko haven’t been at Vezina-levels, isn’t it telling that despite the number of goals the Canucks have given up, the heat isn’t on Vancouver’s goaltenders in the slightest?

The Montreal Canadiens are a much-improved team, but the Canucks have made them look like the 1970’s Habs in the last two games. Tyler Toffoli isn’t Guy Lafleur, and yet, he has five goals in two games against the Canucks.

“Disappointed. Very,” said head coach Travis Green, who had to be steaming mad after what he saw for the last two games.

“We weren’t just giving up scoring chances, we were giving up goals. Gift-wrapped probably four-to-five goals. It wasn’t a game where we were hemmed in our zone the whole game… In this league, if you’re giving up chances that are gifts, you’re going to lose bad. We did that tonight.”

Green hit the nail on the head. The Canucks aren’t just giving up chances, they’re giving up Grade-A chances, sometimes out of nowhere.

On Wednesday, Vancouver scored their way out of trouble, securing a 6-5 win despite their irresponsible defensive behaviour. They traded goals with Montreal on Thursday in the first period, but then didn’t bother showing up for the second, hanging Demko out to dry by getting outshot 18-3.

The Canucks have never been a defensive dynamo during Green’s time in Vancouver — he hasn’t had the personnel to make that possible. But Green’s teams have always seemed to work hard for him.

Too often this season, that hasn’t been the case.

Trouble was already brewing before Alex Edler was injured on Wednesday, but that certainly didn’t help matters. The Canucks played with five defensemen for most of that game, then had to do the same on Thursday when Jalen Chatfield left the ice with an injury.

Three rookie blueliners suited up on Thursday, as Travis Hamonic is now on injured reserve. But to simply blame Thursday’s loss on inexperience on the back-end would be oversimplifying things.

Sure, Brogan Rafferty looked out of his element, but many of the Canucks’ better players were to blame on goals. Three Habs goals were scored following clear-cut breakaways. One was after Nate Schmidt fanned on a pass when he was last man back.

The second came when Elias Pettersson tried to force a pass at the opposing blue line.

The third involved both Tyler Myers and Quinn Hughes pinching up ice, with no Canucks forwards covering for them, never mind hustling back to cover the trailer who eventually scored.

With just one assist in six games, Pettersson hasn’t looked himself, and clearly, him getting back to the level we’re used to seeing from him is massively important. Hughes also, despite six assists in six games, hasn’t been good enough defensively.

A lineup shakeup is warranted at this point. The Canucks could take the pressure off Pettersson until he snaps out of his slump, dropping him to the second line and elevating Bo Horvat to play with J.T. Miller and Brock Boeser.

I can’t believe I’m saying this but is it time to give Loui Eriksson another look to at least help the penalty kill? Does Adam Gaudette have a strong enough two-way game to rely on him at centre, or is it time to give Brandon Sutter another shot in the middle? Antoine Roussel and Jake Virtanen haven’t looked good this season — is it time for tough love for them by sitting them for a game?

Unfortunately, depth is an issue for this team, so options are limited, and none sound particularly appetizing.

So, where do they go from here? The Canucks aren’t a great defensive team, but they can be better than this. There needs to be a stronger commitment to the team defence, which involves being more structurally sound and harder on every puck.

Green talked about his team being “immature” and possibly forgetting how hard they need to work for wins.

This poor start has certainly refreshed their memories.