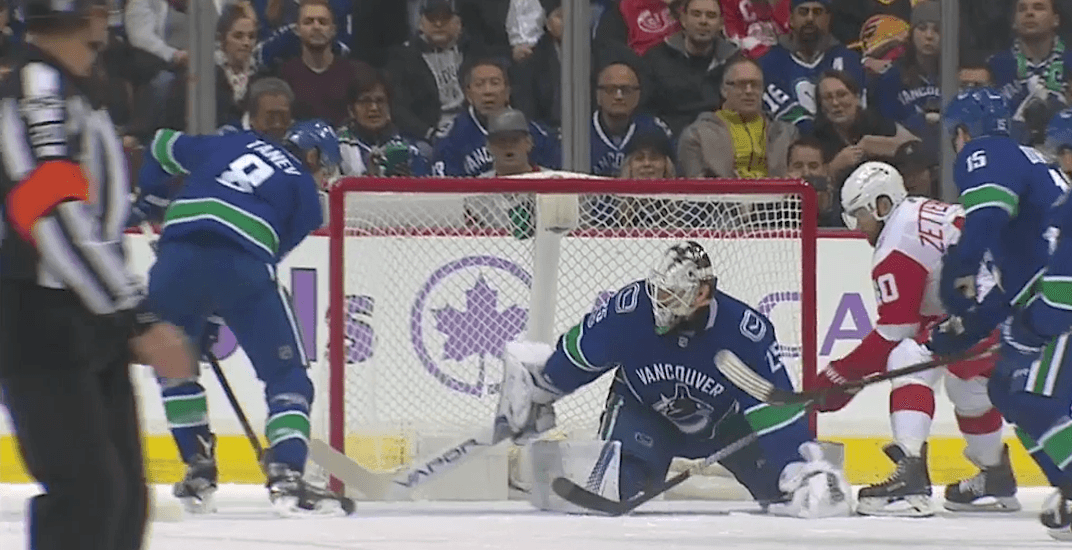 Chris Tanev is the Canucks’ best defenceman, especially in his own zone.

That’s why what happened at Rogers Arena on Monday night was so surprising.

The usually steady blueliner picked up a rebound and buried the puck into the net. The problem? He shot it past Jacob Markstrom and into his own goal.

The goal was credited to Martin Frk, who was the last Red Wings player to touch the puck before Tanev. It looked worse than it was for Tanev, as his stick was whacked was whacked by Detroit’s Anthony Mantha, changing the direction of his attempted clearance.

Either way, it’ll end up on the blooper reel.

Ironically the player most responsible for the goal, Mantha, didn’t receive a point on the play despite his quick stick.

OWN GOAL ALERT!
CHRIS TANEV STRUGGLES TO CLEAR THE PUCK AND SHOOTS IT INTO HIS OWN NET TO GIVE THE RED WINGS THE 2-0 LEAD! WHAT AM I SEEING? pic.twitter.com/5ApG8xrRxJ

The goal gave Detroit a 2-0 lead. The Canucks came back to tie the game in the third period, but wound up losing 3-2.

Just one game earlier, Tanev saved a goal, sweeping the puck off his own goal line. Guess things have a way of evening out in hockey.