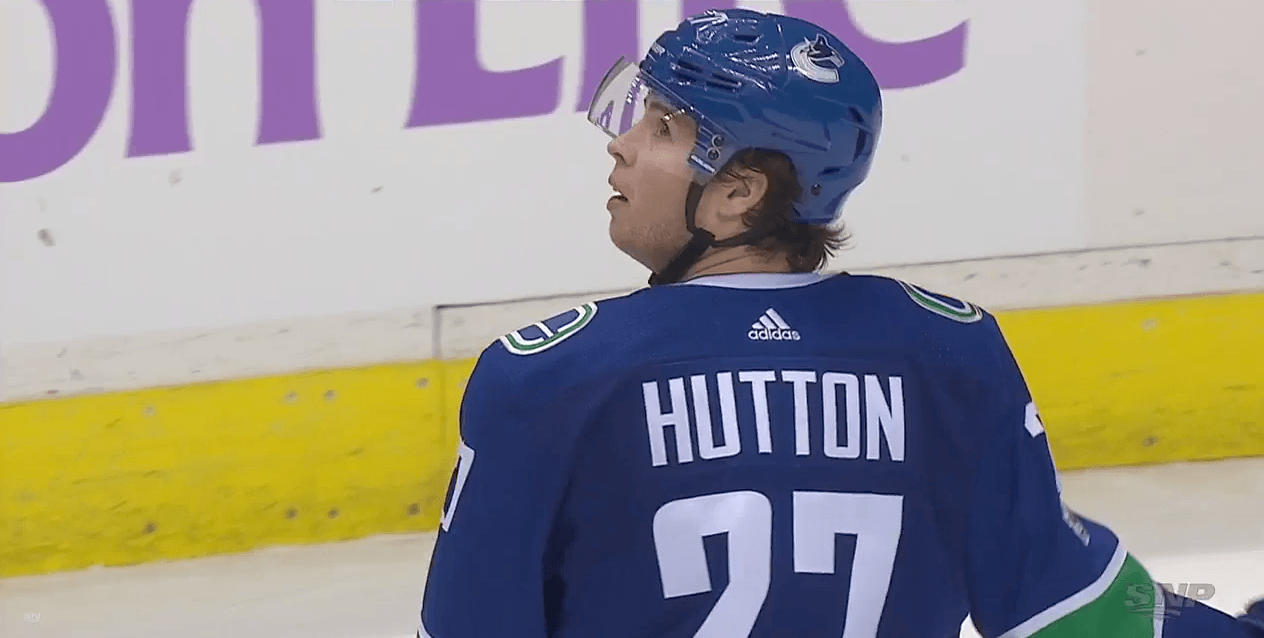 Should Detroit have won?

The final score read 3-2 Red Wings, and the game was pretty even overall – all situations shot attempts were 55-52 Vancouver – but two of those Detroit goals…

Their second goal was actually an own goal by Tanev, so there’s that. There’s also the fact the Canucks lost a challenge on the goal.

Looking at this gif, can you actually tell me Zetterberg (on the right of the goalie) didn’t interfere with Markstrom?

Because I’m surprised there’s a case to be made for it not being interference.

Then on Detroit’s winning goal, some Twitterers were hard on Marky, calling it yet another soft goal.

Soft? No. Hutton committed the cardinal Don Cherry sin – putting his stick in front of that shot right at the last moment – and Markstrom had no idea where that puck was going.

Worse, check out this zoomed-in gif made by Wyatt.

That’s a trip on Hutton, and that’s two blown calls that led to Detroit goals.

So if you said Vancouver was robbed on Monday, you weren’t wrong.

If you thought Vancouver was going to dominate the rest of the season after pounding the Penguins 4-2 on Saturday, the dream didn’t last long.

Not that anyone thought that was going to happen.

Against Pittsburgh the bounces went their way, despite the fact every line but Horvat’s was outplayed. Against the Detroit Monday, the opposite happened.

Well, not completely – it was a pretty even game but Vancouver had tons of scoring chances that weren’t going in for them. Boeser could’ve had a couple, the Sedins could’ve had like five, but that just didn’t happen.

Hockey’s a game of bounces, and because they didn’t get them against Detroit, the Canucks went from “dominant” to “good effort”. It doesn’t take much for that to happen.

At least they gave a good effort, though. We might start to take that for granted soon, but not yet… most of us are still not over the last three seasons.

You may or may not have noticed the article Jeff Paterson wrote where he spoke with Henrik Sedin about his reduced ice time after he and Daniel played under 10 minutes Saturday.

If you missed it, you missed Henrik saying he and Daniel wanted to play more. You also missed this key line in the article:

Less than 24 hours after sitting the Sedins for much of the third period, Green had both Daniel and Henrik in his office to ensure the three were on the same page.

And if you were wondering how that sub-10-minute game went over with them and what was said in that meeting, I was right there with you. The way Green played them on Monday told you everything you needed to know.

The Sedins played the first shift of the game, they started every power play shift, they were on the ice with the Canucks down one and looking to tie it in the last minute, and they played 17:04 and 16:07.

They also looked completely motivated to change the “over-the-hill” narrative from the moment the puck dropped.

They have too much pride to take being benchwarmers for the rest of the season, and that pride looked good on them this night.

Check out the puck movement that led to Henrik being about two inches away from his first goal on their first power play.

In the second, Jake set Hank up for a breakaway and what should’ve been a sure goal.

After missing those two, Hank gave up on scoring and thought he’d let Jake finish this one.

One more Virtanen from Hank chance for good measure.

And then finally, finally Daniel got one in.

No one can say Daniel didn’t earn that fist pump, but boy did the Sedins deserve more than a point each in this one.

It’s not a bad nickname. Sounds menacing, dangerous… like killers I guess.

This pic – I appreciate the effort, but killers?

The artwork on the bees’ bodies is amazing, no doubt. Can we try angry faces on the bees?

This, by Stanch… they’re still smiling but somehow it is more frightening…

I’m disappointed @SvenBaertschi couldn’t make the photoshoot for the Killer Bee line with @BoHorvat and @BBoeser16 , I won’t lie. pic.twitter.com/yA5hYvs7IU

Nice work by Steve here too.

Still, if the repercussions of eating at Chipotle are scarier than the proposition of running into these guys, the image needs work.

Against Pittsburgh Bo and Brock had four points each, Baertschi had three, the city’s most skilled photoshoppers were making pictures of them happily buzzing around, and this was Detroit coach Jeff Blashill earlier Monday:

“Connor McDavid is the best player in the world but no line in the league is playing better than that Horvat line right now.”

Did they live up to the hype? Was that even possible?

Later, he nearly scored on the wraparound.

And in the third, Vancouver tied up the game with this Del Zotto goal, set up by a Hank-like Horvat pass.

They followed up their 11-point night with just one point between them.

They’ll always have that Blashill quote though. If we’re being real, I’m not sure they’ll ever top it.

Sportsnet 650’s Rintoul and Walker were on during the broadcast during the intermissions.

Walker, in the second intermission, on Green’s best decision so far this season:

“Travis Green’s done a lot of right things and he’s pushed a lot of right buttons. The number one thing I think is he’s carved out a role for Brandon Sutter. Listen, he’s not a fan, Travis Green, he’s a pretty good hockey coach, though. This is a market where people have kind of got on a guy like Brandon Sutter, which I think is pretty ridiculous. He’s a pretty good player. I think he’s a valuable player. I think he’s a useful player in the perfect role…

When I look at Sutter, he has one goal this season, and he’s still a plus-3. Now, when you look at the competition he’s played against, I think that’s pretty remarkable, and he’s one of the biggest reasons the Canucks have gotten off to a decent start this season.”

Here’s the first thing. Coming into the season, PITB’s Daniel Wagner did an interview with Walker where he told him he’s more of an “eye test” guy than an analytics person.

Second, I sent out some tweets Monday morning saying Sutter’s line didn’t fare well at all against Pittsburgh. They had a sharply negative shot differential against Malkin’s line – the line they faced most – and really, they were lucky to escape that game without allowing a goal.

Twitter didn’t want to hear it, but on Monday that dam broke. Sutter’s line was on the ice for two of Detroit’s three goals.

Not the best time for Walker to come out with that Sutter take.

You’ve probably heard Nilsson’s been “day-to-day” with his fiancee about to deliver since the weekend.

That status took a turn just before today’s game.

Question now is what this means for the starting goalie in Calgary tomorrow, which figured to be Nilsson’s if not for the baby wait https://t.co/azk8S0n1AT

That “baby watch” title was in reference to bright-eyed goalie who could make his Canucks debut Tuesday, btw. What else would it be about?

Note: Thanks to Ryan Biech for his help with some of the gifs in this post