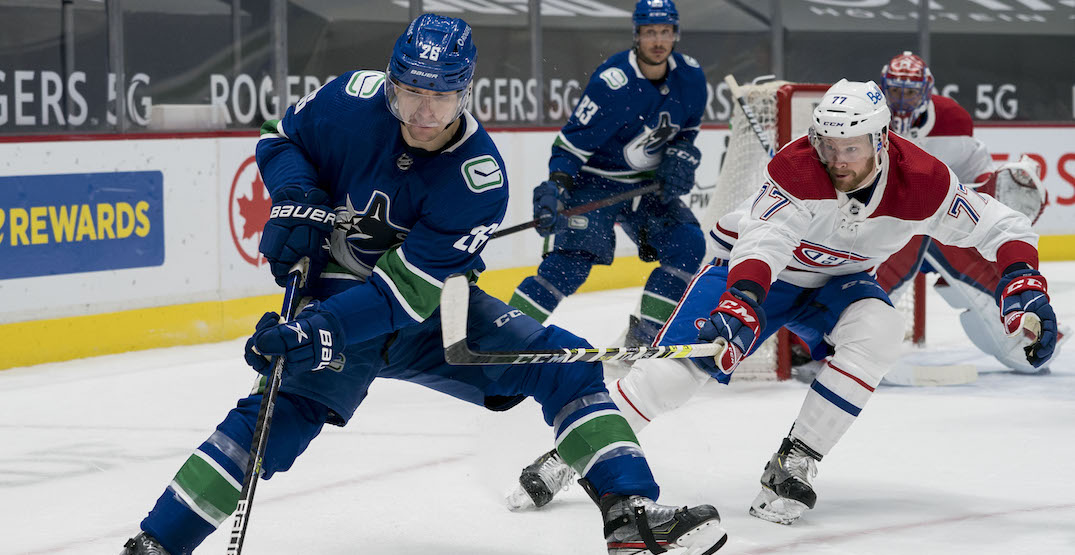 All three were out, presumably, with injuries that may or may not prevent them from playing tomorrow night at Rogers Arena against the Edmonton Oilers.

Brandon Sutter, Jay Beagle, and Antoine Roussel were all missing from the ice, causing Travis Green to rotate as a defenceman on the fourth line, as Thomas Drance of The Athletic illustrates below.

#Canucks finally show lines in drills and… yikes. Bottom-six depth about to be tested:

Green typically doesn’t like to reveal much about his lineup, so most of the questions he answered after practice were of the hypothetical variety.

“We’ll probably be missing at least one of them. Hopefully, a few, or two, of them are back in,” said Green, who indicated that playing a defenceman at forward would be unlikely.

Of the three absentees, Sutter was the only player to leave Wednesday’s game early. The Canucks are also still currently without Elias Pettersson, Tyler Motte, and Justin Bailey, who are on injured reserve.

“Adaptable is a word that we’ve used from day one,” the Canucks coach added. “I do suspect that one or two of [Sutter, Beagle, and Roussel] at least will draw into the lineup.”

Sutter, Beagle, and Roussel are all relied upon to kill penalties, so 1-2 forwards will probably need to be added to a PK unit. If Sutter and/or Beagle are out, that probably means Bo Horvat will have to kill penalties, given the need for a centre to take faceoffs. Wingers Tanner Pearson and Loui Eriksson also have PK experience.

Adam Gaudette will likely move back to centre, a spot where he hasn’t been trusted to play much this season, after playing the majority of last season in the middle.