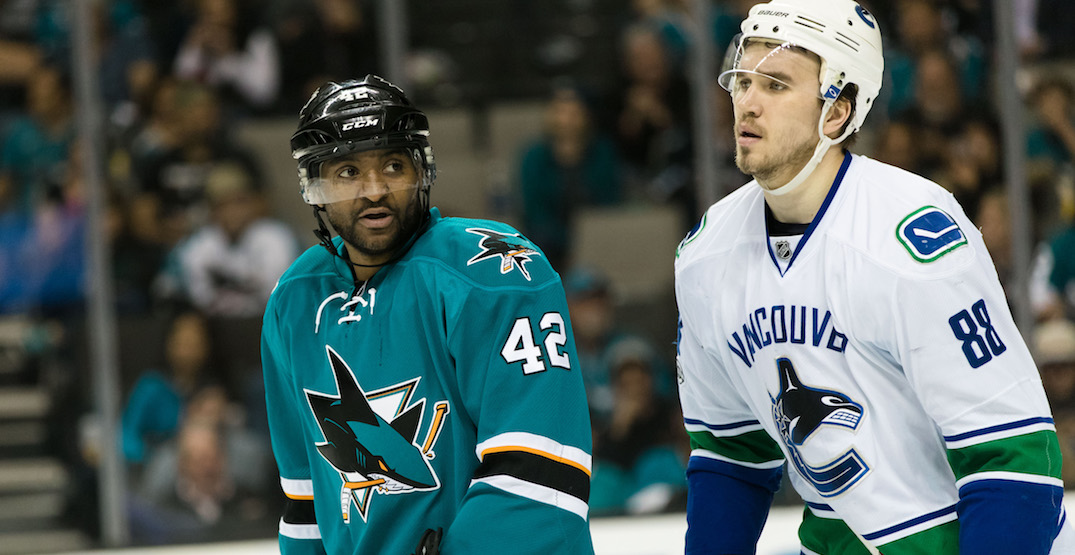 Nikita Tryamkin could be back in Vancouver as soon as next season.

The 6-foot-8 Russian defenceman is now free to speak with the Canucks, and that’s what the team plans to do, according to Sportsnet’s Elliotte Friedman. Tryamkin’s KHL team, Yekaterinburg Automobilist, was eliminated from the playoffs on Wednesday.

As VAN hosts MON, one note: D Nikita Tryamkin's KHL team eliminated from playoffs. He cannot play in the NHL this year…but has one more season until he reaches UFA status. Canucks will reach out to see what he'd like to do. Talented player with an edge.

Given that he would be signing an NHL standard player contract, Tryamkin isn’t eligible to return to the NHL this season, as he missed the cutoff date. The rules are different for Vasily Podkolzin, who will eventually sign an entry-level contract and is eligible to play in the NHL this season when his KHL season concludes.

So contract talks with the Canucks and Tryamkin can only be for 2021-22 and beyond. The big blueliner turns 27 years old this summer and, as Friedman notes, is eligible to become an unrestricted free agent in 2022.

A third-round pick by the Canucks during Jim Benning’s first draft as GM in 2014, Tryamkin played 79 games with the Canucks before bolting back to Russia when he became a restricted free agent in 2017.

Tryamkin had a good first season back in the KHL in 2017-18, scoring 25 points (9-16-25) in 51 games. He was named KHL Defenceman of the Month in October and November that season, and earned a spot in the KHL All-Star Game and on Team Russia at the IIHF World Championship.

Since that season though, the reviews have not been glowing. He was named to the 2019 KHL All-Star Game, but he has seen a significant drop in point production, notching 11 points in each of the 2018-19 and 2019-20 seasons, and 15 points this season.

Still, Tryamkin was counted on to play 20:59 per game this season, ranking second among defencemen on his team under former NHL coach Bill Peters. Tryamkin also led all Automobilist defencemen in hits (77) and blocked shots (122).

Many of the Canucks prospect experts, who have watched him closely over the years, are skeptical that Tryamkin can excel in the NHL. Hopes of him being a top-four defenceman are probably gone by now, but perhaps he can play on a bottom pairing. The smaller North American ice could be an advantage for him too.

Tryamkin clashed with then-head coach Willie Desjardins, but was a raw talent when we last saw him in Vancouver, and could skate well for his size.

The other question could be cap space, depending on what Tryamkin is willing to sign for. Prior to the pandemic, Tryamkin looked poised to return to the NHL, but the uncertainty of the 2020-21 NHL season forced him to stay in Russia another year longer.

In an interview with TSN 1040 last July, Tryamkin’s agent Todd Diamond said that he “couldn’t wait any longer” and that the “risk was too high for him.”

“Our intent all along was to return to Vancouver,” Diamond said. “But obviously with the pandemic and the delay in the season starting and also the delay in being able to discuss the 2021 contract with the Canucks, it just became too risky for Nikita if there was any further delay in NHL games.”

“As we’re watching the Stanley Cup playoffs and we’re seeing size and strength of St Louis’ defence, he could be a big part of our group and he’s a young player.”