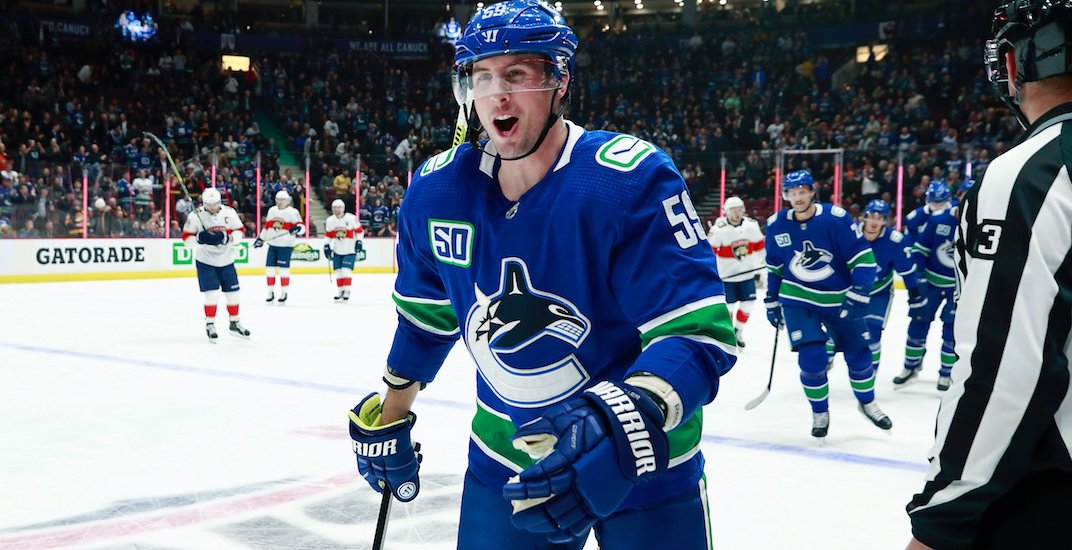 The hot start to the 2019-20 season from the Vancouver Canucks shouldn’t come as a huge surprise. Hot starts are nothing new for this team, even during some of their most recent down years. For the past two seasons, the Canucks have even temporarily held down a playoff spot late in November.

The @Canucks are the 10th team since 1989-90 to score at least 28 goals through their first five home games. #NHLStats pic.twitter.com/lfv8A6bHXV

However, the way they’re winning games feels different this time around, and some interesting revelations have contributed to their winning ways.

Here are six of the biggest surprises this season.

Kudos to Tim Schaller for turning around his NHL career, seemingly overnight.

It took the 28-year-old until Game 72 to score his first goal of the season last year. He would finish with three goals in 47 games.

Fast-forward to this season, and Schaller is tied for third with Brock Boeser on the team with four goals.

His shooting rate of 23.7% is unsustainable, but the fact that he’s shooting at a high rate is a recipe for more goals. Only Brandon Sutter and Josh Leivo are firing the puck on net more for the Canucks right now.

2. Their 4th line is actually good

Speaking of Schaller, the Canucks’ fourth line has looked downright impressive early in the season. Last season, the most commonly used fourth-line combo was Jay Beagle, Tyler Motte, and Loui Eriksson got dominated in terms of possession and contributed next to no offence.

Who knew all they needed to do was swap out Eriksson for Schaller?

Jokes aside, the trio of Schaller, Beagle, and Motte have been superb at even-strength for the Canucks. They’re controlling 60% of the shots on net when their on the ice together, which is insane for three players who battle against top lines every night.

Jim Benning’s bold decision to trade a first-round pick for J.T. Miller has paid off in the early going.

Miller is currently tied for 15th in NHL scoring with 13 points in 11 games. That’s tied with some players such as Aleksander Barov, Patrik Laine, and Brent Burns, among others.

His gaudy totals look even more impressive when you isolate them for even-strength production. He’s seventh in the NHL right now with 3.78 points-per 60 minutes. The fact that the Canucks control more than 65% of shot attempts when he’s on the ice makes his early domination look legitimate.

It’s evident that one of the biggest positives through the Canucks first handful of games has been the play of Quinn Hughes. The 20-year-old looks like he has all the tools to become a No. 1 defenceman in this league.

While his ascension to the first power play unit was well deserved, it’s surprising that Hughes has been one of the least productive even-strength players on the Canucks’ roster.

We call this, "The Quinn Hughes Show". Brock Boeser with the easy finish after the rookie breaks out for days. #Canucks pic.twitter.com/C7Y1UfRJH3

Although he leads the Canucks with five power play points, he only has two assists in 171 minutes at even-strength. That leaves him with the third-worst points-per-60 total at even-strength, trailing only Jay Beagle and Jordie Benn among the roster regulars.

Hughes is currently sixth on the Canucks in controlling shot attempts at five-on-five and spends more time with “The Lotto Line” than any other forward group. That’s all to say Hughes should probably find the scoresheet at even-strength more than he has in the early going of the season.

5. Tyler Myers fitting in great on the top pairing

The sample size is small, but Tyler Myers has absolutely looked the part of the top-pairing defenceman early in the season. Despite struggling in a top pairing role previously in his career, the combination of Myers and Alex Edler has been productive at both ends of the ice.

Myers had one bad giveaway in the second game of the season against Calgary that led to a goal against but since then, he’s been virtually flawless in his own end. The Canucks have controlled 55% of the goals and scoring chances at even-strength, despite Myers taking primarily defensive zone draws.

His early success looks sustainable, as long as he and Edler can both stay healthy.

Sure, goal differential can sway wildly from game to another, but on the surface, it shows that the Canucks are prolific on both offence and defence early in the season.

The @Canucks are the fourth team in the last 30 years to record multiple five-goal periods through their first 11 games. The others:

This team currently has a +15 goal differential through 11 games, tied with the Pittsburgh Penguins for second overall in the league, and it trails only the +16 Boston Bruins.

In all situations, the Canucks are fifth in the NHL with 3.56 goals per game and third with 2.31 goals against. They’re second with 60.6% goal differential, with only the Bruins being more prolific at both ends of the ice so far.

The two best teams in the league for goal differential in all situations last season were the Tampa Bay Lightning and the New York Islanders at 56%. The Canucks will fall back to Earth a bit at some point, but there are signs from their hot start that make this success seem sustainable. Only time will tell.