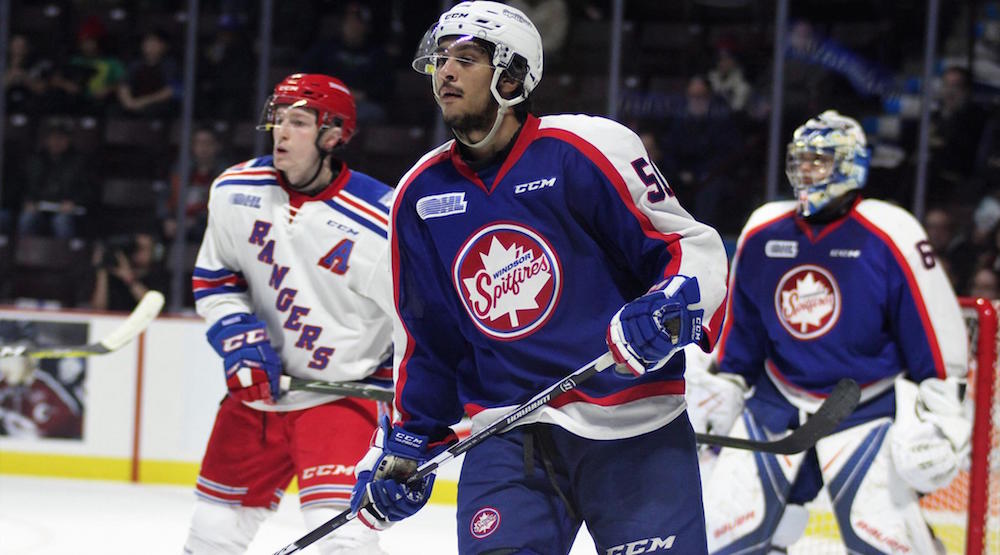 The Vancouver Canucks have inked another free agent out of junior hockey, signing 20-year-old defenceman Jalen Chatfield to a three-year entry-level contract.

Chatfield, who turns 21 in May, is an over-age player with the Windsor Spitfires of the OHL.

Earlier this month, Chatfield was named co-captain of his team, for which he has played the past three seasons for.

The Windsor @SpitsHockey name overagers Jeremiah Addison and Jalen Chatfield as Co-Captains for the rest of the #OHL season. @CTVWindsor pic.twitter.com/hOHSGNN5OC

“Jalen is a good two-way defenceman that sees the ice well and makes good decisions in all three zones,” said Canucks general manager Jim Benning. “He moves the puck well and can join the rush. Jalen is another addition to our young prospect pool and we look forward to his continued development playing in Windsor.”

Here’s the scouting report on Chatfield, courtesy of Tyler Parchem of Elite Prospects:

Chatfield is a prototypical two-way defenceman. He has average height but is slight in frame. He skates well, has a good stick, and makes a good first pass.

Chatfield has 28 points (8-20-28) in 60 games with Windsor this season, which is actually a slight step back statistically from his 19-year-old season where he put up 37 points in 68 games.

Chatfield is expected to join the Utica Comets next season, where the 6-foot-1, 187-pound defenceman will begin to try to prove he can play at the NHL level one day.