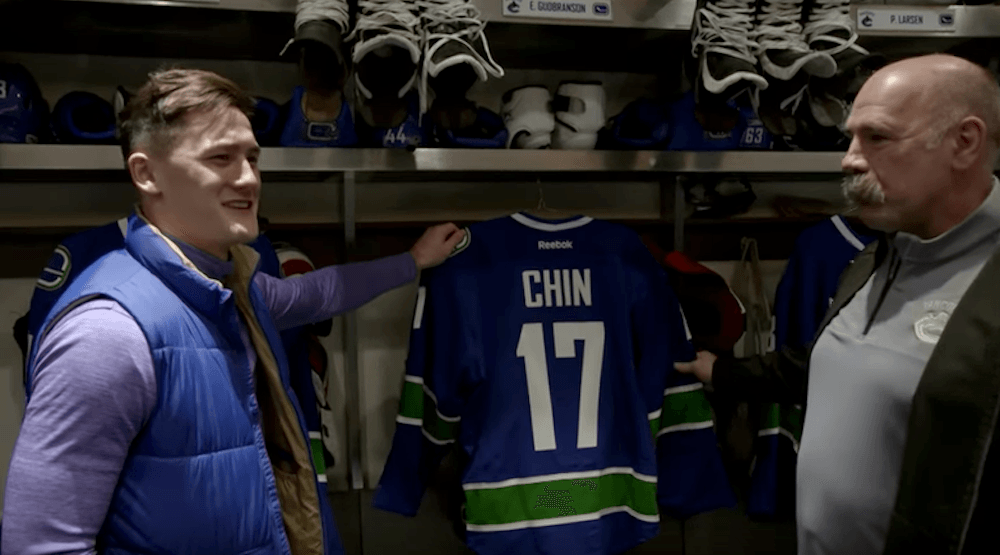 Chin, you might remember, caused quite the stir in Canucksland last week, with wild accusations of the drinking culture the team has. Among other things, Chin told an Irish newspaper about a practice called a ‘change-up,’ where players go out on the town to bust a slump.

“They send him out, drink 20 pints, go off with a couple of women, whatever he wants,” Chin said.

The accusations were so wild and unbelievable that… Well just that, nobody really believed them.

Chin has since back-peddled quicker than Chris Tanev defending a one-on-one with Connor McDavid.

“[Chin] accepts that what he said is not a true reflection of the culture of the Vancouver Canucks or its players and does not reflect what he witnessed during his time with the team,” a media release sent on his behalf from a PR company said.

Before you watch the full episode below, spoiler alert: he doesn’t go to the Roxy and down 20 pints with Henrik Sedin.

It’s a neat episode though, with Chin getting a fantasy camp-type experience that many fans would kill for.

An athlete in the Irish sport of hurling, Chin learned the sport of hockey while former Canucks goaltender Alex Auld tried his luck with the Faythe Harriers hurling team.

Auld, for his part, appeared to have a little bit easier time with hurling, given that it was played on a familiar surface. Before learning hockey, Chin had to learn how to skate.

Barely able to stand on skates at first, Chin stepped onto the ice with the Vancouver Giants to practice. He then got a grand tour from former Canucks Kirk McLean and Dave Babych.

Babych was described in the episode as a mentor to Chin, as they watched the Canucks play the San Jose Sharks from the alumni suite at Rogers Arena.

Chin also got the game explained to him by injured Canucks defenceman Erik Gudbranson.

Also part of the experience for Chin, who was presented with a a customized Canucks jersey, was a power skating lesson from Derek Popke, a session on the ice with development coach Manny Malhotra, and pond hockey at Grouse Mountain with Kyle Wellwood.

Most of Chin’s experiences appeared to be with the Canucks alumni team (which includes the likes of McLean, Babych, Wellwood, Cliff Ronning, and Jyrki Lumme), working his way towards an appearance in the alumni game in front of fans at Rogers Arena before the annual SuperSkills event.

The only appearance of widespread drinking in the episode appeared after the alumni game, with players enjoying a beer in the dressing room (which common practice in amateur men’s leagues across the country).

Chin did go to the Farmer’s Apprentice with Gudbranson one evening, although the most provocative part shown was Gudbranson’s surprise that Chin did not get paid to play his sport.

“He couldn’t get over the fact that we were amateur and there’s so much time and commitment that goes into what we do,” Chin told the camera.

Here’s the full episode of the March 10th edition of The Toughest Trade: