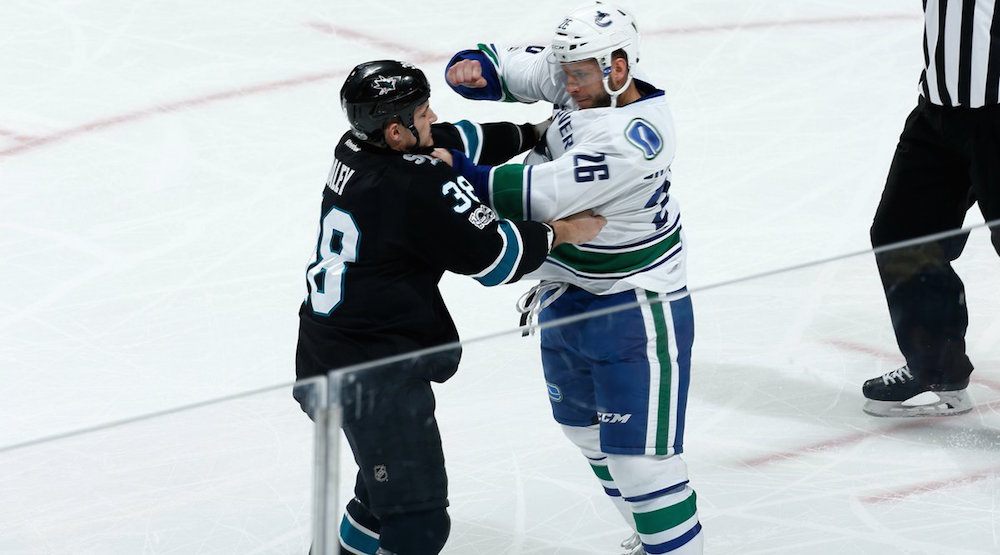 Get used to it, Canucks fans.

After trading Jannik Hansen and Alex Burrows (who scored twice in a great debut as an Ottawa Senator by the way), the Canucks forward depth went from thin to thinner.

Seriously though, Burrows had two goals for Ottawa on Thursday…

Alex Burrows scores in his first game as an Ottawa Senator, and his parents are loving it. #Sens pic.twitter.com/WPjIghv1c9

On Thursday against the San Jose Sharks, the Canucks were outplayed in every sense of the word. Despite Ryan Miller standing on his head, the Canucks generated no offence at even strength, which is a great recipe for a loss.

Even with Sven Baertschi back in the lineup, the Canucks forward lines still feature more than a few players who wouldn’t look out of place in the AHL.

The 3-1 defeat ends the six-game winning streak they somehow had at the SAP Center.

1. Hansen has to wait

Having traded Hansen to the Sharks on Tuesday, it looked like the Canucks might match up against the honey badger tonight.

Hansen won't be playing against Canucks Thursday. Says he needs US work visa. Also needs a passport for his baby to travel.

We’ll have to wait a month before Hansen and the Sharks take on the Canucks next.

It was also thought that maybe Nikolay Goldobin (the return in the Hansen trade) would play against his former team tonight, but he too was not in the lineup.

He did go out for dinner with fellow countryman Nikita Tryamkin though.

Tryamkin didn't travel with #canucks to SJ but he did take Goldobin out for dinner in Vancouver last night.

The Canucks may now be without Hansen and Alex Burrows, but they still have Bo Horvat, and sometimes that’s all you need.

It’s nice to have a constant bright spot like Horvat in the lineup.

When the Sedins are slow and turning over the puck, at least there’s Bo Horvat.

When Willie decides to put Megna on the power play, at least there’s Bo Horvat.

When Loui Eriksson has one point in his last 17 games… okay this one is just awful.

Having learned their painful lesson from last season’s trade deadline, the Canucks got the deals they needed to make done early.

They did make one move on deadline day though, picking up Joseph Cramarossa off waivers from Anaheim. Probably not a bad idea considering the team’s forward depth.

Playing on the fourth line with Mike Chaput and Reid Boucher, Cramarossa did probably the only thing he could do in this situation.

It was a short, but good tilt with Sharks tough guy Micheal Haley. Cramarossa appeared to get the worst of it though, going to the dressing room for repairs before returning.

Not too sure what else Cramarossa is going to bring to this team, but it’s good to see some fisticuffs once in a while. It’s something we haven’t seen as much of with Derek Dorsett out all season.

He had a pretty care-free take on his bout post-game.

4. Miller is the anti-tank

When the Canucks decided (correctly) to be sellers at the deadline, it signalled a shift in focus to next season. A focus on the future.

What’s best for the future is a top draft pick, preferably Nolan Patrick or Nico Hischier. The best chance at that is with a bottom-3 finish. Though many don’t like the term, ‘tanking’ may be what’s best for the Canucks.

Which brings us to Ryan Miller. He’s held this team in games they’ve had no business being in many times this season. Tonight felt like one of those games.

It was a 3-1 loss, but it could’ve been much worse had Miller not been on his game. He made 30 stops, including a Chris Tierney penalty shot.

I made a gif of the penalty shot just so I could beat @ryanbiech to it. pic.twitter.com/M3mCG1fDU5

Miller was especially strong in the third to hold the Canucks in it, but the team generated just five shots in the third, which doesn’t make for good odds when you need two goals.

"Decent 1st period, flat 2nd and we didn't have much in the 3rd. Millsy was great and we weren't good enough in front of him." – Horvat

With playoffs no longer a realistic possibility, I can’t help but fear Miller will steal a handful of points for the Canucks, sinking their chances at a top pick.

Also, it would be nice to get Jacob Markstrom some more starts.

This game was pretty boring from a Canucks standpoint after the first period, but what was interesting was a couple of sections from Elliotte Friedman’s “30 Thoughts”.

1. One year ago, Trevor Linden was a frustrated man. The Canucks’ president of hockey operations saw his organization come under tremendous heat for trade deadline inactivity. This year? “Very different,” he said Wednesday. “Much better feeling.” He admitted the last couple of weeks were strange for him. “We are undergoing a significant transformation. I remember being in the dressing room when Alex Burrows walked in for his first regular-season game.” The best thing you can have is volume. Not all of your picks/prospects are going to work out. But the more you stockpile, the more of a chance you have.

Particularly revealing are some of the Trevor Linden quotes that really highlight the different approach management seems to be taking.

2. Did the Canucks — at their recent organizational meetings in Pittsburgh — ever consider trading Alexander Edler and/or Chris Tanev? “Those were great conversations,” Linden answered. “We considered all our options, looked at everything we could, put everything on the table. At the end of the day, with the youth we have on our defence, we decided we must have people who can steady the ship. We placed a high priority on that. Don’t put players into situations they are not ready for.” That’s a reason they are considering keeping Ryan Miller. They want the best possible goaltending behind them.

3. Linden added no one should expect Vancouver to be a significant player in free agency. “Loui (Eriksson) was a unique opportunity. His relationship with Daniel and Henrik…through the Olympics in 2010 he knew and liked the city. I don’t think that’s the way build this team now. We’re more in the market for ‘bridge’ support, shorter term.” 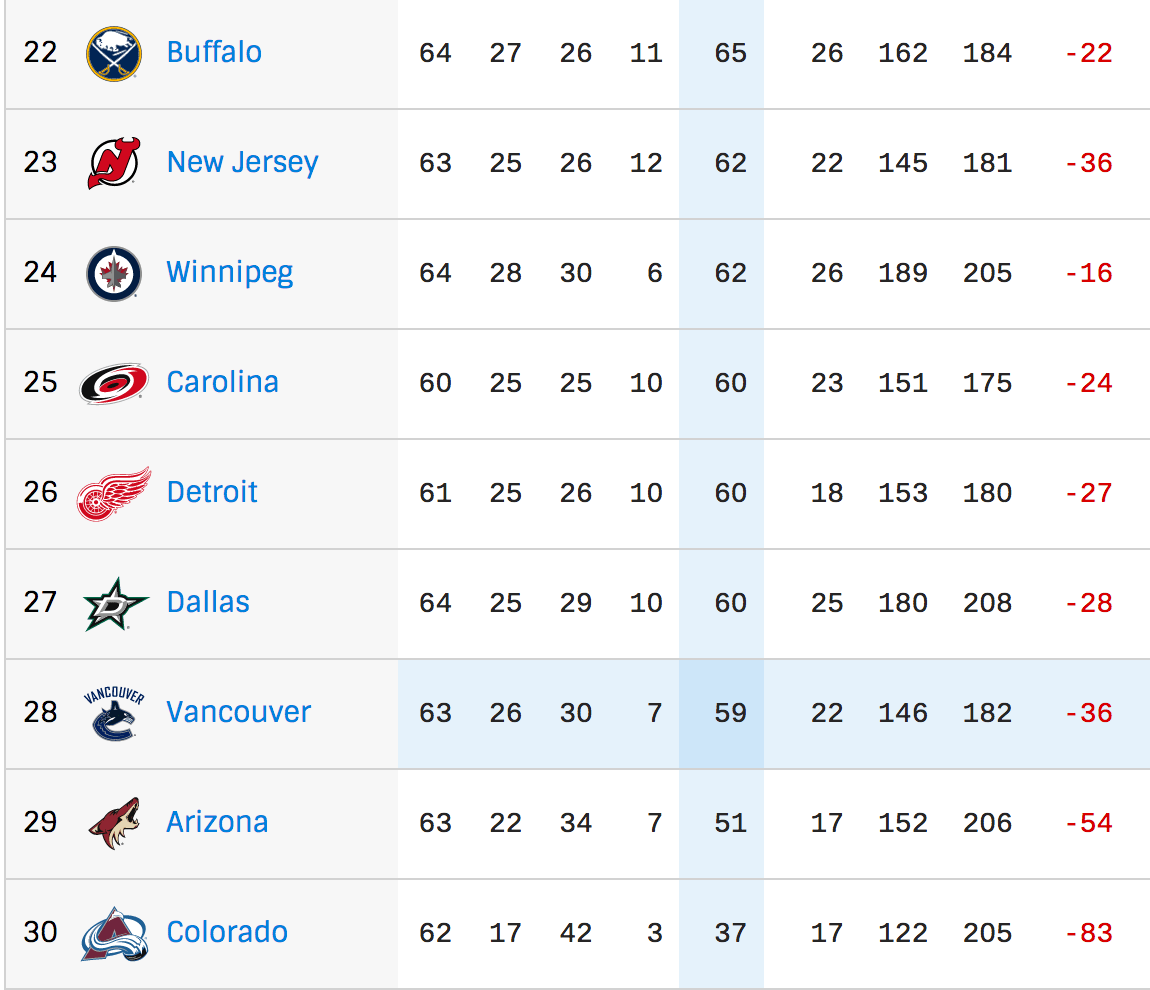 If you’re embracing ‘team tank’, you have to be pleased with where the Canucks sit in the NHL’s standings.

Had the Canucks won tonight, they would’ve moved ahead of Dallas, Detroit, and Carolina.

Instead, they remain 28th in the league, now in the final 20 games of the season.

With the Canucks tough schedule ahead, it’s still possible the Arizona Coyotes could surpass them, but the most likely scenario has the Canucks finishing in the 26-28 range when the season comes to a close.

Speaking of tough schedule, the Canucks next test is a back-to-back on the road this weekend, LA on Saturday, Anaheim on Sunday.