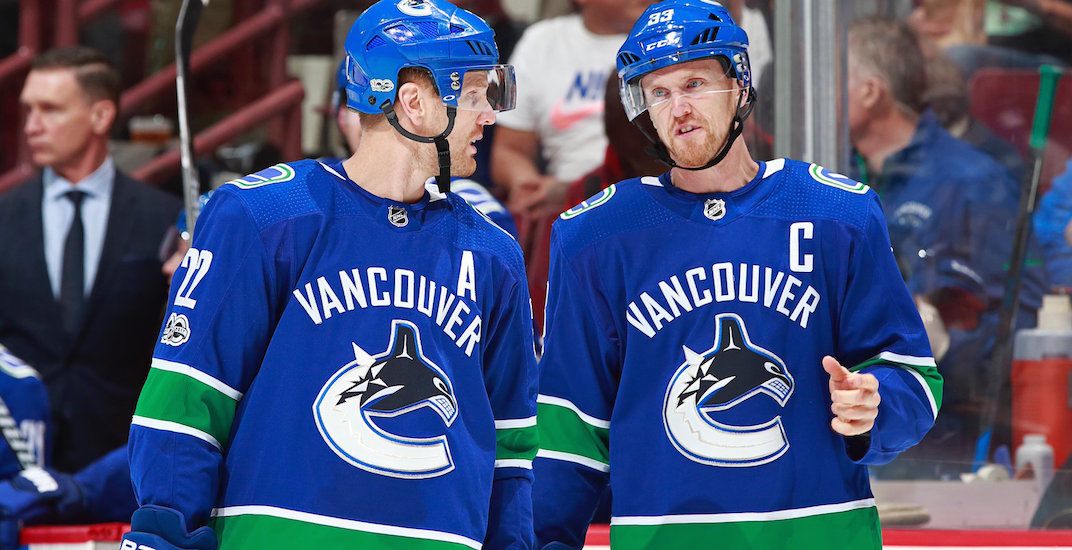 So the Canucks are winning games you didn’t expect them to, they’re scoring more goals than anyone thought they could, and so far, they’ve looked… competitive.

That’s a huge step forward from where they were last season.

There is one area they’ve been consistently inconsistent, however, and that’s with the man advantage.

While it’s looked decent and even deadly sometimes, Vancouver’s power play has had stretches of games where they can’t gain the offensive zone, and others where it doesn’t generate a single shot.

Eleven games into the season, their power play is clicking at 14.8 percent – ranked 25th in the NHL.

Now, while every Canucks fan is excited to see the Sedins’ playing less as the youth takes over, this is one spot their minutes should not be appropriated.

They haven’t been yet: the Sedins are still playing more on the man advantage than any of their teammates. The problem is their efforts are not being maximized.

Let’s start with the general premise that loading up one power play unit with the team’s best talent is the way to go.

Basically, you have a limited amount of time with the extra man on the ice and the aim is to score a goal, not kill time. So load up one unit, give that line the lion’s share of power-play time, and you give yourself the best chance at putting the puck in the net.

I could spend hours putting together graphs and charts that show this is what the best teams do, but do I need to?

During the glory days of the Canucks this is exactly what they did, with Ryan Kesler, the Sedins, and Christian Ehrhoff the keys to one of the most lethal power plays in the NHL.

What I will do is show current Canucks skaters’ shot attempt differentials (even strength) and Corsi-relative scores. 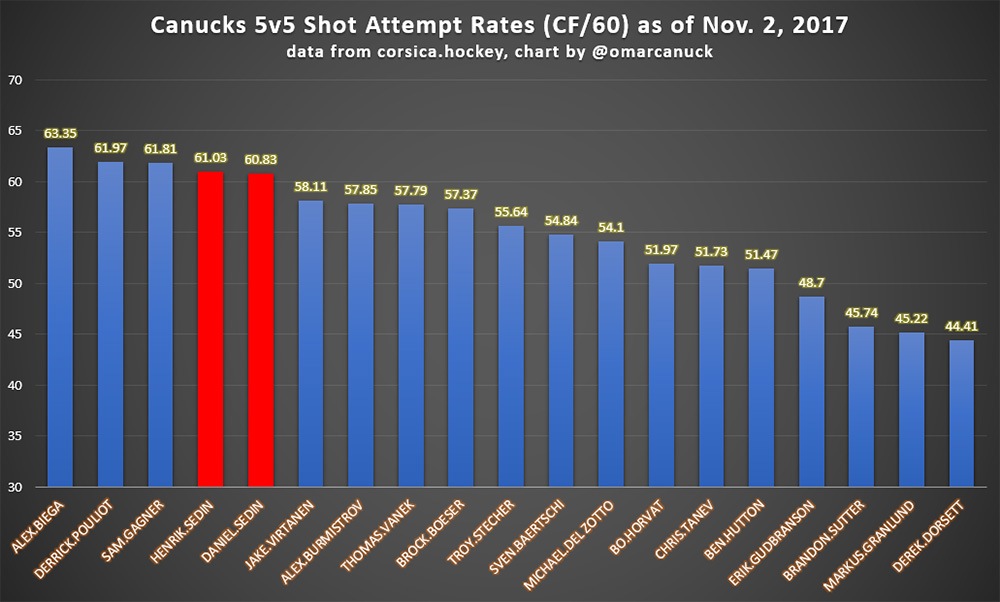 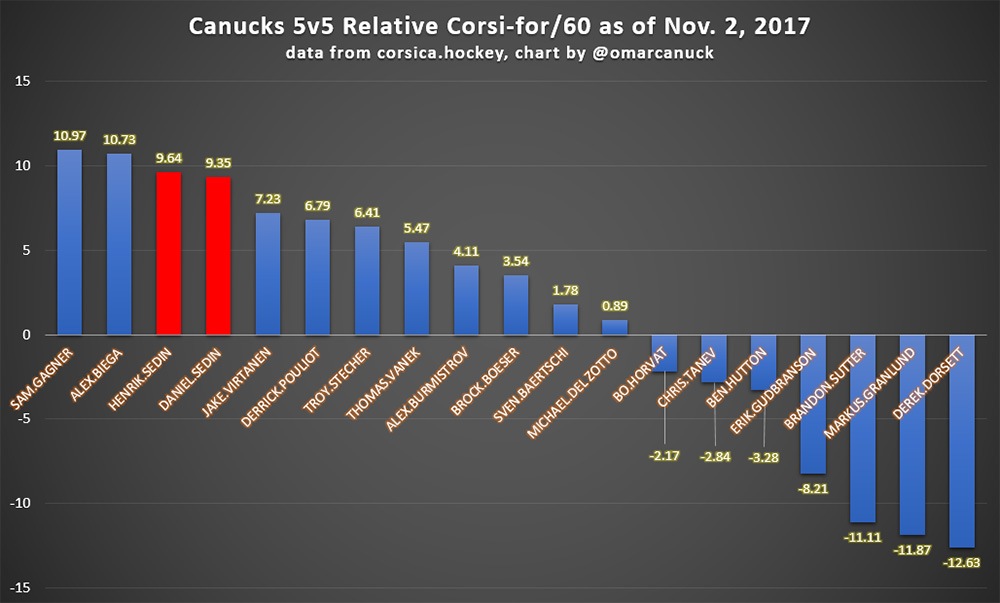 Note: Corsi-relative is a comparison of how a team fares with a player on the ice versus how it does with him on the bench. The more positive, the better.

What these graphs tell us is all else being equal (meaning defensive partners and linemates) the Sedins are showing they’re still two of the best offensive weapons the team has. Whoever they play with at even strength, they consistently create shots and scoring chances at the offensive end, even at the age of 37.

This may be despite or because of the limited minutes. Either way, they still have it.

Meanwhile, on the power play, their numbers are much less impressive. 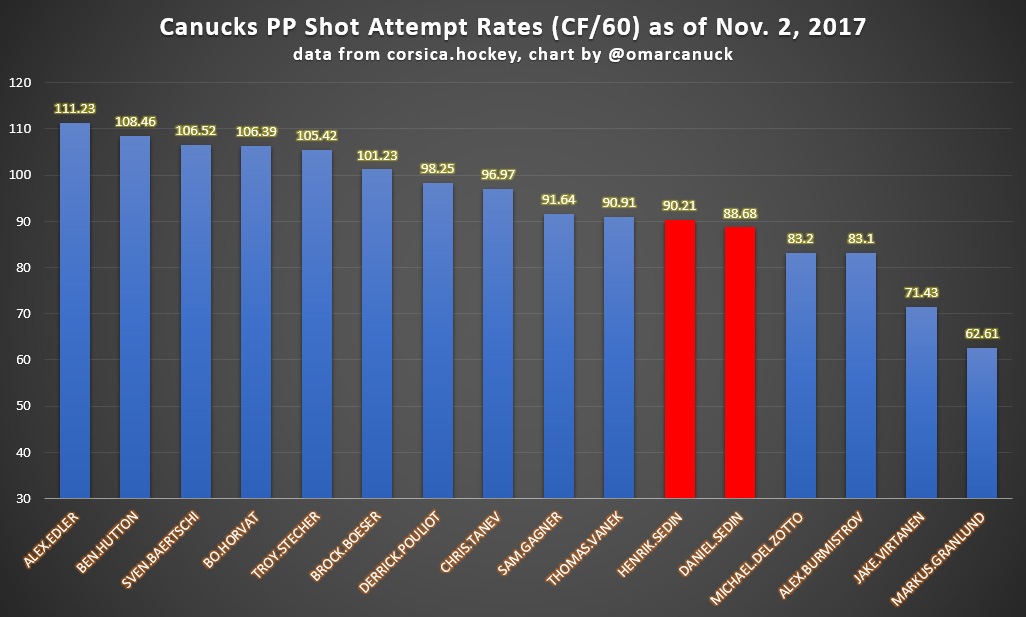 You have to wonder what’s happening here. When the Sedins have an extra man are they losing their offensive touch? That doesn’t make sense.

To me it’s obvious – the three players meant to compliment them on the power play are doing just the opposite.

There aren’t many who would argue the Sedins are not still Vancouver’s two best passers (though you may find some/one person who would say they’re not superstars…), and any decent power play must have great puck movement.

What’s missing is the finish. Their shooters need shots that back defenders off and put goalies off balance – like Salo and Ehrhoff used to do.

Here’s a diagram of how the Sedin unit is currently set up: 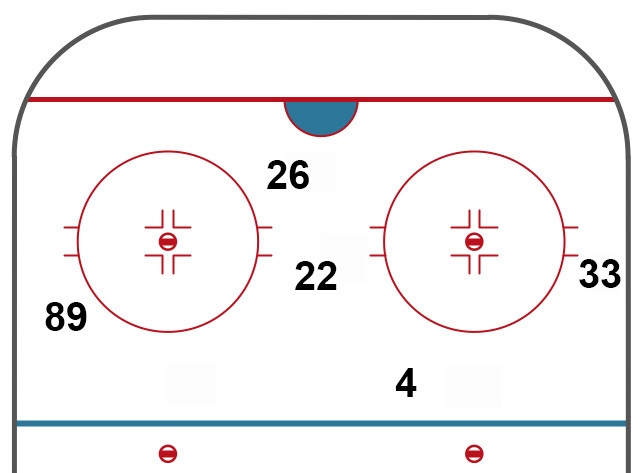 The line has one right handed shot, and that’s Gagner (89) on the left side. Defenceman Michael Del Zotto (4) plays the point, while Thomas Vanek (26) is the net-front presence.

The most obvious first step is an easy one: putting Brock Boeser’s shot on the end of those saucer passes would lead to more goals instantly. That’s a no-brainer.

Then you look at the other two spots.

If it were me, and I was looking at the lineup as it currently is with injuries taken into account, this would be the group I’d try first: 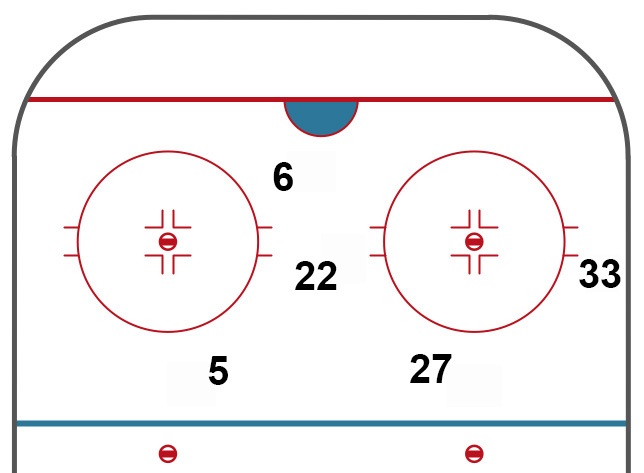 The guys playing the point here are Derrick Pouliot (5) and Ben Hutton (27). On Tuesday, Daniel Wagner of Pass it to Bulis wrote about the gaudy shot attempt numbers they’re putting up on the power play. Together, their CF/60 on the power play is now 122.25. To put that in perspective, if Vancouver always put up shots at that rate with the man advantage, their CF/60 would be ranked fourth in the league.

Now, there’s still only one right handed shot here in Boeser (6), so once Troy Stecher returns I’d consider switching out one of Pouliot and Hutton for him.

Of course, none of this solves one of the power play’s biggest issues – getting the puck into the zone and setting up. That’s under assistant coach Newell Brown, and hopefully he comes up with some solutions for that soon.

Again, the point of all this is the Sedins haven’t lost their offensive abilities and vision. They just need a finisher. Over the years they’ve had Anson Carter, Alex Burrows, and Jannik Hansen do a great job of helping them with that. On the power play Ehrhoff, Kesler, and Salo come to mind as their most prolific finishers.

It’s time get back to stacking their unit with talent and watching the results unfold.