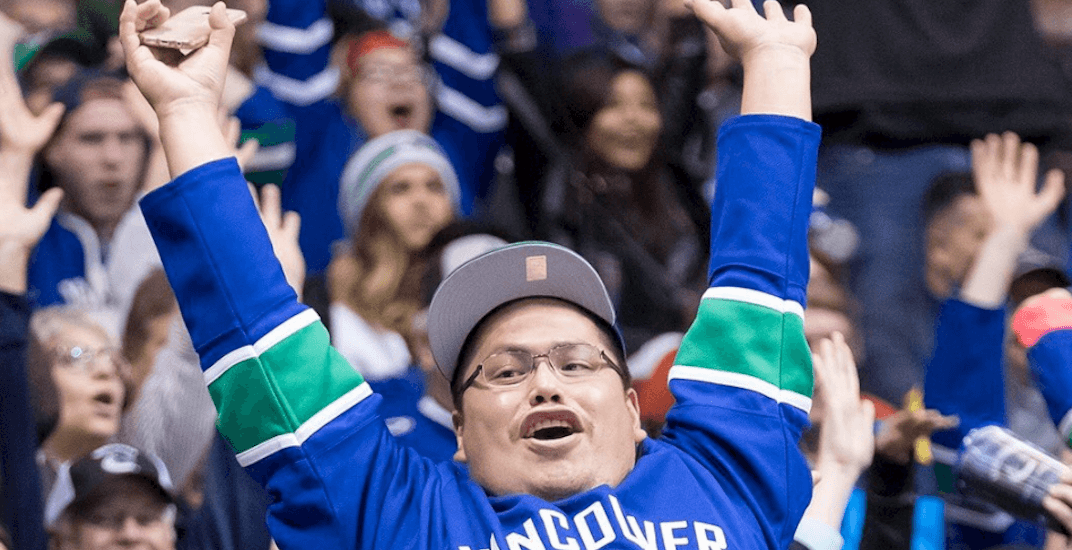 It’s one of the most divisive issues among hockey fans.

For some, it’s something they wait for all game. For others, it’s a source of resentment and discontent.

I’m talking about the wave.

You know it, you love it, you hate it.

Canucks fans at Rogers Arena have been a source of ridicule for some, pointing to the indifference and silent nature of the fanbase over the past number of years. While that’s beginning to change *ahem, the Larscheiders, ahem* the wave seemed to survive it all.

Many fans couldn’t be bothered to get out of their seat when the Canucks scored a goal late last season, but remarkably, the wave survived.

Not everyone is happy about it.

Social media is abuzz nearly every time fans dare start the wave. And let me tell you, the internet can be a cruel and unforgiving place.

With the Canucks trailing 1-0 in the second period against the New Jersey Devils on Wednesday, it started…

There is never a good time for the wave

The Canucks were playing well, but they were losing. Is that a time to do the wave?

Origins of the wave

Where and how the wave was invented is in dispute, but there are some strong ties to the West Coast and Vancouver in particular. There’s even a claim that the wave began at Empire Field in Vancouver at a Whitecaps game in the 1970s.

In England, the wave is referred to as the Mexican wave after it was first introduced to a global audience at the 1986 World Cup in Mexico.

Krazy George, a professional cheerleader for many different pro sports teams – including the BC Lions – says he invented the wave at an Oakland Athletics playoff game in 1981. That claim has been disputed by some who say the wave started in Seattle at a Washington Huskies game the same year.

Is the wave a random piece of happenstance or a way to express joy? Or is it a way to cheer on your team?

Again – nobody can agree on this.

For those that believe it’s a way to express joy – which includes yours truly – they are appalled at the sight of the wave when the home team is losing. If your team is losing, you should be trying to encourage them and motivate them to play better, not expressing joy with a care-free wave.

If you view the wave as a way to cheer on your team or as something fans do to entertain themselves, then you probably don’t get why anyone would be bothered. And judging by the frequency of the wave at Rogers Arena – even when the home team is losing – I’m in the minority on this subject.

Here’s a bunch of Canucks fans doing the wave last year, with the Senators up 2-0 on Vancouver:

The Canucks ended up losing the game 3-0, managing just 22 shots on goal.

What the people say

Longtime Canucks fan Jared Kerr is a fan of noise and feels like people should start the wave whenever they damn well please.

“Considering the attendance and how quiet Rogers Arena is, I am all for any fan noise,” says Kerr.

“I’m mostly neutral on the wave,” says Dave Shepherd, another longtime fan. “I don’t see a downside to it.”

“Fans should do the wave whenever they want. Given that the team has been pretty mediocre the last couple years, people can find enjoyment how they please. It’s not hurting anyone.”

You know who it is hurting? Fans like my friend Carlo Bodrogi, co-founder of the Larscheiders supporters group.

“You don’t high five your buddies when it’s a tie game or when the opposing team scores, right? So why would fans do the wave unless their team is winning big?”

Carlo is more against the wave than anyone I know. He believes it should be reserved for blowouts, as a way to celebrate a game when the result is a foregone conclusion.

“Doing the wave in a tight game spits in the eye of the hockey gods. Doing the wave when your team is losing confirms that you’re not even paying attention to what’s going on on the ice.”

I started the wave, once.

It was a late-season game against the Calgary Flames at Rogers Arena (then known as General Motors Place). The Canucks were on their way to their worst season in 10 years, and would finish third-last in the NHL standings.

I was 16 years old at the time so I had only had my heart broken by the Canucks a handful of times in my life. I was full of energy, and so was the large group of friends I was there with.

With the score 0-0 early in the first period, a few wave attempts started around the arena. It was a fruitless endeavour.

Then, Pavel Bure scored his 50th goal of the season. During the next stoppage in play, we got the wave going.

Appropriate time for the wave

We’re not all going to agree on this, but I can stomach the wave in a tie game, provided the home team has not just blown a lead.

People are happy, there’s a bit of coordination, it’s kind of cool I guess.

Otherwise, figure out a way to make noise in another way.

What do you think?