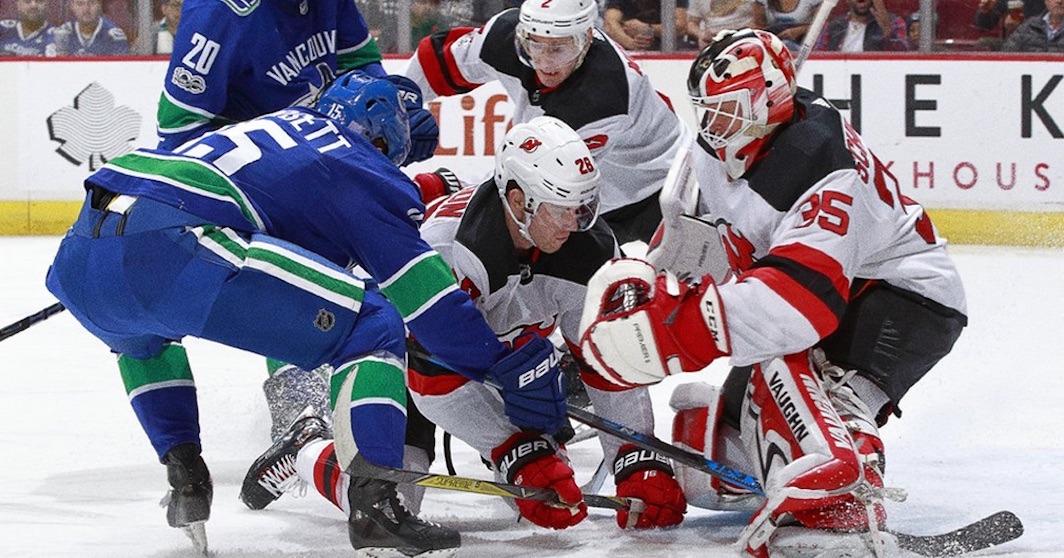 So who won the Horvat-Schneider trade?

With the New Jersey Devils in town, most of the pre-game talk in Vancouver was based around that memorable trade back at the 2013 NHL Draft.

“We have a trade to announce.”

Four years later, and we’re still talking about it. We probably still will be four years from now too. That’s just how fans and media work.

But on Wednesday, there was no doubt which of Horvat or Schneider came out on top.

With the spotlight on him, Cory Schneider stole the show against his former team with 37 saves in a 2-0 shutout.

At least in this game, the Canucks lost the trade.

Is it wrong to make the SixPack Superstar a player from the other team? I don’t care, it would feel wrong to give it to anyone other than the former Canucks goaltender after that performance.

The Canucks were the better team on Wednesday and tried everything they could, but Schneider was equal to the test every time.

It was the topic swirling around Vancouver prior to Wednesday’s tilt between the Canucks and Devils. Rightfully so – it was a trade that greatly altered the futures of both franchises.

Rob Williams did a great piece breaking down the trade, and made the call to declare the Canucks the winners.

Gutsy call Rob. Not because I disagree, but because declaring anything even the slightest bit controversial in this market can get people into a frenzy.

Oh, and of course, the timing could have been better.

Schneider's gonna get a shutout to make my article look bad, isn't he? So selfish.

Many were quick to offer their own opinions on the trade.

Schneider trade worked out in their favour, doesn't change the fact they let him go below market value with better offers in the table.

absolutely not we lost worst trade in Canucks history! should of kept Schneider

Counterpoint: the Devils got the better player, regardless of wether they should have made the trade. I think that’s enough to say they won the trade, personally.

It’s certainly fair to say the Canucks didn’t get the best value at the time of the trade, but looking back, how many would trade Horvat for Schneider now? I would guess not many. It all comes down to how you view it.

In other words, we’re all winners!

Well it was only one game, but it felt like forever.

Let’s just say when it’s Jayson Megna in the lineup instead of Brock Boeser – people notice.

Going from watching Boeser play to watching Jayson Megna play is the equivalent of following a delicious steak dinner by eating the napkin.

No offense to Megna, but Canucks fans saw enough of him last season. Right now Boeser is the main attraction to the Canucks – much like the Coaster to Playland.

Canucks fans want to see this.

Didn’t get the shot that he wanted, but man what a crafty move to get in tight like that.

He may have only allowed one goal, but it was another softie for Jacob Markstrom.

It’s been a running theme with the 27-year-old goalie for a while now. He’ll make some huge saves, but then let in a weak goal that deflates the team.

Tonight, it was a knuckle puck from Jimmy Hayes that snuck under the arm of Markstrom.

Looks like it might have tipped slightly on the way through, but that’s one Markstrom has to save, and he knew it.

It looks even worse in hindsight since it ended up being the only goal scored (until the empty netter).

There may not have been any goals for the Canucks tonight, but the Sedins looked like they could have two or three themselves.

They had some great shifts on the night, but I love this one.

You know it’s a great Sedin shift when it won’t even all fit in one GIF.

One word to describe that shift? Exciting! (Sorry Jawn)

Seriously though, how can you not love watching the Sedins pass circles around people?

Ice time was up for the twins tonight – they hovered around the 17 minute mark for the first time since the third game of the season. You have to think Green liked what he saw.

6. What could have been

The Canucks really did deserve a better fate tonight. You might see the whole “can’t score” narrative popping up now but really, the Canucks had plenty of opportunities in the last two games. Sometimes the bounces just don’t come.

They’re far from an unstoppable juggernaut, although there was this tidbit from Ken Hitchcock.

It really does feel like a new team with Travis Green behind the bench.