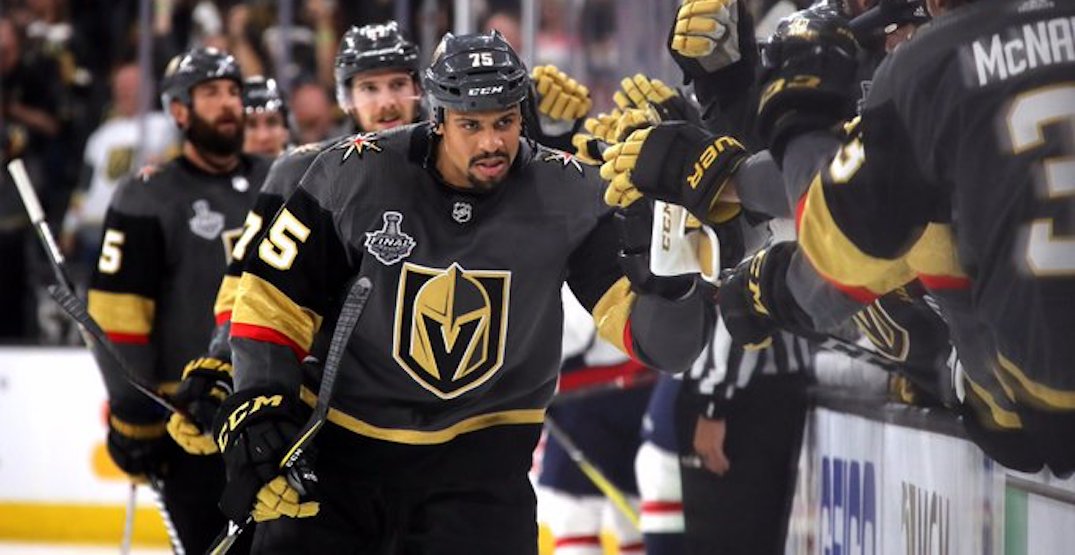 Game 1 against the Vegas Golden Knights didn’t exactly go the way the Vancouver Canucks wanted it to.

Trounced to the tune of 5-0, Vancouver never really looked like they were close to playing on the same level as the NHL’s second newest team. Bo Horvat’s line lost ground to William Karlsson’s trio, Elias Pettersson was just at the water line against Paul Stastny’s group, and the Jay Beagle-led fourth line got squashed by Nicholas Roy’s line.

In fact, each line struggled to get the better of their primary matchup, with the exception of Brandon Sutter’s group against Chandler Stephenson’s line.

That may come as a surprise, because the Brandon Sutter/Stephenson matchup was the stage for Antoine Roussel vs. Ryan Reaves. If you had the sound on for the TV broadcast last night, you’d have been treated to the Life and Times of Reaves: a story of how the big man trolled Roussel and physical’d the Canucks into submission en route to the Golden Knights’ decisive victory.

So much air time was spent on Reaves and his in-game rivalry with Roussel that you’d think he hardly left the ice all night. Rather, he played just under 15 minutes — 14:49 to be precise, with all but three seconds of that time coming at 5-on-5.

Roussel is given a 10min misconduct for… hugging? 🤗🤣#NHLonSN pic.twitter.com/2RGEFuqp5I

Reaves totalled a whopping 11 hits over the course of the night and attempted to goad Roussel into a fight more than once. The broadcast noted that the two were “in different weight classes” (Reaves tips the scales at 225 pounds compared to Roussel’s 199 pounds) and went as far as mentioning that the only Canuck heavyweight is Zack MacEwen, who has been scratched the last three games in favour of Adam Gaudette.

The broadcast stopped short of saying that Canucks coach Travis Green needs to dress MacEwen in order to set Reaves straight, but the implication was clearly there: the Canucks needed to find a way to deal with Reaves.

Except, that isn’t really true.

What the broadcast failed to mention with all their fawning over the physicality is that the Canucks out-attempted the Golden Knights 7-1 while both Roussel and Reaves were on the ice (accounting for more than five minutes of ice time), as well as out-shooting the Knights 3-0 and out-chancing them 3-1.

The Canucks don’t need to find a way to deal with Reaves — if anything, they need him to be on the ice more.

Reaves may be imposing, and, if left completely unchecked, he might end up injuring one of the Canucks skilled players. But the answer to the Reaves “problem” isn’t to dress a fighter to “keep Reaves honest”, as they say; it’s to let Roussel and his linemates continue to do what they’re doing  — keep Reaves occupied, and keep the ice tipped in Vancouver’s favour when they share that ice.

That’s a matchup the Canucks can easily win.

The Canucks coaching staff has far more pressing challenges to deal with. The Golden Knights are certainly a physical bunch, but moreover they play with a degree of speed that gave the Canucks defence absolute fits. With the exception of Quinn Hughes, Vancouver’s defence corps was simply not quick enough to turn the puck up ice against Vegas’ forecheck, and even Hughes was being hounded to a degree that he simply isn’t used to dealing with.

Vegas’ backchecking and neutral zone defence was so voracious that the Canucks frequently resorted to dumping the puck in — a method doomed to yield diminishing returns given that the Canucks are a rush offence team that struggles at generating off the forecheck.

what are they going to do about Ry–

what are they going to do about Ryan —

what are they going to do about Ryan Rea–

what are they going to do about Ryan Reaves

Amusingly enough, those skilled Golden Knights gave credit to Reaves after the game, having a laugh at Roussel’s antics.

“I don’t think he’s really distracted anyone but himself,” claimed Reilly Smith, one of Vegas’ five goal scorers. “If that’s the way he wants to play the remainder of the series, I think he just hurts his own team.”

It’s no surprise that the victors would choose to frame this particular subplot in such a favourable light. Hockey, especially playoff hockey, is chock full of cliches, narratives, and gamesmanship. It’s easy for the Knights to laugh off Roussel when they utterly dominated Vancouver’s top six and came away with such a decisive victory. But it’s an inaccurate description of what actually happened. What the Canucks really need is for their other line matchups to go the same way Roussel vs. Reaves did.

“I don’t think it was a factor one way or the other to be honest,” Green said of the Reaves-Roussel narrative during a media availability on Monday morning. “I know the media made a lot out of it, but on the ice, during the game, I don’t think it was really it was any factor. I don’t think either player decided the outcome of the game.”

Given what we witnessed in Game 1, you’d be forgiven for fearing that this won’t be a long series, but assuming that the Canucks want to take at least a game or two off Vegas in the process, they’re going to have to make some adjustments. Many of the Golden Knights are going to require special consideration going forward — but Reaves isn’t one of them.

The Golden Knights can say what they want, and the Sportsnet broadcast can fawn over Reaves’ physicality to their hearts’ content, but the Canucks coaching staff can’t lose sight of where the battle is truly being lost.