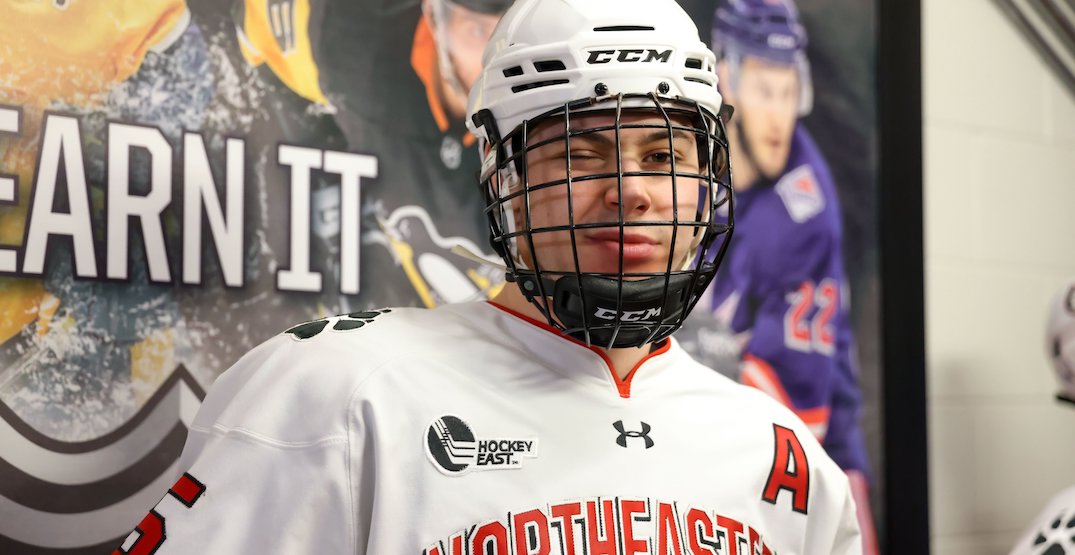 Aidan McDonough wants to go back to school to get his degree, captain the team, and settle all NCAA accounts.

I applaud his devotion to scholastics and the Northeastern program.

But it means the Vancouver Canucks have to trade him.

Don’t get me wrong, I don’t want to see the Canucks trading out good young prospects, especially burgeoning power forwards who score goals. But they have to protect the asset and can’t get caught out leaking value on this player.

Aidan McDonough (#Canucks) with a huge open ice hit to try and get @GoNUmhockey going. pic.twitter.com/sw3hzfORYZ

Injury or a poor season would diminish his market, but the bigger concern is that he doesn’t sign with the Canucks at the end of Northeastern’s season and pursues unrestricted free agency in the summer, which four-year NCAA players are allowed to do by NHL rules.

He’s a Boston-area kid. There was static between the Canucks dressing room and their last Northeastern player, Adam Gaudette, and this new Canucks regime did not draft him, nor has anyone in Canucks colours developed him.

What! A! Goal! Aidan McDonough (#Canucks) dekes past the Western Michigan defender, drives the net, and buries the puck to tie this game at 1-1 for @GoNUmhockey.

The team has many needs, including getting younger on defence and clearing out cap space. McDonough can help them do that this summer when Jim Rutherford and his team get to work.