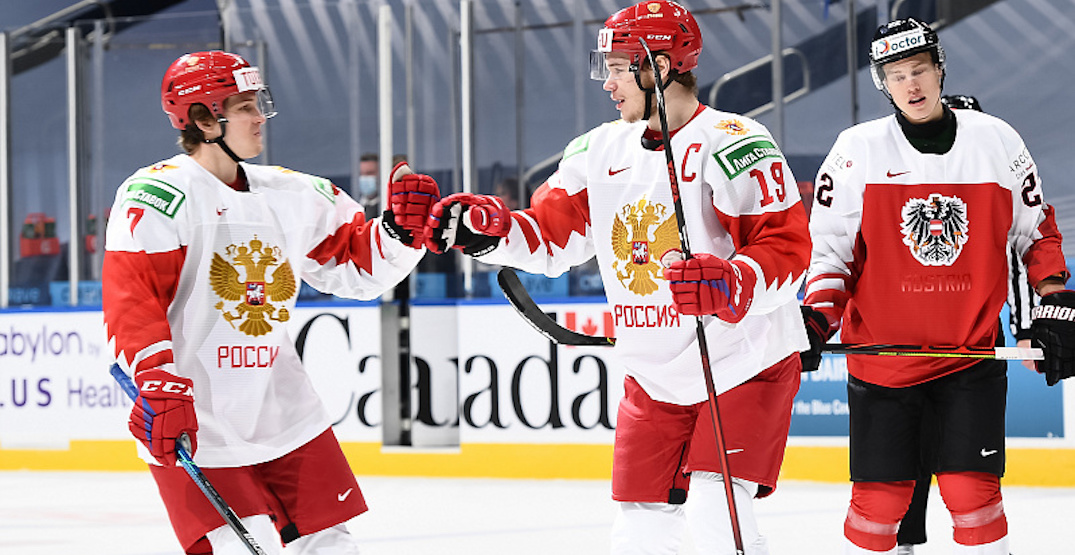 With no points and his team coming off a disappointing loss to the Czech Republic, the pressure was on Vasily Podkolzin to produce.

Drafted by the Canucks 10th overall at the NHL Draft in Vancouver last year, Podkolzin is a complete player. The 19-year-old winger plays the power play and penalty kill, and is the prototypical 200-foot player.

But at some point, he has to produce offence.

Unfortunately for him, like many young Russian players, he isn’t put into a position to succeed with his KHL team. Ice time is given to him sparingly, contributing to an unimpressive stat line with SKA St. Petersburg this season: 24 games, two goals, four assists, and six points.

But talk to the people that have watched him play, particularly at levels where he is given a chance to play a regular shift, and they’ll tell you there’s reason to be excited about Podkolzin.

On Tuesday at the World Juniors in Edmonton, he gave fans a glimpse of what he’s capable of.

Podkolzin’s critics will point out that his big night came against a bottom-feeder in Austria, and that’s true. But you can only play the teams on your schedule, and the Canucks prospect lit up the Austrians.

He was named Russia’s player of the game, and ended the game with two goals, an assist, and five shots on net in 14:11 of ice time. But those numbers don’t tell the whole story, as Podkolzin was even better than that stat line suggests, setting up teammates all night with brilliant passes.

Let’s take a look at his incredible game.

Podkolzin scored his first goal 6:11 into the game, ripping home a wicked wrist shot from inside of the right circle.

Less than eight minutes later, Podkolzin made the score 3-0, showing off his great hands in front of the net. He collected the puck in front of the Austrian goaltender before quickly getting it onto his forehand and into the net.

Second 🚨GOAL🚨 of the period for Vasili Podkolzin! pic.twitter.com/mJhPP35UST

With a bit of luck, Podkolzin would have had a natural hat trick before the period was over. Instead, he had to settle for the assist on this goal, after teammate Marat Khushnutdinov poked the puck over the line.

Podkolzin nearly scored his third goal of the night midway through the second period, but was denied. As prospects expert Cam Robinson points out, he was on a mission:

Vasily Podkolzin is on a mission tonight.

Now, let’s talk about Podkolzin’s playmaking. Check out this pass he makes to a teammate after driving hard to the net:

Keep an eye on Podkolzin (#19) on this shift. As Chris Faber shows below, he made four amazing passes in about 30 seconds:

And if you’re still not impressed, check out this next video narrated by @CanucksLottery. It shows off his defensive awareness and toughness:

Podkolzin and his Russian teammates will get a stiffer test on Wednesday, as they play undefeated Sweden in their final game of the round robin at 5:30 pm PT on TSN. Canada has a night off after throttling Switzerland, as they play Finland on New Year’s Eve (3 pm PT on TSN) with first place in Group A on the line.