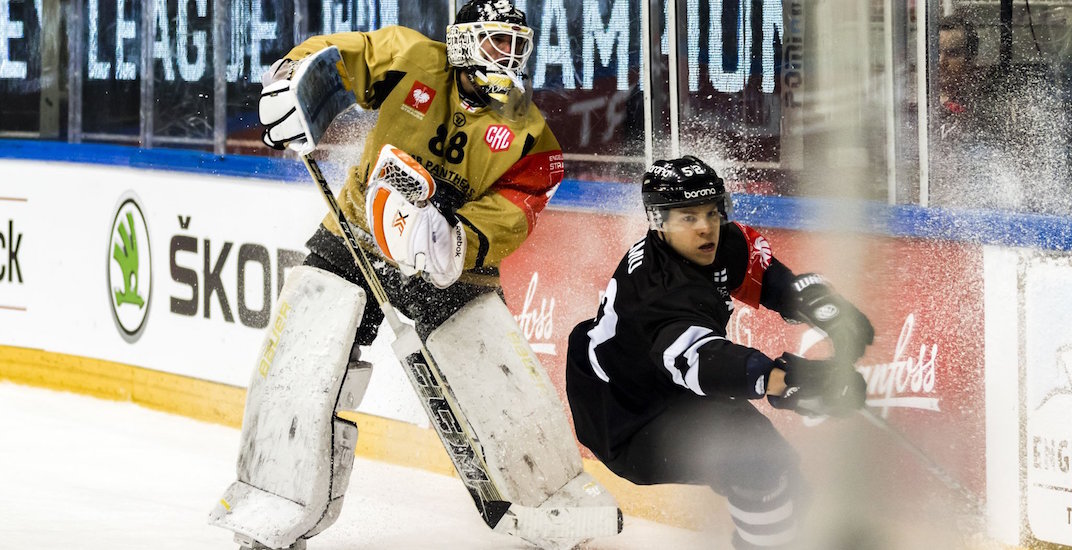 When the Vancouver Canucks were on the clock to make the 181st selection in the 2017 NHL Draft, they did something exciting and encouraging, and something fans weren’t necessarily expecting.

They picked up Petrus Palmu, a 5-foot-7 winger who was passed over twice in previous drafts, from the OHL’s Owen Sound Attack.

What may not seem special on the surface was an extremely smart move. With relatively few picks in a long rebuild, the Canucks took a chance on a small 40-goal scorer, giving them a prospect with high upside very late in the draft.

Today, the pick is looking even better.

The 20-year-old prospect, named rookie of the year in the top Finnish pro league, signed an entry-level contract with the Canucks and looks poised to make an impact on his second stint in North America.

Now here comes the best part: if Palmu’s first professional season is any indication, he’s got what it takes to become a major success story.

Palmu’s most glaring issue is obviously his height. Even in today’s NHL, where smaller players are thriving, 5-foot-7 seems extremely small – some might even say it’s too small to play in the NHL. But, Palmu, listed at 180 pounds, might be able to prove all doubters wrong.

Interestingly, one of his standout attributes is his high-energy style coupled with physical play. While he won’t run around throwing big hits, he doesn’t mind getting into traffic and engaging in board battles.

And when he does, he often comes out with the puck on his stick.

In the sequence below, Palmu chases after a dump-in and doesn’t slow down until he reaches the puck. When he gets there, he uses two quick stick-lifts to make sure he gets the puck. Pressured by two opponents along the boards, he displays excellent lower-body strength along with quick hands and strong awareness, allowing him to stay in possession.

He does eventually fall down, but only after being slew-footed by his opponent.

Note: Palmu is #52 in black/white in all of the video clips.

This isn’t a rarity either. Palmu engages in board battles frequently, and usually finds a way out.

Below is another clip where Palmu gains possession in the corner and carries the puck up the boards. Pressured by two opponents, he cuts quickly to the middle, then drives to the net, and finishes with a fantastic snap shot.

Palmu isn’t afraid to cause trouble in front of the net either. Of course, he’s not someone to stand in front of the goaltender while defencemen struggle to move him out of the way. Instead, he goes to the net at exactly the right time to screen, get open for a deflection, or be ready for a rebound.

Check out this clip.

A few more inches wouldn’t hurt his frame. But Palmu sure knows what he can and needs to do to overcome this deficiency.

Another hugely important attribute is Palmu’s outstanding hockey IQ, which helps him in all three zones, especially offensively.

Watch how Palmu enters the zone without the puck and constantly moves around to get open, even if he doesn’t end up receiving a pass.

Palmu is constantly on the move and works hard to present a passing option at all times.

He doesn’t need to be deep in the offensive zone to show off his smarts either.

In the sequence below, Palmu is covering his man in the defensive zone but notices that his teammates are winning the board battle in front of him. Instead of sticking with his man and adding pressure to his own teammates, he stays back to ensure his team has secured possession before taking off with a quick burst, getting open for a bank pass for a two-on-one scoring chance.

Even after entering the offensive zone, Palmu displays great awareness and a strong sense of defensive responsibility. Take a look at this clip:

Here, Palmu carries the puck up the right wing and into the offensive zone and fires a low shot at the goaltender’s pads to create a rebound. When the puck ends up in the corner, he moves over to present a passing option for the puck-carrier. He then opens up to view the entire offensive zone, sees his left defenceman jumping in on the play near the left-side boards, and plays a perfect tape-to-tape pass cross-ice.

With the D-man now deep behind the goal line, Palmu supports the defence perfectly, staying back at the blue line and covering the middle of the ice. He anticipates the turnover and ends up being the first player back, intercepting the puck in the neutral zone.

That’s some high-level offensive awareness, vision, and defensive anticipation all in one 20-second sequence.

3. Aggressive on the forecheck

Palmu’s hockey sense is not only evident when his team is in possession. He’s equally smart and aggressive on the forecheck.

At first, he wants to close down the passing lane. But when he notices his teammates coming in while his opponent is still a few feet away from the puck, he decides to drive into the corner and challenge the puck-carrier.

Thanks to his quick feet and decision-making, he stops the breakout and creates a puck battle deep in the offensive zone.

With his team in possession, Palmu goes to the net, trying to get open for a scoring chance. But when the puck gets loose and an opposing defenceman picks it up behind the net, he reads the play and quickly attacks the puck-carrier, preventing him from playing a breakout pass.

The d-man does find a teammate with a bank pass behind the net, though, so Palmu needs to react. He quickly races back to close down the middle, again preventing a breakout pass.

While this play does not result in possession for Palmu or his team, it does prevent a couple of breakouts and keeps the puck in the offensive zone, allowing his team to regroup.

4. He knows how to score

While all of the above is very nice to have in any player, and especially one of Palmu’s stature, he won’t make it to the top without scoring upside. Thankfully, he’s not aspiring to be a bottom-six shutdown player anyway.

Palmu, who recorded 36 points (17-19-36) in 59 Liiga games this season, knows how to create scoring chances for himself and his teammates.

He doesn’t have elite puck skills, but thanks to his skating and hockey sense, he can frequently create danger in front of the net.

In the clip below, Palmu skates with the puck behind the net, pressured by a defenceman. Thanks to his strong puck-protection skill – note how he spreads out his legs to have a strong stance while putting out his left arm to keep his opponent away – and agility, he shakes the defenceman loose and creates room for himself in the corner.

From there, it’s one quick move and he’s gone:

As outlined in multiple instances above, Palmu’s hockey IQ helps him enormously. He frequently moves around the offensive zone to get open, and he possesses the ability to be in the right place at the right time.

Plus, he’s got the hands to finish plays off.

Below are two of Palmu’s goals, one on the power play and one at even strength, where he reads the play well, gets into position, and scores on the same quick deke to the backhand.

Palmu possesses great vision as well. He may project more as a goal-scorer, but he sees the ice extremely well and knows how to find teammates with accurate passes.

Here’s just one example to illustrate that skill:

Palmu opens up in the corner to receive a pass, and constantly keeps his head up to find a passing option. He sees one of his defencemen jumping in on the play and sets him up with a perfect pass into the slot.

When the Canucks scooped Palmu up 181st overall, they had nothing to lose. A small winger who scored 40 goals and 98 points in the OHL is exactly the kind of player teams should target in the late rounds.

And so far, it’s worked out well.

Of course, none of this guarantees that we’ll ever see Palmu play regularly in the NHL. However, despite his small frame, he has proven that he can succeed in professional hockey, and that the North American style might be a better fit for him than many might have expected.

Chances are that Palmu will spend the 2018-19 season with the Utica Comets in the AHL, getting used to the different style and further developing as a player. He will need to prove that he’s got what it takes to play at the highest level.

But when he does, be ready.