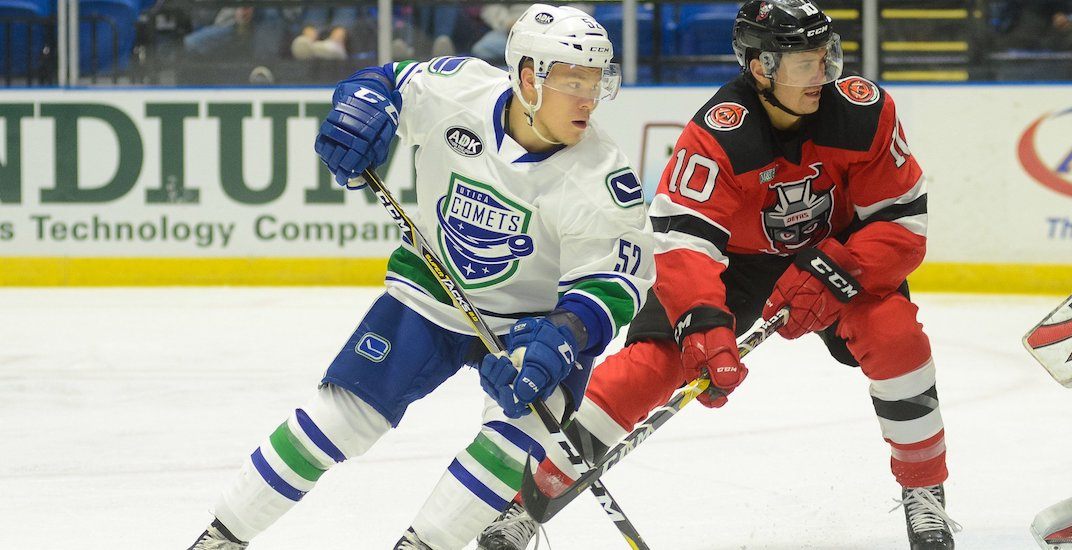 After just 12 games with the Utica Comets, Petrus Palmu is going home.

The 21-year-old Canucks prospect had trouble getting into the lineup in his first AHL season. Palmu is going back to his native Finland, to return to the country’s top pro league where he was the Rookie of the Year last season.

There was a numbers problem in Utica to start this season, resulting in a few Canucks prospects being healthy scratches. Palmu, along with Kole Lind, Jonah Gadjovich, and Lukas Jasek, were scratched on multiple occasions by head coach Trent Cull in the team’s first six games.

Lind and Jasek eventually saw more minutes, but not Palmu. Gadjovich, a second round draft pick in 2017, has been used sparingly as well.

Palmu scores his second to put #Canucks up 5-0 pic.twitter.com/twIxxFrXFf

Despite a promising display at Young Stars in Penticton, Palmu has seen fewer games with the Comets than 21 other players, a puzzling move for a player with some promise. Even as injuries and call-ups piled up in November, Palmu was often in the press box instead of on the ice. He played in just six of 13 games last month. And since the team has returned to health, Palmu has been inserted into the lineup just once since November 23.

Palmu's agent Todd Diamond : Both sides agreed that this was the best move. Jim Benning is on board with the decision." #Canucks

Diamond : "Young players have to play, Petrus is relieved. He is a competitive guy and just wants to play. He is still apart of the Canucks future, yes I believe that." #Canucks

Palmu was a sixth-round draft pick in 2017 mostly due to his size. Listed at 5-foot-7 and 179 pounds, Palmu proved he could score at the junior level in the OHL and in pro hockey in Europe.

Palmu had no goals and just one assist in 12 AHL games – which ignites the chicken or the egg debate.

Was Palmu not given much opportunity because of his play, or was he not given an chance to prove he could play?

By sitting 16 of 28 games, it would seem he wasn’t put in a position to succeed.

Palmu is far from a sure thing, but he has potential. The goal with the Comets ought to be developing their young players, which appears to be lost on this regime.

The Canucks will retain Palmu’s rights, and perhaps he gives the AHL another shot next season.