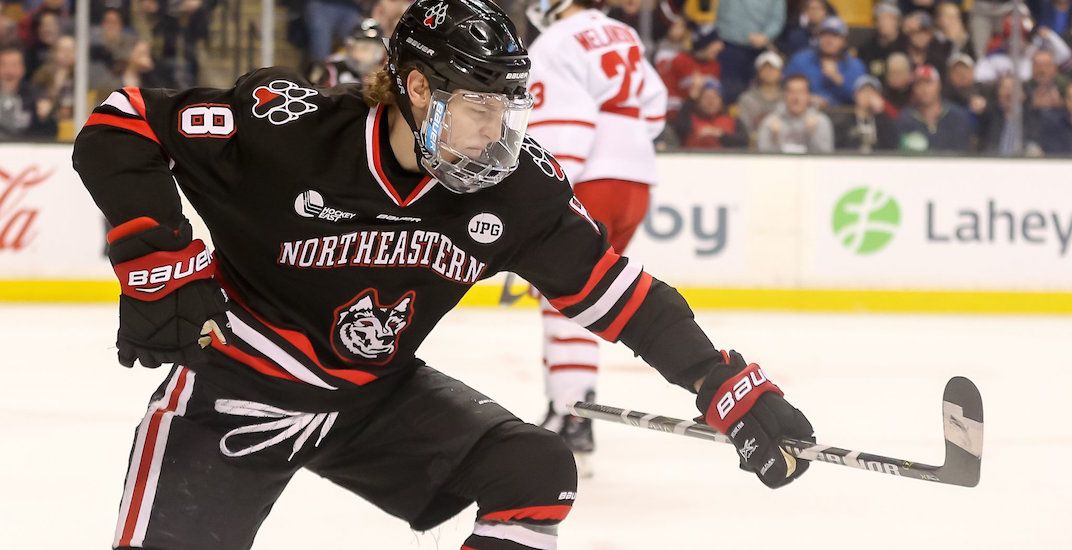 The stock of Adam Gaudette continues to rise.

Selected in the fifth round by the Vancouver Canucks in the 2015 NHL Draft, the 21-year-old centre is having an outstanding season with Northeastern University in the NCAA.

On Monday, Gaudette had perhaps the highlight of his breakout season in the Beanpot – an annual tournament played by the four major colleges in Boston. He scored three goals in a 5-2 win over Boston University in what was Northeastern’s first Beanpot victory in 30 years.

His first goal gave his team their first lead of the game, 2-1 late in the first period.

Adam Gaudette lights the lamp to give Northeastern a 2-1 lead over BU in the 2018 Beanpot final. See if the Terriers can mount a comeback on NESN. pic.twitter.com/KrvSEPshQ1

You can see the excitement of Gaudette as he realizes the magnitude of his second goal, which gave Northeastern a 4-1 lead in the second period’s final minute.

Adam Gaudette again! Northeastern takes a 4-1 lead into the third period of the 2018 Beanpot final. See if Boston University can mount a huge comeback on NESN. pic.twitter.com/Eu3IOeOrv4

Gaudette’s first two tallies came on the power play, with the third goal an empty netter after a great hustle play to seal the deal.

Adam Gaudette scores an empty-net goal to complete the hat trick and give Northeastern its first Beanpot title in 30 years. pic.twitter.com/CBd1FB98Cw

Gaudette also had three points (one goal, two assists) in Northeastern’s 3-0 win over Boston College in the first Beanpot game, giving him six points in the two-game tournament.

Unsurprisingly, Gaudette was named the Beanpot MVP for his efforts.

Gaudette and Northeastern still have their sights set on the larger goal of making it to the Frozen Four (something the program has accomplished only once in their history) where they would compete for their first-ever national championship.

It clearly meant a lot to Gaudette, who said he would rather win the Beanpot than play for the U.S Olympic team, which he was considered for.

His work this season is still far from over, but for a moment at least, Gaudette can relish in what has been a standout season thus far.

After a breakout season in 2016-17, Gaudette has continued to build on his success and currently leads all NCAA skaters with 47 points in 30 games.

Northeastern has just four games left in their regular season, and Gaudette needs five points to match the 52 he produced last season.

However, this season’s production is already more impressive because he has been producing at a higher point-per-game rate, and doing so without Zachary Aston-Reese, who led the NCAA last season with 63 points.

After being selected 149th overall in 2015, Gaudette’s stock has quickly risen in the past two-and-a-half years.

Recently, he was ranked No. 26 on TSN’s Top 50 NHL-affiliated prospects list, and ranked third on that same list among Canucks. Only Elias Pettersson and Olli Juolevi were above him, though I would argue Thatcher Demko was criminally underrated on the list and should also be placed above Gaudette.

Still, it’s very impressive when a player picked just inside the top 150 of a draft ends up being one of the best 50 prospects in the world.

With this being his third season at Northeastern, Gaudette – if he wanted to – could play one more season in college and then sign with whichever team he wanted in the summer of 2019.

Don’t panic though, because it doesn’t seem like Gaudette wants to do that. He told TSN 1040 in January that he wants to play for the Canucks since they had faith in drafting him, so he’ll likely be in blue and green soon enough.

How soon is still up for discussion. The Canucks could choose to sign him after his season with Northeastern concludes and get him into some games before the end of the 2017-18 season, much like they did with Brock Boeser last year.

That would burn a year off his entry-level deal, but would also guarantee Gaudette is a Canuck, and also give him an idea of how ready he is for the NHL level and what to work on in the offseason.

Given how well it worked out for Boeser, I’d expect the Canucks to go that route, but they could also sign him in the offseason so his three-year contract doesn’t kick in until the 2018-19 season.

The Canucks also could technically choose to let him play his final year at Northeastern, but there is little sense in that. That would bring the unnecessary risk of Gaudette possibly signing with another team (although he said he wouldn’t).

Besides, if this season is any indication, Gaudette has nothing left to prove at the college level.