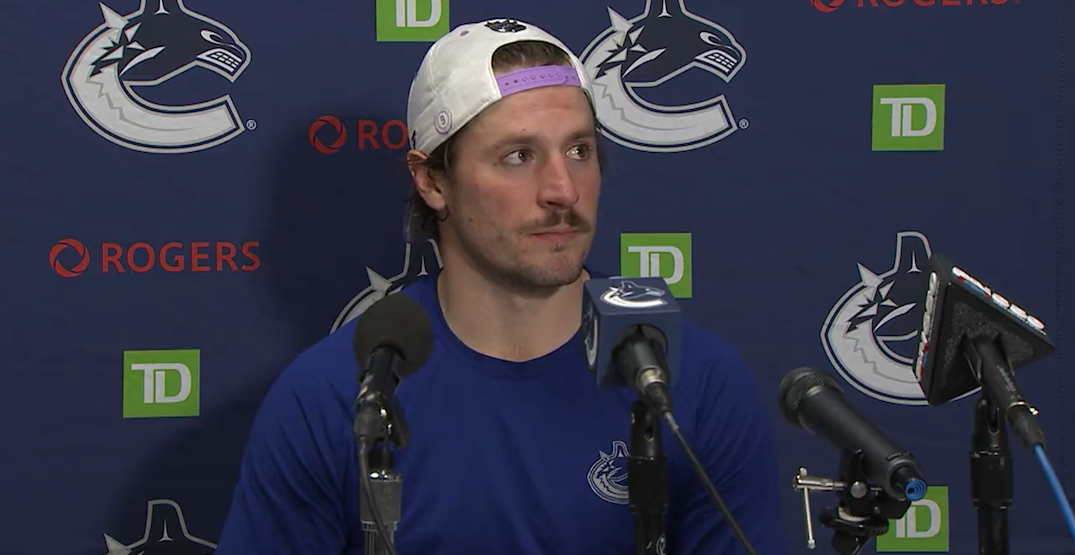 J.T. Miller speaking to reporters in Pittsburgh after another loss (Vancouver Canucks)

It was a simple question that is usually answered easily by NHL players.

Sometimes they’re lying through their teeth, but hockey players are well trained in how to speak to the media.

That’s why when J.T. Miller couldn’t or wouldn’t answer a question about his team Wednesday night in Pittsburgh, it said everything.

The emotional leader of the Canucks, Miller isn’t afraid to tell it like it is. It’s why he was the one to stand up for his teammates following last season’s COVID outbreak.

Asked after the game by Thomas Drance of The Athletic if he and his teammates were competing hard enough for one another, Miller first let out a deep sigh.

“Ah man, I don’t know,” Miller said. “We could probably do that a little more consistently, if I’m speaking honestly. When things aren’t going well for this amount of time, it’s really, really hard mentally to stay the course and use our process to win games… It comes from moving your feet and competing. I think when we get everyone to buy in, we’re a really hard team to play against.”

But the follow-up question was the most telling.

“Is everyone buying in right now?” Drance asked.

What followed was four seconds of silence, a look around the room, and mumbling, “I don’t know,” which seemed to suggest he didn’t know how to answer the question without throwing his teammates under the bus, or telling a bold-faced lie.

But we know the answer.

NHL players usually bristle at the thought that they aren’t competing hard enough. Questioning their team’s effort level is usually a no-fly zone for players and coaches, and yet this season it seems to be an open question.

It was questioned as early as the fourth game of the season when the Canucks were embarrassed by the Buffalo Sabres, of all teams. The Canucks’ effort was questioned again after a 3-1 loss to the Pittsburgh Penguins, in which Vancouver needed Thatcher Demko to be sensational in the first period just to keep the game scoreless.

Miller indicated that he’s not worried about the outside noise, but it’s becoming increasingly clear that there’s a whole lot of noise inside the Canucks’ dressing room right now too.

Miller cares, that’s clear, and he’s one of the few Canucks forwards this season producing to his standards offensively, with 19 points in 20 games. But the debacle in Pittsburgh had to hurt extra for Miller, who is from nearby East Palestine, Ohio. His family was in the crowd.

“I’m worried about our team playing well, being competitive and winning hockey games. It’s the only thing I’m focused on,” Miller said. “I could care less what everybody else says. I don’t really care what you guys [the media] say either. No offence. I’m worried about one thing, and that’s winning games.“