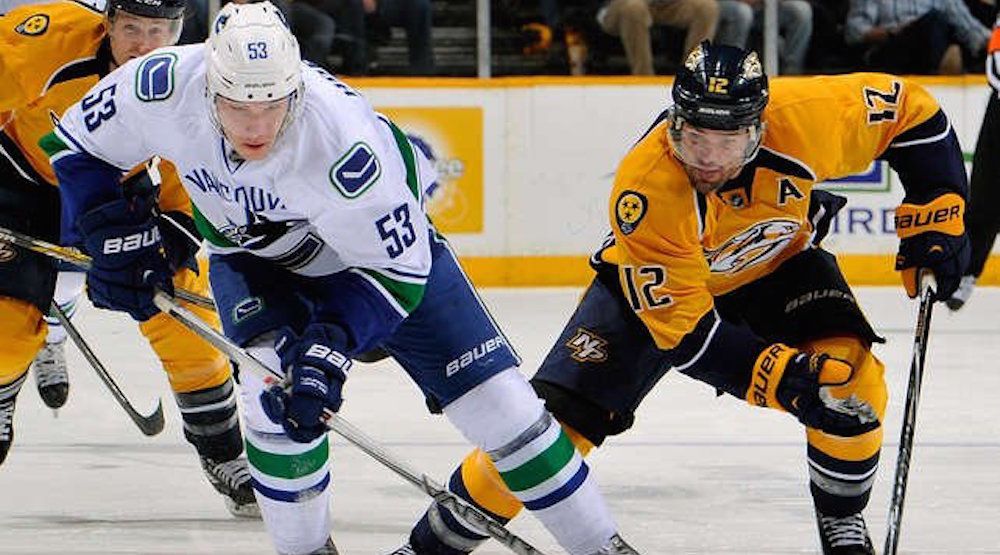 The Canucks did their best Columbus Blue Jackets impersonation for six games – defeating everyone in their path – but all good things come to an end. Vancouver’s streak ended in Calgary on Saturday.

The Canucks will look to start a new winning streak in tonight Nashville against a Predators team that has been underwhelming this season.

Chris Tanev is back from injury while Ben Hutton continues to remain on the shelf. The Canucks will start this one with Loui Eriksson on the top line with the Sedins, while Jayson Megna moves to Brandon Sutter’s line.

So Canucks' fans… Does the way the Canucks played in Calgary convince you the road record will turn around?

It wasn’t really all that surprising that the Canucks six-game winning streak came to an end on Saturday night in Calgary. Vancouver was missing their best defenceman in Chris Tanev and they have been absolutely abysmal on the road. It was almost an inevitable end to a much needed winning spell.

Have to think it's guaranteed loss night for #Canucks. They're not playing well (despite wins), no Tanev, and they've been terrible on road.

The Canucks have a horrible 5-13-1 record away from Rogers Arena.

If Vancouver is to possibly to remain in the hunt for a playoff spot, they absolutely need to start winning on the road and they must be aware of this by now.

Look for the Canucks to come out strong tonight given their recent play and their understanding that .500 on the road, at the very least, must be achieved from here on until the end of the season.

Willie Desjardins should be basking in the glow of a good run of late, but, instead, he is again being questioned on player utilization.

The biggest issue with Willie is that he makes bizarre decisions in regards to player usage and then, when asked about them, gives explanations even more absurd than the acts themselves.

Anton Rodin amazingly played 0:00 in Saturday night’s game against the Calgary Flames. This is simply something that should never happen at the NHL level, let alone on a team that has Jack Skille, Michael Chaput, and Jayson Megna playing regularly.

Watch for the coach to roll four lines and keep the playing minutes fairly standard tonight in Nashville.

There hasn't been a player in the NHL this season to dress and not play. Rodin has 0:00 tonight.

For those of you who aren’t up on goalie statistics, HDSV% refers to High Danger Save percentage. A goalie that saves a higher percentage of high quality scoring chances obviously gives their team a better chance to win. The bottomline is that Rinne has not provided #1 goalie level goaltending for the Nashville Predators and this is the single biggest reason for their mediocre record.

The Preds have been struggling of late, having lost six of their last eight games.

Keep your eyes on Port Moody native, Ryan Johansen, who leads Nashville in scoring with 29 points (7 goals and 22 assists). Nashville is currently without PK Subban, who is out with an injury, but they’re still strong on the back-end with the likes of Roman Josi and Matthias Ekholm.

The Canucks have been horrible on the road this season, but it is hard to deny that the team, in general, is playing with a lot more confidence. I like the Canucks chances tonight in Nashville. The Canucks take this 4-1, Willie Desjardins rolls four lines, and everyone is happy for at least one evening.