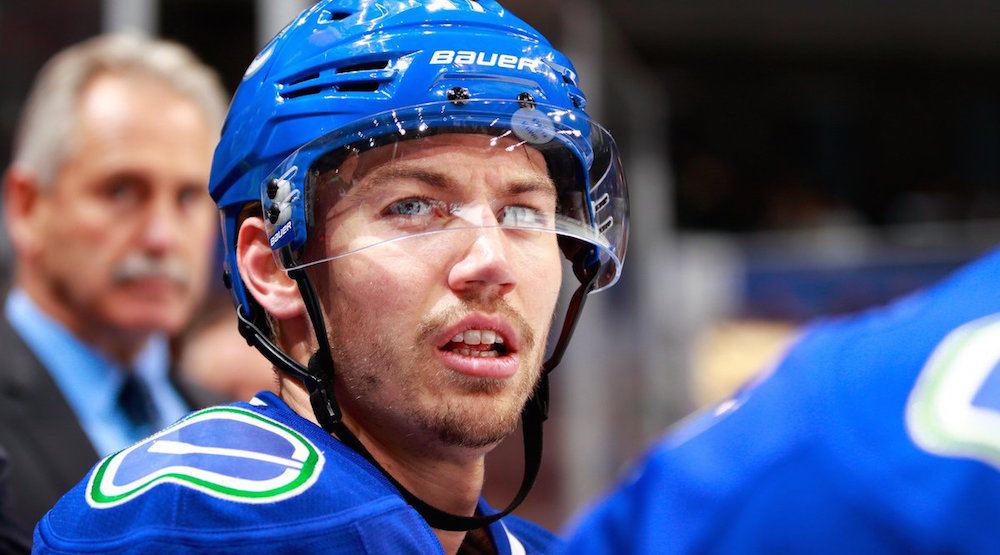 Since Saturday’s game against Calgary, the Anton Rodin story has taken on new life.

Rodin, who led the Swedish Hockey League in scoring last season, was dressed as Vancouver’s 13th forward yet he didn’t play a single shift. The Canucks lost by a 3-1 score, meaning they could’ve used some scoring help, by the way.

On Monday, Willie Desjardins spoke to the media about what went down in the game.

A quick recap in case you weren’t watching: Vancouver dressed five defencemen and 13 forwards because both Ben Hutton and Chris Tanev were injured, with Hutton’s status being a last minute revelation.

First, Desjardins explained why the team went with five defencemen instead of calling one up from Utica.

“We have two guys I thought would probably be ok to play [Chris Tanev and Ben Hutton]. When they say it’s 50/50, then it’s like you’ll probably get one of them back…

Utica was going into Hershey, they’re not getting in until 3 am. So the guy’s going to have to fly all day to get here an hour before the game. If you do that, how much better is that guy going to be in the lineup than if you had to go with five D?

Desjardins was then asked about Rodin and why he didn’t get to play a single shift.

“The reason we dress another forward is if I have to play a forward on defence, then we have a guy to make up our lines.

Rodin banged up his knee the night before. He wasn’t 100 percent. Once he sits past 10 minutes, it’s hard to get him back in.

Desjardins continued, and this one might hit you harder.

“My thing is they want me to put in a guy I’m not sure of and it’s hard to play a guy when you don’t know exactly where he’s at.”

If the “they” made you do a double take, you’re not alone. Is Desjardins talking about management?

“I think [Rodin’s] got good skill. Once he gets confident and that, I think he can help us. But his confidence – where should he play? He’s a power play guy. Do you pull somebody out right now, put him on the power play?

The first game he played, I put him on the power play, he went right in. I don’t think that was the best for him. He wasn’t ready for that.

It’s hard for both of us – for the team and him, but he’s got to stay with it and when he’s feeling at the top of his game we’ve got to give him a chance to play…

He came back from Utica on the 23rd or whatever, so he’s had like four or five practices with the team. That’s all he’s had. Could he be the best player he can be with just that? It’s hard to.”

In case you forgot, the Canucks are playing Jayson Megna on the power play right now. Serious question: will Megna ever be ready for that?

“I see Rodin as being a top-nine forward. That’s his ideal spot. He may have to play fourth line sometime just to get going, but I think he’s a top-nine guy when he gets going…

Did he play good? Yeah he did, but Burrows is back. Burrows helps Horvat and Baertschi. He just helps them, just his nature, the way he comes to the game…

I met [Rodin] this morning – his chance will come with our team. He is a player I want to get going because I believe he can help us… I told him you’re going to have to be patient.”

The other thing Desjardins said is he didn’t want to play Rodin instead of Jack Skille or Brendan Gaunce because that would hurt all three of them – Gaunce and Skille have been playing well and Rodin was coming in cold.

And he couldn’t put Rodin in for Burrows because Burrows helps Horvat and Baertschi.

The funny thing about all this is Desjardins didn’t mention Megna’s name once. Megna, who has been playing on Vancouver’s top line since Jannik Hansen was injured, hasn’t stood out by any means, and on Saturday he switched spots with Loui Eriksson.

Megna still played over 15 minutes on Vancouver’s second line, and he turned a couple of grade A scoring chances into easy saves for Calgary’s goalie.

So what can you take from all this?

Like Sven Baertschi, eventually Rodin will get his chance. Desjardins clearly thinks he has potential.

Canucks fans will have to be patient, though.

This isn’t waiting for the snow to melt in Vancouver level patience, either.

This is sitting through Megna on the power play and top forward lines – a truly grueling test.