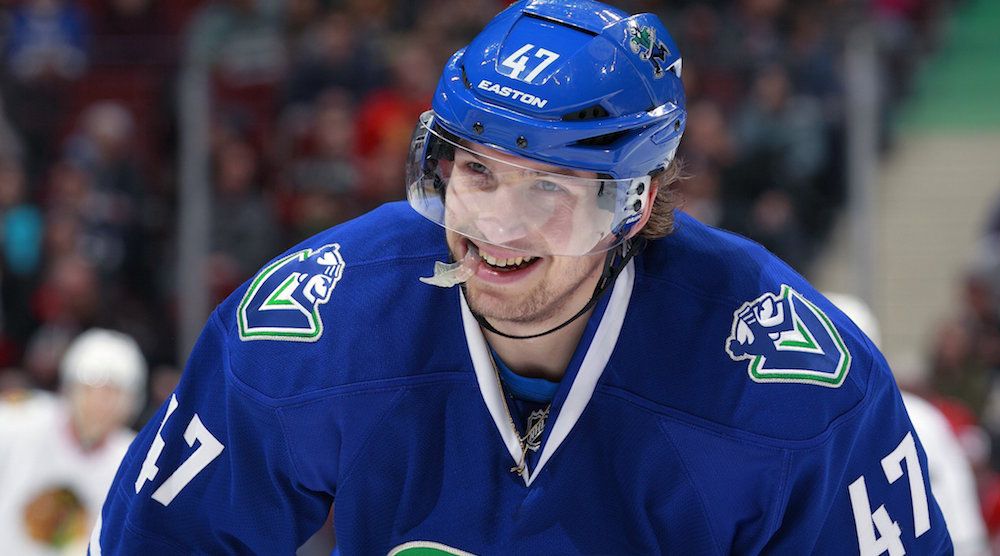 The idea that Sven Baertschi’s season turned around when the Canucks made him a healthy scratch on December 11 is never going to go away.

He had three points in his first game back against the Carolina Hurricanes and has 12 points in 13 games since the scratch. He had just 11 points in 26 games before that. What a stroke of genius from the coach, right?

With all this talk of the results of scratching Baertschi, I wanted to find out if his season really did turn in that moment. Has his game been that much better since, or is he getting better bounces and riding a streak of good luck?

As of Saturday’s game against the Flames on January 7th, Baertschi has played 39 times this season.

Because he’s played exactly 13 times since the night of the scratch, I split his 39 games into three 13-game portions to compare how he’s done in each period – two before the scratch, one after.

The first thing to look at is production. Here are Baertschi’s primary points per game at even strength.

Primary points include only first assists and goals, not second assists. Primary points are a better indicator of talent and who’s driving play than total points.

Clearly the 24-year-old Swiss winger’s production has jumped by huge increments over each period.

Expected goals is a probability based measurement of goals, taking into account shot locations and other factors. Like the graph showing Baertschi’s primary points, this one also shows an increase each period.

The jumps are not nearly as dramatic, though.

What that tells you is Baertschi’s early season issues weren’t as dire as they looked on the scoresheet. Despite putting up just one even strength point in his first 13 games, he was playing well. The puck just wasn’t going in the net.

This graph, showing his even strength shooting percentage, helps explain why.

It’s no coincidence the shape of this chart so closely resembles the first one showing Baertschi’s primary point production.

As his shooting percentage has climbed, so has his point production.

You should also realize a shooting percentage of 18.64 is the type of number only the league’s elite scorers maintain. Baertschi’s goal production since being scratched is inflated by this.

What all this tells us is Baertschi’s recent points streak is more than just a jump in puck luck and favourable bounces.

The underlying numbers show he has been playing better since he was scratched on December 11 – he’s taking better shots, going to higher percentage scoring locations, and making more plays.

Watching him play, you can see he’s playing with more confidence and taking more initiative with the puck. Unfortunately, the question remains – is he better because he was scratched?

With his confidence being the key outcome, another thing to consider is the player’s role.

Looking closely at Baertschi’s even strength ice time and linemates, there’s no difference since the start of the season.

But looking at his power-play time reveals a stark contrast:

Baertschi has been playing on the first unit power play since December 13 – his first game back from press box purgatory. Before that, he was on the second unit.

Playing nearly two extra minutes of power play time per game with the team’s top players, the Canucks have shown Baertschi he is a go-to guy for offence.

So while you could point at the scratch as a key motivator, you have to consider – had he been switched to the first unit on December 11 instead of being scratched, it’s highly likely his turnaround would’ve started two days earlier… no “tough love” required.