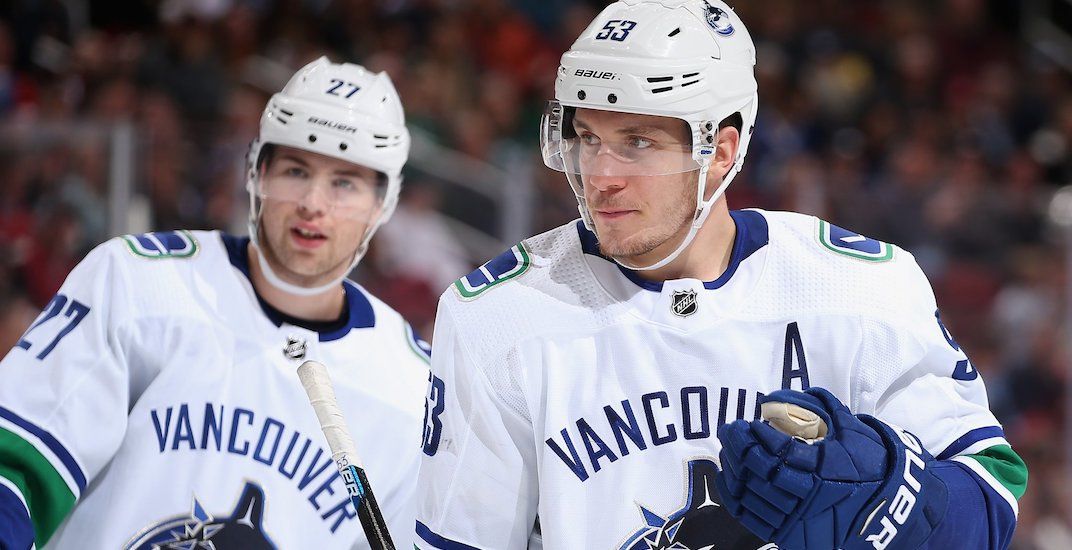 It was fun while it lasted, wasn’t it?

Barring a minor miracle, the Vancouver Canucks will miss the playoffs for a fourth-straight year in 2019.

While this season certainly feels better, with young players like Elias Pettersson, Brock Boeser, and Bo Horvat taking over in the post-Sedin era, Canucks fans will likely have to wait at least another year before experiencing playoff hockey again.

On pace for 78 points this season, the Canucks are on track to finish with more points than they’ve had in any of the previous three years, though that’s a low bar.

The Canucks played meaningful games in February for the first time in four years – the problem was they lost most of them. Vancouver has won just three of their last 14 games, slipping to 26th-place in the NHL standings.

After Sunday’s pathetic performance in Vegas, the Canucks are eight points out of a playoff spot with five teams to leap over. Sports Club Stats currently lists the Canucks’ chances of making the playoffs at 1.3%.

In short, it’s not happening this year, friends.

While a playoff appearance would have been fun, at least in the short term, it’s probably in the best long term interest of the Canucks to get another high draft pick. In other words, this could end up being close to the best case scenario for the team this year: give the fans some excitement, stay in contention until late in the season, then free-fall into a high draft pick.

That’s the sad reality of where the Canucks sit in Year five of Jim Benning’s tenure.

While Benning has had significant success at the draft – Pettersson and Boeser are legitimate stars in their early 20s – the Canucks GM hasn’t had much success in any other area.

Many of his high-profile acquisitions have blown up in his face, proving his many naysayers correct.

The team’s fourth line, which currently includes Loui Eriksson and Jay Beagle, is costing the Canucks nearly $10 million in payroll.

Brandon Sutter, who turned 30 last month, isn’t the “foundational player” he was billed to be, and is under contract for two more years with a contract that never made sense.

Benning has essentially admitted he was wrong on Luca Sbisa and Erik Gudbranson, who are now no longer with the organization, and that’s a good thing.

Sutter, Sbisa, and Gudbranson were all players that the analytics community knew were overhyped – which calls into question the team’s approach to player evaluation.

Now, Benning does appear to have learned from some of his mistakes during his first few years as GM of the team, and if the team hits on more of their draft picks, they’ll get out of the darkness soon.

But it’s all taking longer than it needed to.

If you remove the draft from the equation, the highest-scoring Benning acquisitions on the team this season are Roussel (29 points), Nikolay Goldobin (26), Eriksson (21), and Markus Granlund (19).

This isn’t to diminish the importance of the draft. It’s critically important to the future of the team. But it’s not all that matters.

The highest-scoring acquisition since Benning took over is Sven Baertschi, who has 107 points in 215 games since he was traded to Vancouver in March 2015. His single-season career-high is 18 goals, 17 assists, and 35 points, achieved in 2016-17. Benning’s best signing might be Troy Stecher, who Benning signed as an unsigned college free agent in 2016.

So he has had wins, they’ve just been overshadowed by many more losses.

This regime resisted the need to sell off veterans at peak value for draft picks. In an effort to remain competitive, they failed miserably. With a 119-151-42 record since 2015, the Canucks have the worst cumulative winning percentage among the NHL’s 31 teams in the last four seasons.

This isn’t to say that the team won’t be better in the coming years. They will be.

The Canucks’ ‘big three’ is something to build around. Jacob Markstrom has been outstanding this season, giving evidence that they’ve got a legitimate No. 1 goalie between the pipes. Ben Hutton and Troy Stecher took steps forward this season.

Quinn Hughes should be here soon, with Olli Juolevi and whoever they pick at the draft in June not far behind.

Even then, the team won’t be out of the woods.

In 2021-22, the Canucks project to be saddled with the contracts of a pair of 36 year olds in Eriksson ($6 million) and Beagle ($3 million). Antoine Roussel has been a nice addition to the team this season, but his $3 million salary when he turns 32 in three year’s time threatens to be a regrettable deal.

Will those deals limit the team’s ability to bolster the roster around Pettersson, Boeser, and Horvat?

At some point, the Canucks will be expected to be a winning hockey team again – a Stanley Cup contender even. So the moves to support the team’s young core will be critical.

Can Benning help a blueline, of which three-quarters of their top-four defencemen are holdovers from the Dave Nonis and Mike Gillis years?

The Canucks are expected to be major players in free agency this summer, which could be risky. Another Eriksson-type contract won’t just be embarrassing going forward, it’ll threaten to eat up their salary cap and limit the team’s chances of winning.